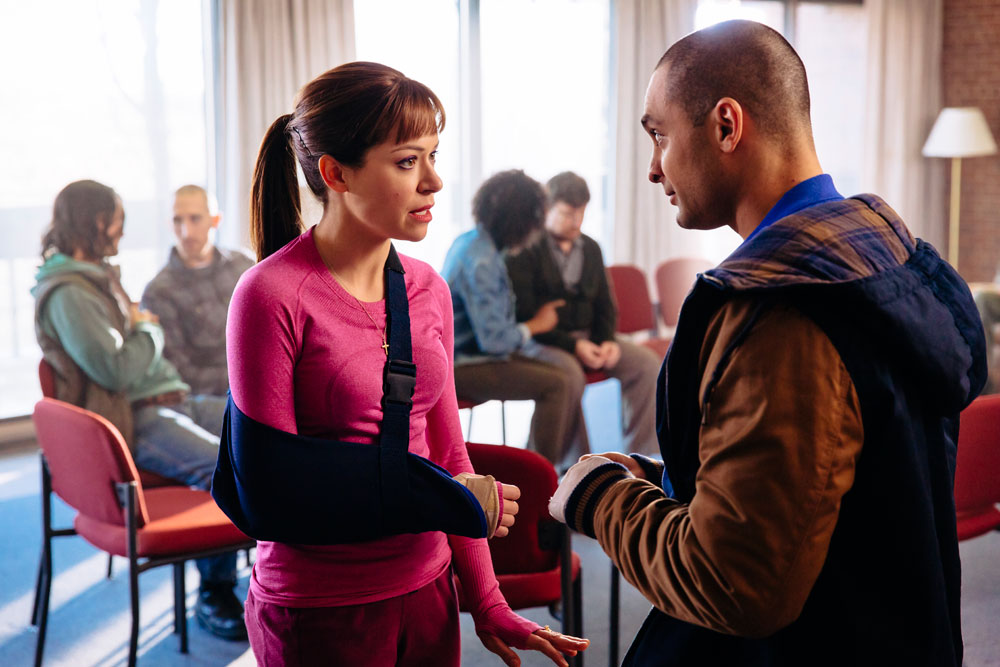 “To Hound Nature in Her Wanderings” opens on what was for me the best part of the episode — the Helena and Sarah (both played by Tatiana Maslany) road trip. I wouldn’t have complained if this had lasted the entire episode.

Helena and Sarah stayed in a tent together; Helena did shadow puppets and sang along to the car radio and it was almost like they were real sisters. Both of them could use a break like that, and it was especially good to see the two of them laughing. But of course, on “Orphan Black,” you have to be alert at all times, and Sarah and Helena’s road trip ends far too soon.

Based on the previews for last week, I expected the trip to last longer, and I’m mostly disappointed it didn’t. The format of this season — with the clones all having their own separate plotlines — doesn’t allow for much time to dwell on the little things.

“Orphan Black” is rushing forward headlong, much like Sarah, and while that’s admirable — particularly if all or most of the plotlines can be tied together by season’s end — it also would be nice to have a little breathing time, for instance to focus on Sarah and Helena’s relationship before the plot tears them apart.

While Sarah goes in a church to get information on “Swan Man,” also known as Rachel’s (Maslany) father, she leaves Helena in the car, and Helena takes the opportunity to visit a nearby bar where she runs afoul of the locals.

Watching Helena interact with “normal” people is fun since she’s not particularly good at it, and it’s heartbreaking to realize that she’s not good at it because she grew up with the Proletheans and didn’t get opportunities to socialize. This inability to socialize, of course, leads to her downfall, and she viciously attacks one of the men in the bar and tries to gouge out his eyes when he interrupts her evening. As a result, Helena gets arrested.

During their night camping in the tent, Helena accused Sarah of not caring about her, saying “If you knew where Swan Man was, you would leave me behind.” While I’d like to believe this isn’t true and that Sarah does genuinely care about her twin sister, I’m more willing to believe Helena’s comment.

Time and again, Sarah has proven that her main priority is making sure her daughter is safe — and often, by extension, trying to make sure that she will be able to take care of the girl. Everything else is secondary. Prioritizing her daughter isn’t exactly a bad trait on Sarah’s part, but it does often hurt those around her. In “To Hound Nature in Her Wanderings,” Felix (Jordan Gavaris) and Cosima (Maslany) are especially feeling like Sarah doesn’t care.

Felix has been released from jail, where he was being held on a framed murder charge, but he’s barely been out before Sarah wants him to work on finding Rachel’s father. Cosima doesn’t feel like she can tell Sarah about her illness because she doesn’t want Sarah to worry about her daughter getting sick. I like that Cosima’s plotline ties into Sarah’s worries about Kira so neatly, and it makes sense, given the fact that Cosima’s illness could theoretically happen to any of the clones — or even to a clone’s child, like Kira.

Felix’s plotline, however, frustrates me on a variety of levels. One, it seemed to come and go quickly, much like the Sarah and Helena road trip. Two, it isolates Felix too much. While the clones having their own separate plotlines makes sense because they’re the main characters of the show — and allows Maslany a break from doing the work of multiple clones in the same scene, I don’t need Felix getting too independent. If he and Sarah don’t patch up their ways, there’s a chance Felix will become superfluous, but the episode avoids that for now with Felix helping in Sarah’s search.

And ultimately, Sarah leaves Helena behind when Helena gets taken to the police station. Sarah isn’t necessarily in the wrong here. She does try to help her friends and family — she calls Art to get Helena released and to check in on Felix — but Helena isn’t wrong. If Sarah had known where Rachel’s father was, she probably wouldn’t have bothered with Helena at all.

After Helena is arrested, her plotline and Sarah’s branch apart even further than the bar and the church. Gracie (Zoe de Grand’Maison) finds Helena at the police station and offers Helena the chance to have children, and what Helena was always looking for was a family. I can’t see the decision to cooperate with the Proletheans and have children going well for Helena, but that will be dealt with in future episodes.

Sarah manages to find Rachel’s father, and surprisingly, when she goes to his house, she also finds Mrs. S (Maria Doyle Kennedy). As Sarah surmises, Mrs. S knew about the clones the entire time she was raising Sarah, which is troublesome because she didn’t tell Sarah but also good because it’s probably the only way Sarah stayed out of the reaches of the Dyad Institute. And it’s the Dyad Institute that’s evil, according to Rachel’s father anyway. He says that he and his wife loved Rachel and wanted to give her a good home. They were going to expose the cloning experiments, but Dr. Leekie (Matt Frewer) killed Rachel’s mother.

It’s interesting that the writers of “Orphan Black” are bringing Leekie back as the villain now. In season one, he was a more villainous character, simply because we thought he was in control of the cloning project, but this season has worked to subvert his villainous nature. Indeed, even Rachel dismissed him, claiming she was higher in the Dyad Institute than he was.

While we knew Leekie was involved in the cloning project — handling the clones’ monitors, doing some of the scientific research on the clones’ disease — he seemed more interested in research than killing people. Of course, he killed Rachel’s mother for the research, so the two might be more entwined than I thought. But what’s really worrying about Leekie’s potential villainy is the fact that he’s the one who allowed Cosima to start the new treatment protocol for her disease. What’s going to happen to Cosima because of Leekie’s agenda?

Based on the previews, I was worried about Alison (Maslany) this week because the writers brought back Sarah’s ex-boyfriend Vic (Michael Mando) and put him in Alison’s rehab program. In much of season one, Vic was presented as an abusive drug dealer, who was obsessed with finding out what was going on with Sarah, so I didn’t want him interacting with Alison, who is in a delicate position at the moment. But at the end of season one, we saw Vic at a rehab center, and that’s, of course, where Alison found him now.

While I was initially worried about what their interaction would bring — at least partially because I wasn’t sure how Vic would fit into the show if he wasn’t interested in Sarah anymore — talking to Vic seems to have been good for Alison. While she was her usual uptight and abrasive self during group therapy, claiming she wasn’t “an actual drunk,” Alison opened up to Vic by the end of the episode, at least partially.

And I was actually really interested in how their sort of friendship would work out. As I’ve said in previous reviews this season, Alison needs someone to talk to and someone to lean on, especially now, when her world is falling apart, and if Vic could at least partially fulfill that need, I was all for it.

But then, of course, this wouldn’t be “Orphan Black” without a twist. It turns out Vic is working as a spy, gathering information on Alison for police officer Angie. So, of course, Alison finds someone to help her, only to have that pulled away from her once again.

Alison doesn’t know about Vic being a spy yet, but I’m hoping she finds out before she gets in too deep. Being on her own without anyone to talk to is what got Alison into rehab — of course, the drinking and the drugs were also part of it — and I doubt having her trust undermined yet again will help in her recovery.

At this point in time, I’m not sure what’s going to happen in the rest of this season of “Orphan Black,” but while I’m definitely still interested, I’d like the pieces to start coming together. New elements — Vic, Leekie as the “ultimate villain” — are still being introduced, but with four episodes left in the season, they can definitely be dealt with, just as long as the writers start dealing with them soon.