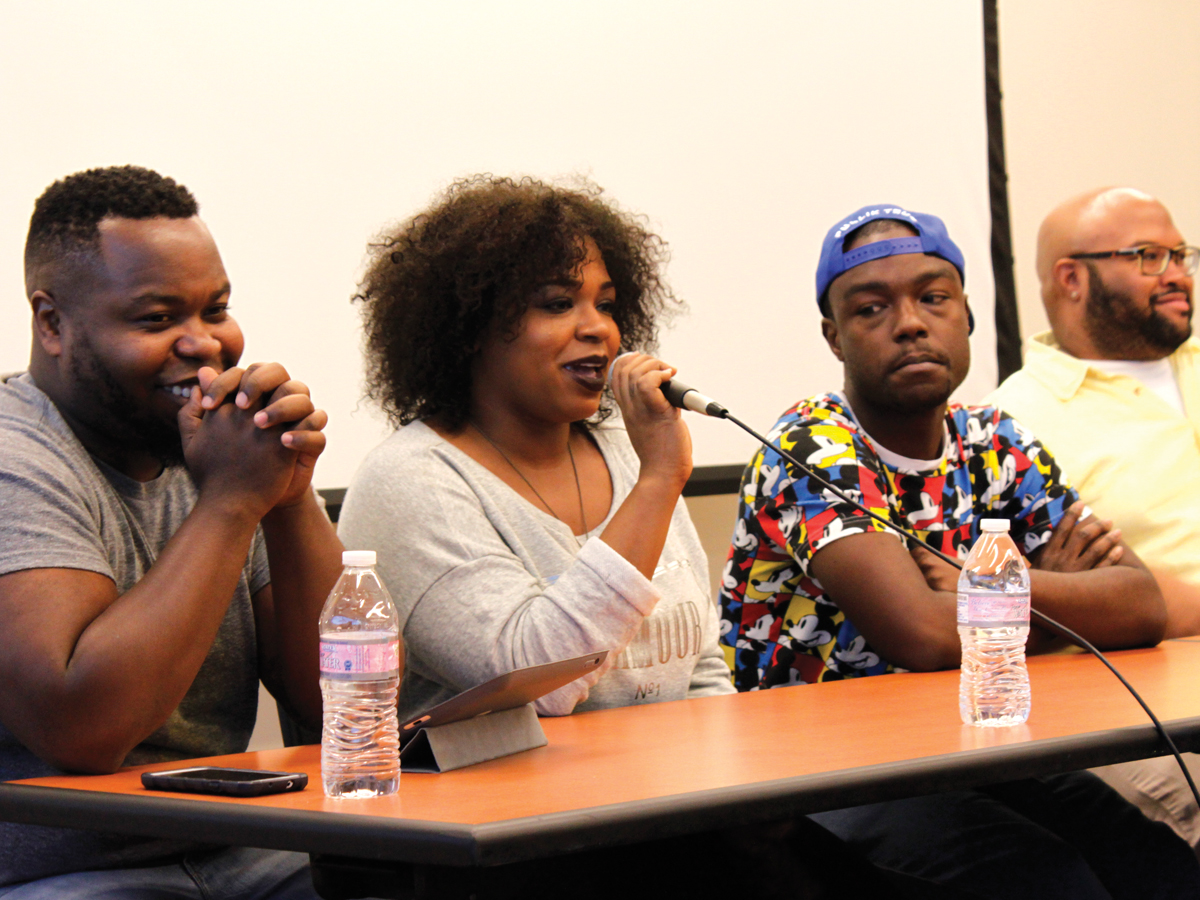 The room bustled with noise and activity as a wave of students entered after class and took their seats. Ten minutes until showtime, students had flooded onto the floor, as there were not enough seats to cater to the unanticipated audience.

After a short introduction, it was established that each speaker would share their “coming out” story in their various backgrounds. Crawley explained that by being “black and queer,” one would be living “within the folds of gender” and therefore subject to the ongoing struggles in the world today where we continue to falsely define the term “normal.” Growing up in an extremely religious household was challenging for Crawley considering his sexual identity and, even though he valued the Christian church, couldn’t help but wonder if it was just a phase: At least that is what his parents had told him.

When he came out, the only response he received from his father was that his parents would pray for him. “I realized it wasn’t a phase and decided to own my sense of sexual worth. I don’t want to be in a heterosexual marriage and depressed simply because I needed to please people,” he admitted. It takes time to learn to embrace oneself as well as their sexuality but it can definitely be done.

From a similar religious background, West began, “Homosexuality was a taboo in my household and when I started to notice other girls, I freaked out.” However, since she attended an accepting school, her friends rejoiced when she “came out” to them. West planned to keep her identity away from her parents until they discovered her yearbook and read messages referring to her as lesbian. Her parents wept and demanded to know the truth. “Once I saw how extreme they reacted, I brushed the comments off as a silly rumor at school. The whole incident made me very depressed,” she confided openly.

When her brother experienced police brutality, she saw it as the golden opportunity to finally come out to her parents. “I figured in comparison, my situation wouldn’t be so horrible!” she joked. Her mother accepted her identity as long as she didn’t cut her hair short and dress like a tomboy. Unable to contain herself any longer, West exploded, “I’m depressed and I’ve decided that I will live my life how I want and I won’t change for you.” All it took was for West to reveal her feelings and now she and her mother are on good terms.

“By the way, I’m 1,000 percent uncomfortable right now,” remarked Kid Fury while the audience laughed along. “I’ve always been an introvert and I knew something was different. I’m comfortable being feminine and I was sure everyone knew of my sexual orientation,” he announced. Fury was aware of the severity of being anything other than heterosexual in his home country of Jamaica, where it wasn’t accepted. When his parents confronted him, they simply said they would love him, but they wouldn’t accept him. This comment affected him as a child and Fury struggled to feel comfortable in his own home. “To me, sexuality was never a big deal and it still shouldn’t be; it was only made a big deal by society,” he confessed as he was welcomed by an uproar of agreements by the audience.

When his mom found out he was gay, she connected it to his unsocial nature and his difficulty in school. She was however more upset that the topic wasn’t discussed earlier to prevent his rough childhood, and from then on, Fury was grateful to have parents with good intentions.

“To be in a place where blacks and queers are accepted is such a blessing,” began Tyler. “It’s about identification, not just behavior.” He came out around his 20s and explained it was a continuous process. “My friend got disowned and I hear horror stories so I was very afraid of telling my mom,” he stated. Surprisingly, she took it very well, even though his dad’s concern was what he should tell their friends. Tyler concluded, “Don’t sacrifice your health for the comfort of others. Don’t allow the terms to define you. You define the terms.”

Gaines, on the other hand, went to a school where she was pigeonholed as an African American, a rape victim survivor and finally a lesbian. “I’m honestly not close to my parents anymore partly due to my sexuality, and partly due to my dad’s extreme conservatism,” she disclosed. The only family member that seemed to take it lightly was her grandmother. “My grandmother asked me about the sexual details of being lesbian so we sat in a Wal-Mart parking lot and I told her just that,” she laughed.

An open Q-and-A commenced, along with some encouraging comments. Some wondered if a person’s sexual identity affected his or her professional career — every panel member agreed no. Even as media personalities, Fury and West both admitted that their sexual identities are what makes them who they are today and if they were ever asked to change for popularity, the obvious answer would be no.

“If you are ever asked why you are so angry when it comes to topics like this, your response should be: Why aren’t you angry? You should be angry with all that’s happening in the world,” commented Crawley. “People choose not to acknowledge the wrong since they don’t have the will to fight it. It takes a lot of bravery to come out in today’s society,” claimed Fury as he and Crawley closed the discussion and left the audience with those two notes.

A racket of cheers concluded the eventful discussion and the audience dispersed with some newfound perspectives and most definitely some food for thought. The speakers’ insightful words seemed to loom over the crowd as it reminded us to be true to others and most importantly, ourselves.