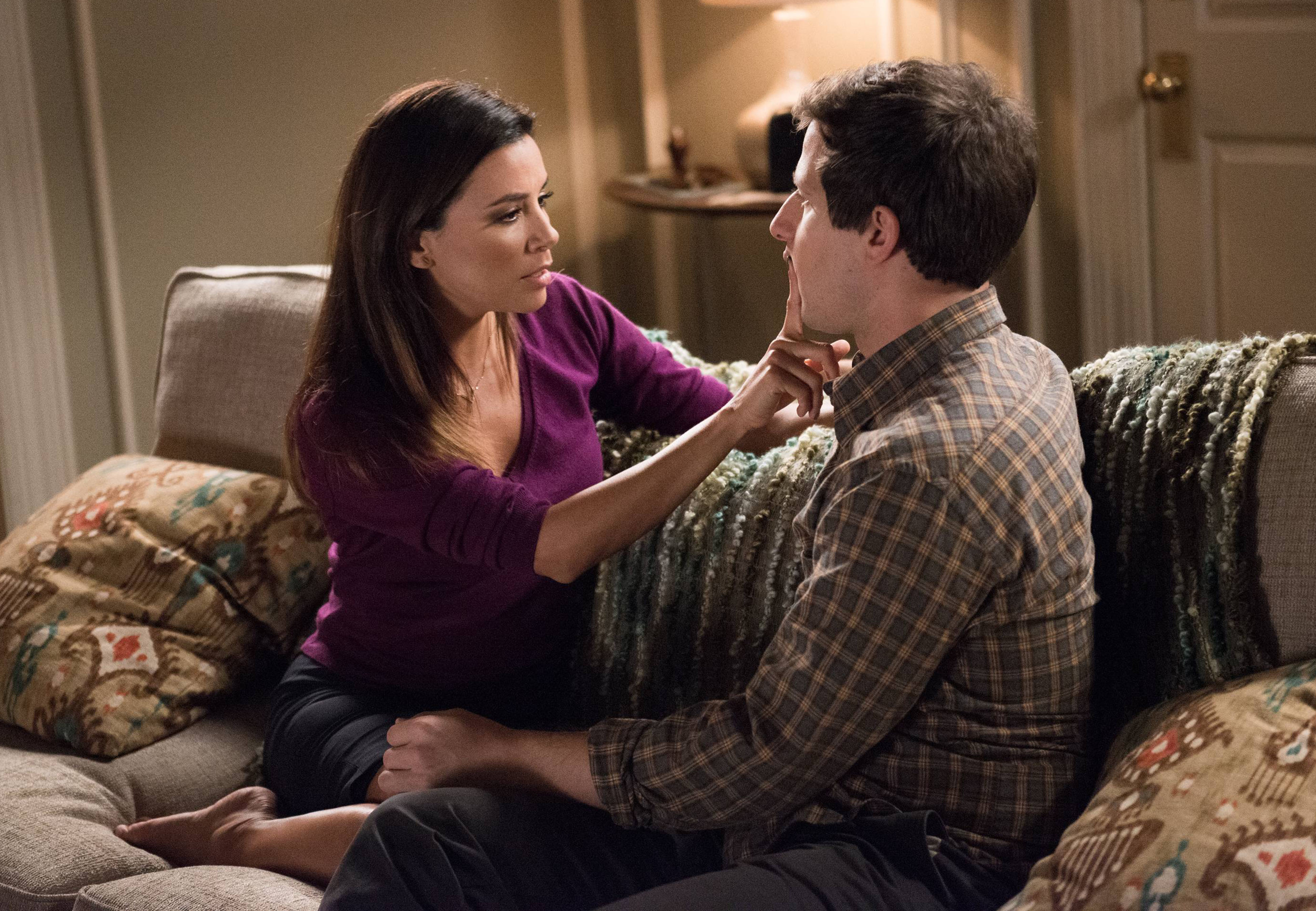 This week’s “Brooklyn Nine-Nine” reminded me why in spite of my recent misgivings over the show’s seeming lack of interest in character development I ultimately trust these writers. “Jake and Sophia” could have been another Jake (Andy Samberg)-focused episode with little else going for it, but instead, the writers took the opportunity presented by Jake’s absence from the precinct to allow other characters like Rosa (Stephanie Beatriz) and Amy (Melissa Fumero) to share the spotlight. This is the “Brooklyn Nine-Nine” I’ve been missing.

The main plot deals with Jake and Sophia (Eva Longoria), a woman Jake picks up in a bar before finding out she’s the defense attorney assigned to the criminal Jake busted for the jewelry store heist in season one. I was worried about Longoria’s appearance because we just got done dealing with another guest star, Kyra Sedgwick, but I genuinely enjoyed Sophia’s presence. She was a competent attorney, who flustered Jake and forced him to do his job rather than coasting to an easy guilty verdict.

Because I liked Sophia so much — and because this means the show might be moving beyond a Jake and Amy romance for the time being — I’m excited to see where Jake asking her out at the end of the episode leads. Although I doubt it will last long since Longoria is only signed for a three-episode arc and it might not change the precinct’s very negative opinion of defense attorneys, the relationship could be a good way to evolve the Jake-centric plotlines by taking a look at his personal life, which we haven’t seen much of in “Brooklyn Nine-Nine” so far.

At the beginning of the episode, everyone exchanges theories about why Amy would be late to work for the first time ever, and it was in that minute of show time that I realized how much I missed Amy. Of course she’s been there every episode, but like her fellow non-Jake colleagues at the precinct, she hasn’t had much to do unless it was related to the possible romance between her and Jake. I thought the episode was going to be all about Jake and Sophia, and the ensemble has taken a backseat so far this season, so I didn’t think anything was going to come of my yearning for my favorite character to have some screen time. I’m happy to say I was wrong. While Jake was dealing with Sophia in court, Amy and Rosa — with a little help from Holt (Andre Braugher) — got a plotline of their own.

The only other largely Amy-and-Rosa plot was in season one’s “Sal’s Pizza,” when Amy was jealous over the fact that Rosa was asked to be captain for a precinct in the suburbs. The episode cemented Rosa and Amy’s friendship — based on them having each other’s backs in a police force made up almost entirely of men — that hasn’t really come to the fore in any episode since, but it was in full force in “Jake and Sophia.”

When Amy and Rosa go to Holt with the complaint that Scully (Joel McKinnon Miller) is running unopposed for union representative yet again even though he’s terrible at the job, Rosa suggests Amy should run because she’d be good at it. However, Amy doesn’t want to run because she’s afraid becoming union rep would put her at odds with “the brass” and ruin her chances for being captain one day.

In spite of Amy’s misgivings, Rosa signs Amy up to run and makes campaign posters with the slogan, “Pick Amy, dummies.” For any other character, this might seem heavy-handed since it practically forces Amy to run even though she doesn’t want to, but the plot is first saved by the fact that Amy resists running anyway and because the person who wants her to run is Rosa, probably the least emotional character on the show. So if she’s willing to invest this much effort, she must really think that Amy will like being union rep and that she’ll do a good job.

And Rosa’s not the only one that thinks Amy would be a good rep. Just when I thought this plotline couldn’t get any better, Holt pulls Amy into his office for a talking-to, even though, as captain, he isn’t supposed to get involved in union affairs. He tells her to go ahead and run because he clashed with his superiors all the time due to being black and gay, and he still made it to captain. While the scene itself isn’t that exciting, it’s the emotion behind it that makes it work. I was as starry-eyed as Amy at the end because all Amy has ever wanted from Holt is his guidance — remember how excited she was when he edited her speech in “Thanksgiving” because he was “mentoring” her? — and now she’s finally getting it.

The union representative plot, aside from possibly sending Amy’s character in a new direction like Rosa’s drug task force and Holt’s conflict with Wuntch, proves once again that these characters grew a lot over the course of season one of “Brooklyn Nine-Nine,” and they can continue to grow, if only the writers give them a chance.

I sincerely hope this isn’t the last time we hear about Amy’s new union rep position — of course she got the job — but even if it is, “Jake and Sophia” proves that it’s possible for “Brooklyn Nine-Nine” to give equal weight to Jake and to the rest of the ensemble and still come out with a great episode. It’s something the show should take more advantage of in the future.