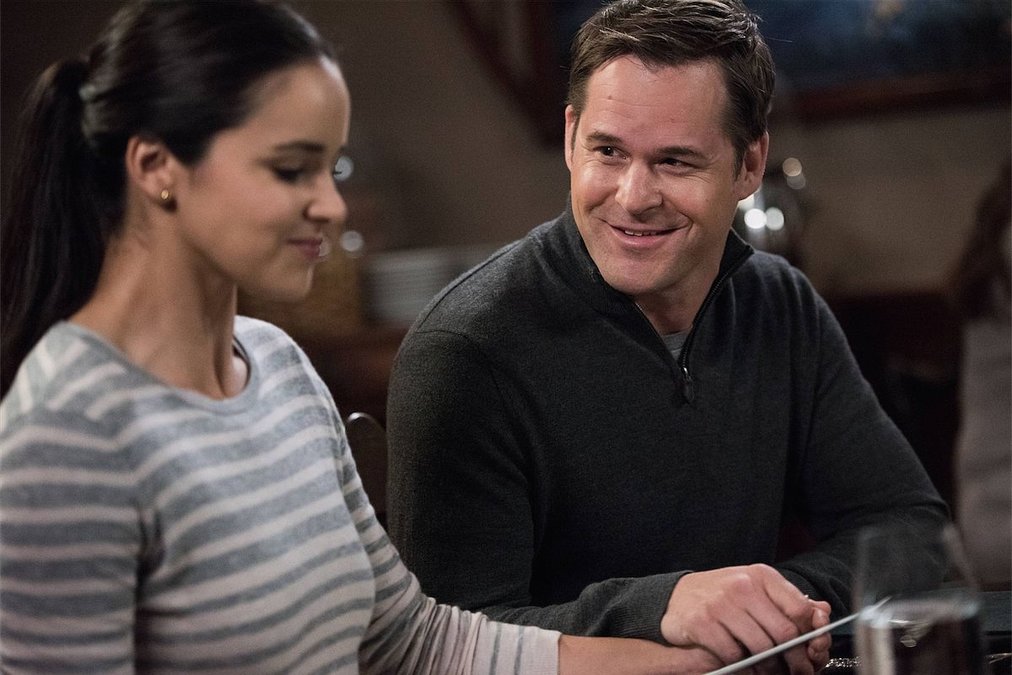 “The Road Trip” is a strange episode of “Brooklyn Nine-Nine” in large part because the main plot isn’t about police work. While this has happened before on the show, the non-police episodes were generally about the ensemble, and many of them were holiday-centric. “The Road Trip” takes Jake (Andy Samberg) and Amy (Melissa Fumero) out of their usual environment and puts them at a bed and breakfast with their significant others. While it’s not quite what I’ve come to expect from “Brooklyn Nine-Nine,” the change of scenery doesn’t make the episode bad — just different.

When Jake and Amy are assigned to prisoner transport, Jake decides to mix work and pleasure by inviting Sophia (Eva Longoria) along, and after Amy talks about how Teddy (Kyle Bornheimer). would never do anything romantic like that, Jake calls Teddy to invite him along too. Since I’d seen promotional pictures for the episode, I already knew about the bed and breakfast double-date of sorts between Jake and Sophia and Amy and Teddy, and I was terrified of how the episode would potentially play up the Jake-and-Amy relationship. But I was pleasantly surprised to find that any possibility of romance between Jake and Amy was largely a footnote. Instead, the focus was much more on Jake and Amy as friends.

See, the catch in Jake’s “brilliant” idea is that Amy was planning on breaking up with Teddy soon, so she definitely doesn’t want him at the romantic bed and breakfast. Once she tells Jake that, he decides to help her hide the impending breakup from Teddy. Now, I’m sure that people who want Jake and Amy to be a couple could see some ulterior motive in that, but Jake is a good guy. He doesn’t need to be in love with Amy to help out, especially since he caused the situation in the first place.

Of course, Teddy doesn’t see it that way, and after Amy cracks and tells him she wants to break up, he brings up the fact that Jake said he liked Amy and that Amy liked Jake back. There were so many ways this could have gone wrong: Amy could have agreed and said it was the only reason she was breaking up with Teddy, Sophia could have broken up with Jake since she didn’t know he used to like Amy and/or Jake and Amy could have had a romantic moment. “Brooklyn Nine-Nine” wisely sidesteps all of these options, leaving Jake and Sophia a couple at the end of the episode while Jake teases Amy in the car about the fact that she used to like him.

I don’t expect Jake and Sophia to last as a couple for much longer — though I wish they would — since Longoria is only a guest star, and based on Amy’s expressions during that car ride, the show definitely wants to play with something more to the “used to like” Jake thing. But I am proud of “The Road Trip” for acknowledging Jake and Amy’s potential romance while keeping it out of the current couplings. It would be a disservice to the characters if Amy had only broken up with Teddy for Jake or if Jake left a good relationship for Amy.

The episode doesn’t entirely leave police work behind in its subplots. The most important of these centers on Rosa (Stephanie Beatriz), Terry (Terry Crews) and Gina (Chelsea Peretti). Because she needs to interrogate a suspect about Gigglepig, Rosa won’t admit to being sick. I liked the continued reference to the drug task force, but we never see the interrogation since Rosa downs a fair amount of non-drowsy cold medicine. She isn’t a character who ever lets loose, so it’s fun to see her loopy from the medicine, a series of events that includes talking in a loud, strangely childlike voice, rolling around the precinct in her chair and even telling Hitchcock he’s the greatest detective she’s ever known. Gina eventually locks her in a room to sleep it off, but even in her sleep, Rosa is funny as she sleep-talks and threatens to rip her grandmother’s head off.

When Rosa wakes up, she breaks the window in the door to get out of the room, which sounds less hilarious on paper than it was in the episode. But in a great twist, she doesn’t need to be upset because Terry finished the interrogation and Gina made a “Rosa’s Gonna Make This Cold Her Bitch” care package. The lesson here is that it’s okay to rely on other people, which is not only a great lesson but one that makes Rosa smile, though she claims it’s because her “immune system is too weak to fight off (her) smile muscles.”

The final plotline gains a lot of mileage from the fact that it pairs up Boyle (Joe Lo Truglio) and Holt (Andre Braugher), something we’ve never seen before. Holt wants Boyle to teach him how to make breakfast for his wedding anniversary, which goes about as well as expected. Boyle tries to get Holt to feel emotions about the food they’re making while Holt would rather do things as efficiently as possible. For instance, he attempts to cook his eggs at the highest heat possible because they’ll cook faster that way. This dissonance in styles leads to the end of the cooking lesson, which upsets Boyle because he was excited to have something in common with the captain besides using the same bank.

But Boyle manages to get through to Holt after all — through his food blog, which Holt initially reads to “scoff,” but ends up teaching him that there should be a story behind food. As a result he makes his husband a croque monsieur — basically, fancy grilled cheese with ham — because they had one in Paris on their first anniversary. In the twist for this plotline, the sandwich is delicious. While Boyle and Holt will probably never cook together again, I like that they were paired together for a plotline. Comedy is created by dissimilar characters butting heads, and while Boyle and Jake are always fun to watch, Boyle and Holt are a surprising and interesting combination.

“The Road Trip” makes good use of its ensemble and plays against expectations in all of its plotlines, which makes it an enjoyable episode. Although it doesn’t focus on police work, the precinct and the detectives’ jobs are still used for plot. If “Brooklyn Nine-Nine” continues into a third season and beyond — and I expect it to get at least a third season — it could be nice to see more of the world beyond the job since “The Road Trip” works so well.