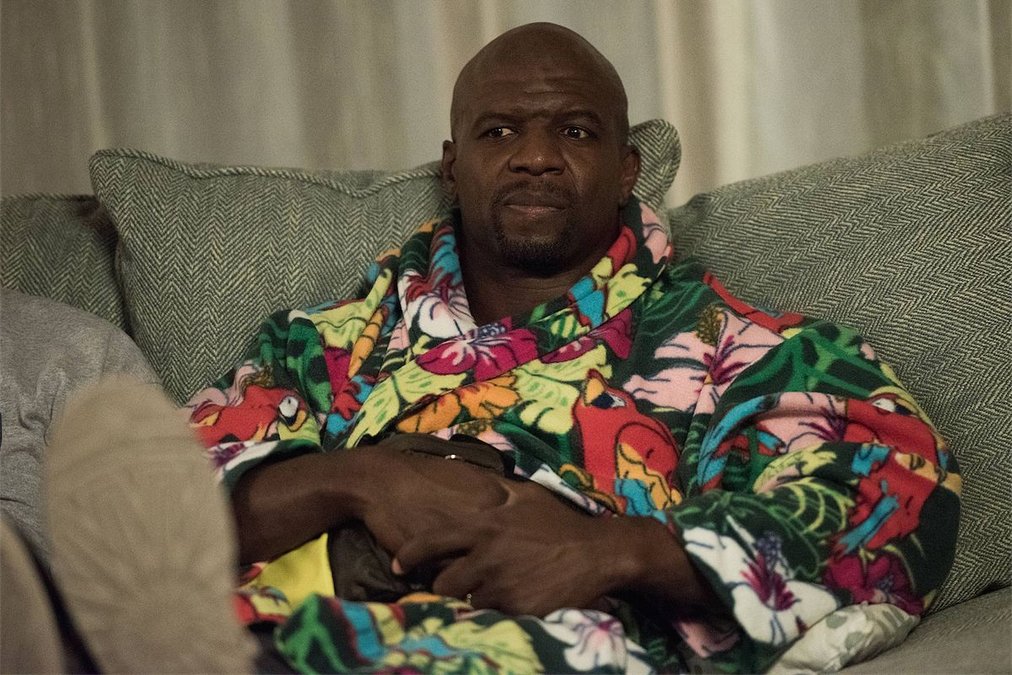 At some point in time, all TV shows feature an episode that takes the characters out of their normal environment — for example, “Mixology Certification” in the second season of “Community” and “Hunting Trip” in the second season of “Parks and Recreation.” “Brooklyn Nine-Nine” has attempted changing up the formula several times this season and in varying ways, but “Beach House” marks the most drastic shift from the way the show typically functions since the characters barely spend time at the precinct or talk about work. But the episode works (as did this season’s “The Road Trip,” the main plot of which took place outside the police world), by relying on the show’s strong character dynamics.

The main plot of the episode focuses on Jake (Andy Samberg) and Holt (Andre Braugher) after Jake invites Holt to the “Detectives Only Getaway” at Boyle’s (Joe Lo Truglio) beach house. No one is particularly upset about Holt being invited because as Jake says at the end of the episode, they all like Holt as a boss, even if Holt’s presence does dim the party atmosphere. He wants to take an 80-minute walk on the beach in winter, he tells a story about mouth cancer when they’re about to enjoy cigars and he asks to turn the bubbles in the hot tub off because he can’t hear anyone. While these things upset the partygoers, they’re the genius of “Beach House.” Seeing the precinct drinking with each other could be a fun episode, but adding the unexpected and awkward element of Holt is what makes the episode funny.

After everyone gets fed up with Holt, Jake comes up with what he thinks is a perfect plan: two different parties. Of course this only works up to a certain point, and since Jake’s plan to keep at least three people with Holt at all times is so complicated, it’s easy to see that eventually everyone will end up at the non-Holt party, including Holt himself. Getting there is still fun when we see scenes of the Holt party interspersed with the non-Holt party that showcase the clear difference between the parties. At the non-Holt party, they’re drinking and playing quarters, and at the Holt party, they’re listening to recorder music while Holt says things like, “It seems to me that all-wheel drive is four-wheel drive” and “I know they say it’s not good to have a TV in the bedroom, which is why I don’t.”

Eventually the inevitable happens: the group stops keeping a close eye on who is on “Holt duty,” and Holt crashes the second party. But when Jake goes to apologize, Holt instead apologizes to him, saying he understands that this getaway isn’t the same with the boss there. It’s a simple and easy lesson, but “Beach House” is such fun to watch that it can be forgiven for not adding much to a well-established trope.

Bolstering any inadequacies in the main plot are the two fantastic subplots, which work well because they focus on unconventional character pairings. When characters are put in plots with characters they don’t normally interact with, it forces the writers to lean on established character traits but often leads to exploration of these traits, letting character nuances shine through. With the amount of character change that has happened over the season and a half of “Brooklyn Nine-Nine,” there’s a lot of nuance for these subplots to delve into.

The better of the two subplots features Amy (Melissa Fumero) and Gina (Chelsea Peretti). At the beginning of the episode, Gina wonders if she’ll meet six-drink Amy and whether they could be friends. Amy takes her up on this sort-of bet, and as she drinks throughout the episode, the anticipation of what six-drink Amy will be like builds. It’s not all anticipation though, as watching Amy get to six drinks is funny by itself. Three-drink Amy dances on the beach in an effort to stay warm while five-drink Amy tries to get Holt to give her a promotion.

When the moment finally comes and we meet six-drink Amy, it’s initially a letdown — for Gina at least — because six-drink Amy is self-pitying Amy. But the plot doesn’t fizzle out, leading to the greatest scene between Amy and Gina to date in the series: Gina taking care of a very drunk Amy. After several episodes of Gina talking about how she doesn’t like Amy and doesn’t want to talk to her, it’s nice to see a new side to that relationship.

The second subplot pairs Boyle and Rosa (Stephanie Beatriz), an unconventional pairing in season two but not in season one. Until I read the AV Club review of “Beach House,” I’d forgotten that Boyle had a crush on Rosa for most of the first season. In light of that, the interaction between Boyle and Rosa, which isn’t awkward or flirty at all and comes across as two friends parleying, is refreshing in a world where crushes on television almost never get swept under the rug. Along with his relationship with Gina, Boyle’s friendship with Rosa highlights how different Boyle of season two is from the man we met last year.

Rosa, too, has changed, and since I’d forgotten about Boyle’s crush, this plot was more about her changes. Rosa is now officially dating Holt’s nephew Marcus (Nick Cannon), but she isn’t sure how to text him. For that, she ends up enlisting Boyle’s help, which is a little weird, but Boyle is a better choice than Jake or even Amy. Boyle might be overzealous in his emotions, but it’s a good counterpoint to Rosa’s struggle with emotion. It’s also nice that Boyle recognizes Rosa’s struggle and genuinely helps her where Jake or Amy would try to make Rosa’s texting about them.

There isn’t a lot of action in the plot, but it ends on a good note: Rosa texts Marcus that she really likes him and doesn’t want to screw up their relationship. The only real downside to this plot is that we’ve spent so little time with Marcus, which means it’s hard to see why Rosa likes him so much, but I expect the show will fix that in a future episode.

Exploring character dynamics is a good space for “Brooklyn Nine-Nine” to be in as it starts the second half of its second season, and “Beach House” provides a particularly good atmosphere for that exploration. Since the main plot doesn’t have a lot of heavy lifting to do, more time can be allocated to the subplots. While not every episode of “Brooklyn Nine-Nine” could work in this way, it’s nice to have an episode every so often to remind us that the writers haven’t lost sight of their characters.