Director Michael Mann’s latest movie has come out, with promises that the former hand behind “Heat” would be able to spice up Hollywood with a new crime thriller (I tried very hard to avoid a pun using the word heat). With such a pedigree, I took my seat in the theater already shaking with excitement over the idea of DeNiro-esque criminals facing off against Pacino-ish detectives who are far too old and grizzled to be carrying on with this kind of work. Never in my life have I been so disappointed to watch a movie starring a bunch of young sexy people instead of a film about a couple of old white dudes (and Val Kilmer).

“Blackhat” is a thriller telling the story of Nick Hathaway (Chris Hemsworth), a hacker who was recently furloughed in an effort to catch a blackhat hacker (a hacker who does bad things with his or her coding powers) who has terrorized the U.S. stock market and blown up a Chinese nuclear reactor. Along with Hathaway are Chen Dawai (Leehom Wang), his former college roommate and a captain in the Chinese military, and Dawai’s sister, Chen Lien (Wei Tang). The film follows the gang as they globetrot from one computer to another, attempting to head the blackhat off at each new turn.

The plot for the film is nothing new in the information age and can be seen in about half the action films to come out of the past decade (see: “Die Hard 4: Live Free or Die Hard”). As the characters travel around the world, many of the film’s developments are broadcast as obviously as a bomb raid siren. Relationships — such as those between Thor and Chen Lien — are developed so obviously that it’s less subtle than a punch to the gut. There also happens to be a subplot with a side character involving 9/11 that not only goes nowhere, but only seems to exist to make the bald eagle inside of all of us shed a red, white and blue tear.

Acting in the film is a somewhat mixed bag. Hemsworth as super-hacker Hathaway is ruefully miscast and looks as though he got used to coding with his gigantic pecs while using both arms to curl with free-weights. Additionally, the accent that Hemsworth affects tends to be all over the place, sometimes seeming heavily (though somehow nondescript) New Yorkish, while at other times seeming Californian. All of the Chinese characters in the film — with the strong exception of Chen Lien — seem to have gone to the world’s greatest teacher for English. While I’m always willing to suspend my disbelief, it is genuinely impossible for me to believe that everyone in China who needs to speak English does so with no accent whatsoever. Aside from these instances, Wang and Tang both manage to support the film rather well, although not enough to distract from Hemsworth’s hairless chest.

Cinematography in the film is distracting to say the least. Director of Photography Stuart Dryburgh seems convinced that tension in a film can remain elevated as long as the camera never sits still. While during scenes of intense action the shaky-cam is less than unexpected in the modern film industry, two characters looking at each other is made so intense by the camera that I kept waiting for somebody’s head to explode.

Sound mixing in the film was likewise just as awkward. Several scenes in the film appear to be suffering from the dreaded Godzilla-itis, in which an actor’s voice and mouth fail to make the same words at the same time. I can’t be sure whether it was the film or the particular screening I attended, but I review the movie I was given, not the one I think it might be. Dubbed lines are repeatedly eschewed from their visual representation, keeping the audience in suspense as to when the giant monsters would begin to show up.

The one thing this movie does exceptionally well is the visualized concept of hacking. While other films and media would have audiences believe that hacking is like a video game with an exciting graphical interface and tons of sounds like, “pew pew!”, “Blackhat” manages to realize the actual command line-based interface that actual hackers would use. While this may not increase the excitement factor, it at the very least made me smile (but a close-mouthed smile).

While this movie isn’t the groundbreaking thriller that “Heat” was, or even a spectacular view at Hemsworth’s nude body that I hoped it might become (this movie has just increased my capacity to write fanfiction about Thor hacking Iron Man’s suit to do “things”), it at the very least kept me entertained while watching. Most audiences would be better served watching “Heat” if they haven’t seen it before. Otherwise it’s only really good for a quick popcorn flick if you have the cash to spare. 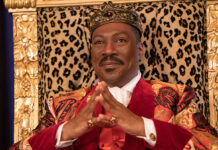