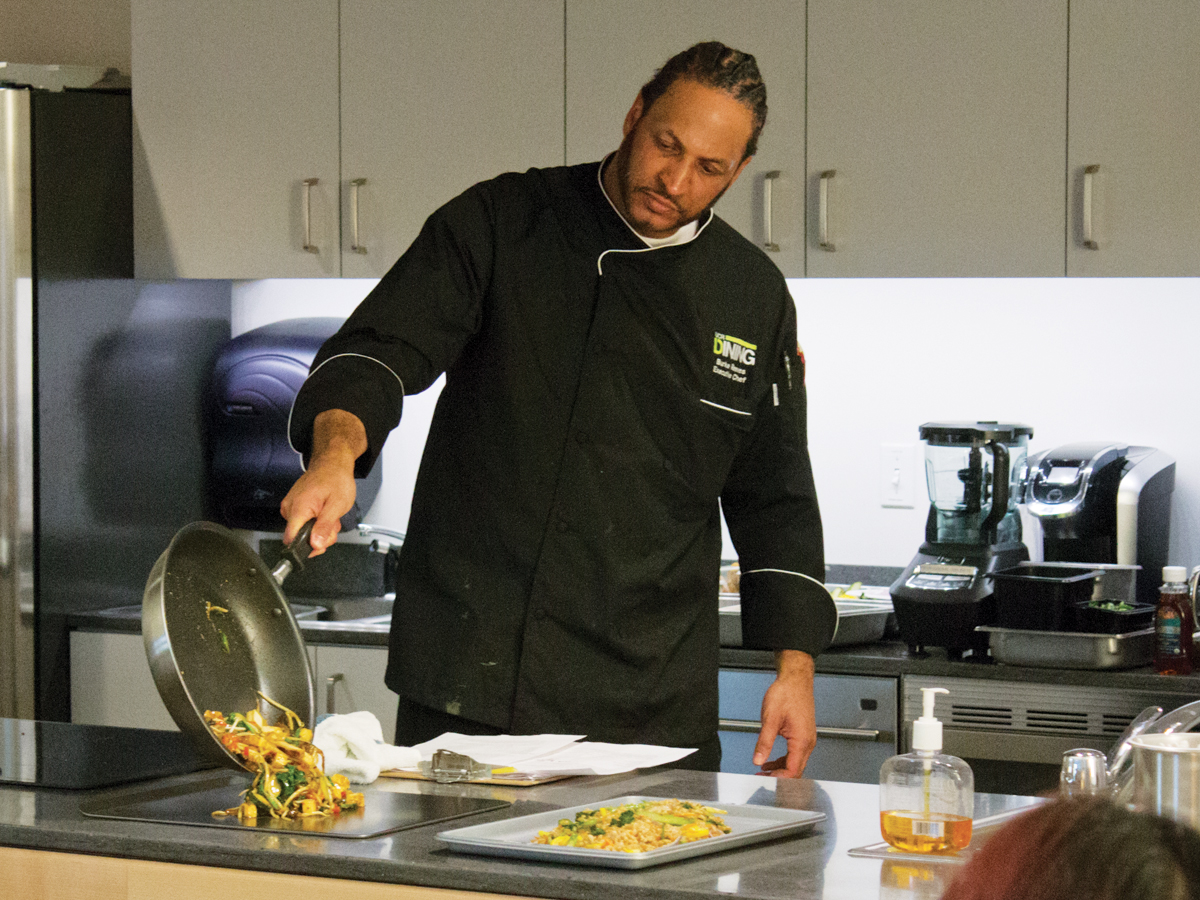 I stood outside the doorway of what appeared to be a nondescript classroom in the late afternoon sun of Wednesday, Jan. 22. Situated in a far-off corner of the new Student Recreation Center, I waited with a handful of other students for the doors to open at 4 p.m. and the cooking demo to begin. More motivated by the promise of food than by the promise of learning, I was finally allowed to enter the small classroom illuminated by the bright rays of the setting sun. I figured that based on the location, the cooking demonstration that was promised on the SRC events page would be more theoretical and less hands-on. However, the classroom had a fully furnished kitchen, and I was delighted to learn that the demonstration would be much more interactive than I had anticipated.

We were greeted by two students in UCR Well T-shirts who scanned our IDs and gave us each a pamphlet with the chef’s name and an outline of the recipes we would be learning. Behind the counter that separated the kitchen area from the tables and chair around the room, Chef Burke Reeves was busily arranging ingredients in small paper bowls next to the stove. He was an imposing man several inches taller than me, and had a black chef’s coat and a long ponytail. However, he was extremely bright and energetic in the few moments I had to speak with him before he began his presentation. He explained that his goal was to teach healthy recipes to students who had begun subsisting entirely on packaged, pre-processed foods in their time away from home.

The discussion began with Reeves introducing himself as the executive chef for the retail aspect of UCR Dining Services, meaning that he oversees many of the HUB restaurants, such as Habanero’s and La Fiamma, as well as The Barn and Latitude 55. Taking his place behind the counter, he introduced the first dish he would be making, the “Vegetarian Farro Saute,” which included farro, a type of high-protein grain and several vegetables. The presentation began at a breakneck pace, with Reeves listing the ingredients as he sauteed the veggies and fielded questions from the audience. While I don’t consider myself a poor cook, I learned a few valuable tips during his presentation. Reeves explained the need to mix olive oil with other oils, such as canola or vegetable oils, for cooking to improve quality. Also, grains can be improved by cooking them in vegetable broth instead of water for an enhanced flavor. His most important tip, however, was the need to taste at several points throughout the preparation to ensure that all the flavors were blending well.

The room was soon filled with the aroma of garlic, onion and freshly cooked vegetables as Reeves moved onto his next dish — a tofu and chicken stir-fry. More students began to trickle in as he began the next entree, many of them hungrily eyeing the tray of fresh farro that had just been completed. Glancing at the clock on the wall, I saw that it was already half-past the hour and hoped that everything would be done before the class was over. Reeves didn’t seem worried however, and kept working at his cool pace, occasionally tossing the ingredients around the saute pan with a flourish, and stopping to add a few dashes of salt and spices after a quick taste. The list of ingredients was immense, and I had to consult the pamphlet every few minutes to follow along. With only 10 minutes left to spare, Reeves placed the stir-fry on a platter next to the tray of still-steaming farro.

Sensing the impending end of the class, Reeves gestured for some of the student volunteers to begin plating the already prepared dishes while he moved onto the salad course. He worked like a machine, adding melons, avocado and white vinegar into the blender to create the vinaigrette while simultaneously suggesting that the best greens to use are spinach leaves and kale for the grape, pomegranate and asparagus salad he was preparing. When I was handed my plate, I was taken in by the sights and smells of the stir-fry and farro saute. While I normally have an aversion to mushrooms and tofu, I was really impressed by the stir fry and its wonderful taste and presentation. By now, the clock had come around to 5 p.m., and we were hustled out the door as the volunteers handed us our salads while the next group of students entered. I scarcely had a moment to thank Reeves and compliment him on being the only person in my life who had made tofu taste edible before I was back in the gym, eating my salad while cautiously walking among the weight benches.

While certainly informative and undeniably delicious, there are many aspects of the cooking class that I won’t be able to apply in my day-to-day life. Much of the produce and pre-packaged spices used in Reeves’ presentation are undeniably expensive, and my shoestring budget oftentimes prevents me from buying all the produce necessary to make a vegetarian stir-fry or salad. He recommended buying carrots, asparagus, potatoes and rice that can be bought in bulk and kept for much longer than leafy vegetables, and that uncooked grains and rice can be prepared and frozen for later use to extend their life. As a fan of cooking, however, I plan on making some of the dishes we learned when I have adequate funds.