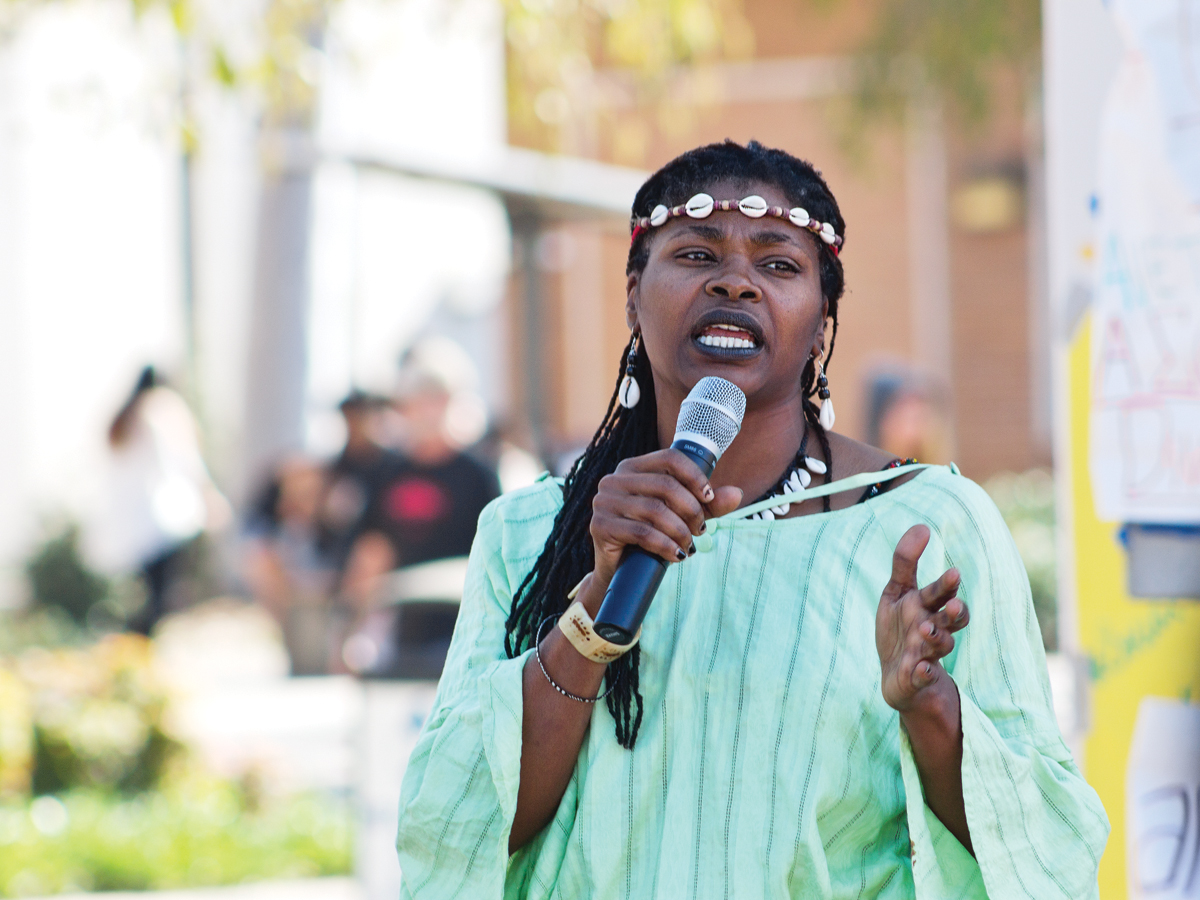 Riverside’s winter weather proved to be not so wintry once again as a much-too-warm 80 degrees persisted on Wednesday afternoon. Highlanders dashed off to their classes and away from the blazing sun, passing the Bell Tower from every direction, yet not many gave a second glance to the Nooner many had grown familiar with. However this was the annual Black History Month Nooner, hosted by African Student Programs. Clubs and organizations like the National Society of Black Engineers, Black Student Union and Nigerian Student Association gathered with vibrant booths displaying pamphlets on their tasks and goals, while celebrating African-American culture.

Soon enough, Riverside’s diverse students quickly crowded into the soothing shade of the Bell Tower once they heard the soulful sounds of the first performer on stage. After shout-outs were made to all the African-American associations, a first-year student graced the heat-weary audience with her powerfully melodic voice as she belted out the classic tune of “A Change Is Gonna Come” by Sam Cooke. Her strong voice stayed true to Cooke’s hopeful tone and vision for the African-American community’s success.

After appreciating the time-honored song, five members of Alpha Phi Alpha, Pi Epsilon Chapter proudly marched up to the stage to represent African-American culture within their fraternity. They stomped in recognition of their brotherhood as they announced their motto: service for all and their love for all mankind. The members also declared their goal to develop leaders with academic excellence and provide service to the community before commemorating a momentous African American history. They listed a few well-respected civil rights heroes as “the men that we represent, the men that we’ll become: Martin Luther King Jr., W.E.B. Du Bois and Thurgood Marshall.” Before leaving us with an unforgettable ceremony and honoring African Americans’ past, they shouted, “Alpha history is black history.”

“This is our month, right?” a professor of West African dance, Makeda Parker, enthusiastically called to the crowd. Excitement and energy passed from one student to the next as she proceeded to the stage. She brought appreciation of African-American culture and history to every student, regardless of race, as she preached that Black History Month is a collection of “what we learned in 365 days, brought together in one perspective in a month.” Highlanders had the privilege of hearing Parker recite her original poem, “Manifestation of Self,” in which she declared that though she had never touched a grain of African soil, her “soul sprang from within.” She left the audience with her last demonstration of African pride through her performance of the ritual dance, Kakilambe.

Highlander enthusiasm rose to an all-time high as soon as four girls from the Caribbean Student Union pranced onto the stage in their spirited costumes adorned with bright red, blue, green and black tutus that paired with their gold-embellished bras. They put on a festively entertaining dance to express their pride and celebrate their roots. Finally, another UCR student rose to the stage to share her speech titled “America” to close off this year’s annual event. She used her strong voice to raise awareness about the lasting existence of African-American discrimination, stating that groups like the Ku Klux Klan never vanished, but instead evolved into authority figures with badges. She was clearly not afraid to share her bold opinion on racism in today’s society as she exclaimed that “systematic oppression has been concealed” in America. Thus, she brought forth the lasting question in our minds: How will we react now that white privilege in America has been revealed?

Students pondered upon all the performances featured by the African-American student organizations as they scattered off to their next classes. This special Nooner kicking off Black History Month raised the spirits of African-American Highlanders in the celebration of self, while it taught others the value of cultural awareness.