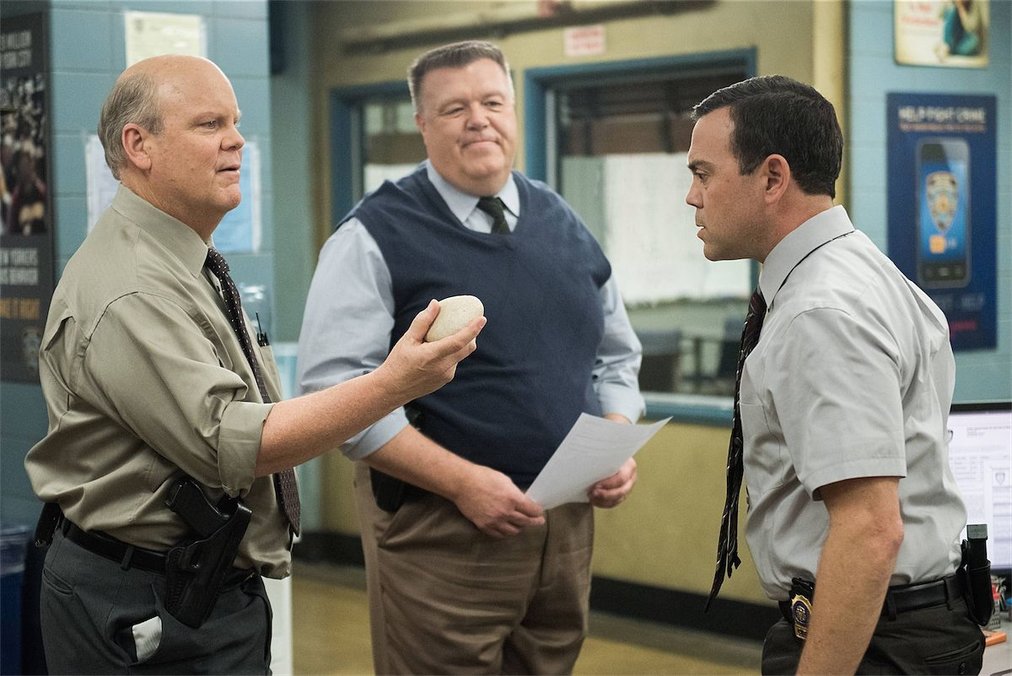 As much as “Brooklyn Nine-Nine” emphasizes the fact that its characters are police officers, the show doesn’t often get into the fact that police work can be a dark and dangerous business. Only a handful of episodes deal with murders, and even more rarely do we get a look at the victims. This is not a downfall on the part of the show because those things don’t lend themselves to comedy nor do we want to laugh at them. What it does mean for an episode like “Sabotage” is that tropes from traditional cop shows, like the one where a criminal decides to take revenge on a detective, simply won’t play well in the world of this show.

The set-up of the main plot lays out a typical episode of “Brooklyn Nine-Nine”: Jake (Andy Samberg) has a problem — in this case, he keeps showing up for work late — and we expect he’ll work on solving it over the course of the episode. Within its first two minutes, “Sabotage” neatly abolishes the idea that this episode will be typical when Jake learns he failed his drug test. Since the characters and the audience know Jake doesn’t use drugs, the episode doesn’t spend time trying to convince us of that fact but instead quickly moves on to Jake’s theory that he’s been sabotaged. He claims that’s why he was late to work several days in a row and also why he failed the drug test, and we believe him.

From there, the major question of “Sabotage” is who set Jake up, and I was excited when the show put Rosa (Stephanie Beatriz) and Amy (Melissa Fumero) on the case because Jake was suspended for the time being. Unfortunately, they’re left sorting through the files of dozens of people who might want to sabotage Jake and don’t get to do much, particularly when the episode follows Jake after he gets himself kidnapped.

With Jake’s kidnapping, the episode falls apart. Ultimately, it could be argued that “Sabotage” suffers from a lack of focus on Jake, which is a phrase I never thought I’d say about “Brooklyn Nine-Nine.” By trying to make the episode look like a typical episode and shoehorning Rosa and Amy into the plot, there just isn’t enough time spent on Jake’s kidnapping to give it the least bit of tension. Nor is any attempt made to make the kidnapper, Sophia’s former boss (Chris Parnell), last seen in “Defense Rests,” competent. The episode seems to think Jake should be worried anyway — and I’ll admit that it should be worrying when a desperate drugged-up man says he’s going to kill you — but there was never any doubt that “Brooklyn Nine-Nine” would follow through on killing its main character. The kidnapping plotline is reduced to either how funny you think Parnell is or how much you care about his character, which isn’t much considering he was a one-off, barely noticeable guest star in an episode that didn’t focus on him.

It’s nice to see Rosa and Amy get the takedown, and it also indicates that everything that happened before the kidnapping was important: The two realize something is wrong with Jake because he wasn’t around to annoy them about their progress on the case. But the scene after his rescue falls flat emotionally due to the kidnapping’s lack of danger and tension. There was never any worry that Jake wouldn’t get out of the situation one way or another, and our lack of worry combined with Jake’s makes for a confusing confession from Jake about the fact that he has trouble believing people have his back. If “Sabotage” had taken the time to flesh out the kidnapper and his plans, it would have made for a stronger episode.

The two weak subplots didn’t help the episode’s chances much. These plots had to be simple to give more time to Jake and his kidnapper, so they largely rely on verbal humor. The first subplot pits Holt (Andre Braugher) and Terry (Terry Crews) against Gina (Chelsea Peretti) when the former two forget to attend the latter’s dance performance. While Terry is content to lie, Holt cannot, and when he calls Gina’s dancing a hobby, she mopes around the office and claims she’ll stop. It’s not clear if Gina actually would give up her dancing or if all she wants is a reaction from Holt, but it’s sweet that Holt’s apology involves changing Gina’s dancing from a hobby to a profession when he pays her to perform at the at-risk youth program. In the second subplot, it’s nice to finally see Scully (Joel McKinnon Miller) and Hitchcock (Dirk Blocker) given a chance to do something, but it wasn’t surprising when it turned out they were competent enough detectives to solve cases but just didn’t want anyone to know. With the tight ship that Holt runs and how generally competent the other characters are, it only makes sense that Scully and Hitchcock would turn out to be competent too.

Considering “Brooklyn Nine-Nine” typically has a hard time taking the spotlight off of Jake, I hate to suggest that the episode’s problems would have been solved by less involvement from the rest of the ensemble, but if the show wants “Sabotage” to be a convincing, or at least interesting, episode, it needs to spend more time on everything Jake was dealing with. Since this isn’t a show that we want to see deal with heavy things like kidnapping, it makes sense that this incident wouldn’t strongly affect Jake, but that leaves the kidnapping plotline with no emotional stakes. Without those stakes for Jake and that plot, the episode grinds to a halt and stops being entertaining.