I know almost nothing about professional wrestling.

When I was on my junior high’s annual eighth-grade graduation trip to Washington, D.C., I had to beg to watch the Ducks win the Stanley Cup on TV in between my roommates wanting to watch WWE. To be honest it could have been another wrestling league. I didn’t know and didn’t care. My heroes were the ones who actually played a real sport — in those days, even though I wasn’t a huge hockey fan, I preferred the Teemu Selannes of the world to whoever was doing ridiculous stunts in the ring. Better yet, give me Angel players: Vladimir Guerrero, Mike Napoli or Scot Shields — Darin Erstad was my favorite as he crashed into walls and gave his all. Why would I want something fake when I had the real thing?

Though I didn’t understand it then, the men and women of the ring were just as real to my roommates and others and the other sports stars were to me. Whether they knew that every twist and slam of their heroes’ bodies was mostly choreographed did not matter: This was entertainment and storytelling, and a bombastic and fantastical form of it at that. And though their moves may have been scripted, the damage done to the bodies of these people were real — you can’t fake getting your head pummelled into the ground.

John Darnielle, whose songwriting vehicle, the Mountain Goats, is an institution at this point, knows full well the realness behind the masks of professional wrestling. His abusive stepfather, who has been well-documented in interviews and Mountain Goats’ songs, used to take him to wrestling events at arenas as a kid, and had some bonding with the young Darnielle. The slamming bodies and triumph of justice were important to him, and allowed him to vicariously excise childhood frustrations and joys, just as the Angel teams of the mid- to late 2000s did for me.

It is in this spirit that the Mountain Goats’ 15th album, “Beat the Champ,” resides. Darnielle relives his childhood and pays homage to his heroes — those who put their bodies on the line for the sake of the crowd — through the 13 songs on this record. Most importantly, however, Darnielle takes them, their lives and their livelihood seriously when nobody else did, and finds all the triumph, joy and sadness of the human experience you might come to expect in a “normal” life.

Album opener “Southwestern Territory” begins the story with nostalgic tones, as Darnielle inhabits a wrestler reminiscing on his career. Over elegiac piano and fluttery winds, he remembers his highs and his lows: The mundane task of driving home (“no one drives on the 60 this late”; the Mountain Goats started in Claremont), the adrenaline of making the cheap seats go wild and trying to remember to write in the diary his son gave him. He cannot remember life before wrestling — it has been his life’s work and passion — for better or for worse.

Lead single “The Legend of Chavo Guerrero” dives headfirst into obsession with a childhood hero, and beneath its poppy guitars and upbeat feel, there is an underlying nostalgia and bittersweet feeling present. Though Darnielle is singing from the vantage point of his childhood, his adult perceptions about reality seep through. This was a time in your life when watching your heroes sacrifice their bodies in the name of justice or winning could solve some of your problems, if only temporarily. Darnielle paints a picture of himself late at night lying on the floor in front of a tiny black-and-white TV, before singing with all the sincerity in the world, “the telecast’s in Spanish, I can understand some / And I need justice in my life, here it comes.”

“Choked Out,” and “Heel Turn 2,” serve as two sides of the same coin. The first is a manic folk-punk number with Darnielle’s character exclaiming, “Everybody’s got their limits / nobody’s found mine,” while the second, which directly follows it on the album, is an introspective, slower examination of why a wrestler would become villainous. “You found my breaking point / Congratulations,” Darnielle sings with a quiver of near-defeat in his voice. Like the rest of the album, the song takes its cues from wrestling while really examining what a person would do to provide for themselves and keep some exhilaration in their life at the same time, all while trying to not to break down under heavy stress. A beautiful, reflective piano outro allows everyone a little space to figure themselves and everything around them out.

More self-reflexiveness is found in “Unmasked!” and “Hair Match,” as Darnielle examines what it means to be a lesser-known wrestler, just trying to get by — and hoping that you’re inspiring someone, if only yourself. “Luna,” “Stabbed to Death Outside San Juan” and “The Ballad of Bull Ramos,” are poignant tales of real life wrestlers from Darnielle’s youth battling their demons. I would be remiss also to not mention the rest of the Mountain Goats on this album: Peter Hughes and Jon Wurster, along with Darnielle, help set the backdrop to his lyrics in a variety of styles, from jazz to punk.

“Before a mirror late at night / I will reveal you / I will reveal you,” goes the last line of “Unmasked!” No matter the over-the-top stunts and grandiose story lines, the wrestlers of the largest and smallest arenas are people just like you and me. They put their bodies on the line for the sake of entertainment, but have a life beyond the ring. So do the people in the stands. For a couple of hours, the ring is all that matters, but when everyone goes home, life hits them in variety of ways. Through the heroes and villains, Darnielle finds beauty in life via wrestling. “I loved you before I even knew what love was like,” he sings in a particularly transcendent moment in “Hair Match.” It’s the story of a child learning life lessons through his heroes — whether that be Darin Erstad or Chavo Guerrero — and what that means to him. 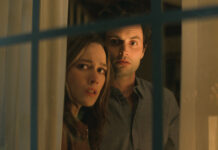 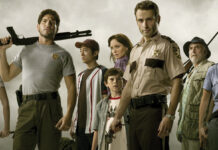 Radar Replay: The first two seasons of AMC’s ‘The Walking Dead’ are a perfect binge-watch for Halloween

Netflix’s ‘You’ captivates audiences in its return for its third season...