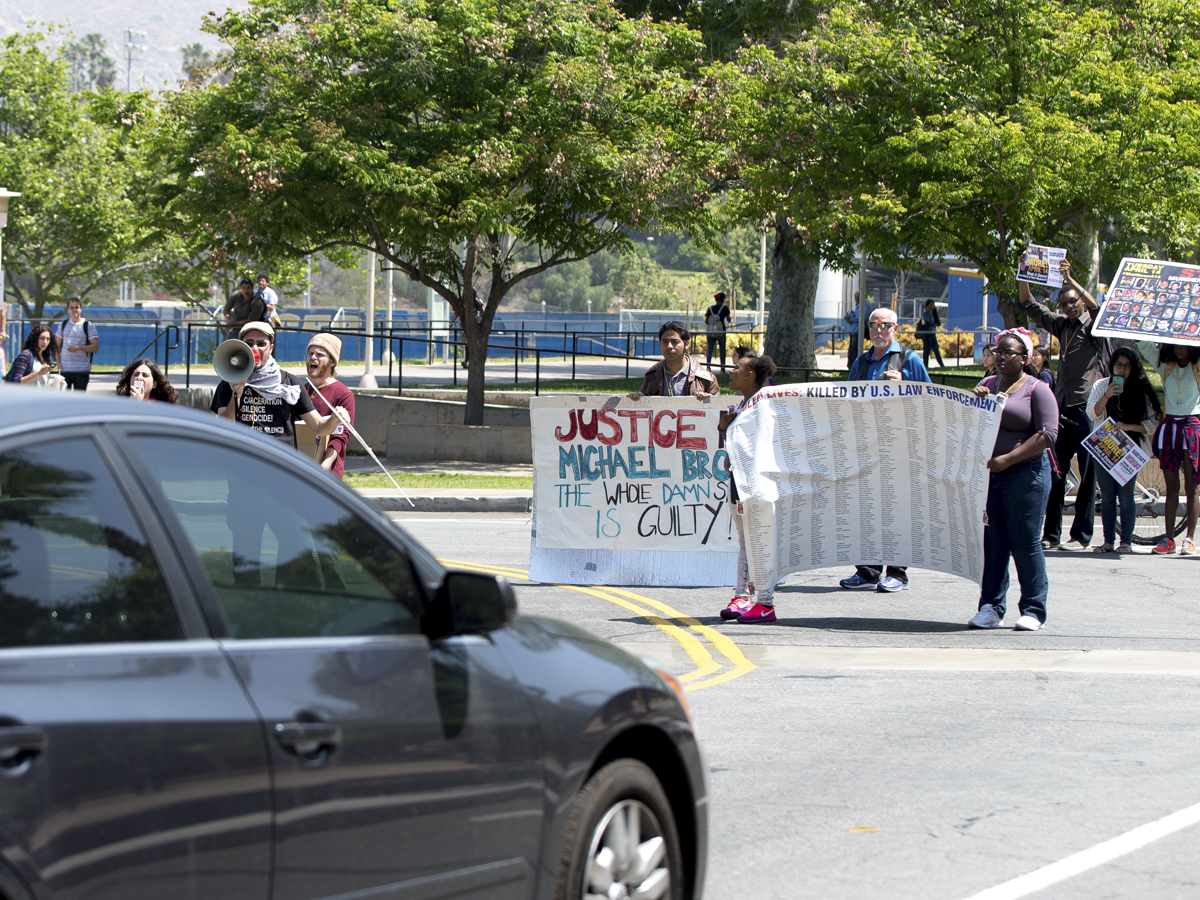 Between 15 and 20 students showed up at the Bell Tower to protest police killings and mass incarceration of minority youths on April 14 as part of the Stop Mass Incarceration Network’s “ShutDownA14” event, which occurred nationwide.

The action was meant to be a “shutdown,” where people walk out of their daily activities like school and work to “force more students to confront the full scope of police murder at this moment in the USA,” according to sociology PhD student Alessandro Morosin, who, along with political science PhD student Stephanie Attar, organized UCR’s protest. Fourth-year undergraduate Sarah Doyle and second-year undergraduate Ariel Mendoza also helped organize the event.

Attar said they were expecting a minimum of 50 students at Tuesday’s event, which had been in the works since February.

“The turnout on campus was extremely disappointing,” Attar said, citing the “thousands of people” that were reached out to via class announcements, posters, a KUCR radio interview, emails to professors, making announcements at the HUB and more. “This says a lot about the climate on campus,” Morosin agreed.

Marching through campus toting banners with the names of individuals killed by police and chanting, “There’s a Mike Brown in every town, today’s the day we shut it down!” the group made their way through Watkins Hall and urged students to walk out of their classes. The group then held a “die-in” outside the HUB in which protesters laid motionless on the ground for four minutes in memory of the four hours Michael Brown’s body was left in the street.

Ama Serwaa, a third-year political science major who participated in the protest, said that it’s important for students to stand up to racism. “I came out in support for a good cause, for justice against mass incarceration … because the whole damn system is guilty,” she said.

The protest then moved to the intersection of Canyon Crest Drive and University Avenue, where participants blocked traffic, also for four minutes.

Morosin and Attar said that the group was later joined by “easily 50” community members when they marched to downtown Riverside and chanted at a city council meeting, the police station and the courthouse.

“I’ve been aware of what’s been going on. It definitely would have impacted me,” he said. “It would have definitely been something I would have been a part of, just to voice my opinion

Despite the low turnout from students, organizers believe the action had some effect. “I do feel like our action was successful in the sense that we saw people come out who really do care about social justice,” Attar said. Morosin held similar sentiments, saying that the participants helped support “surrounding communities who bear the brunt of police brutality.”

As for the future of the movement, Morosin said that they will continue to join Los Angeles protests, but Attar is unsure of whether there will be any more events at UCR, citing what she views as student apathy.

“I don’t know if I can continue to organize at UCR,” she said.