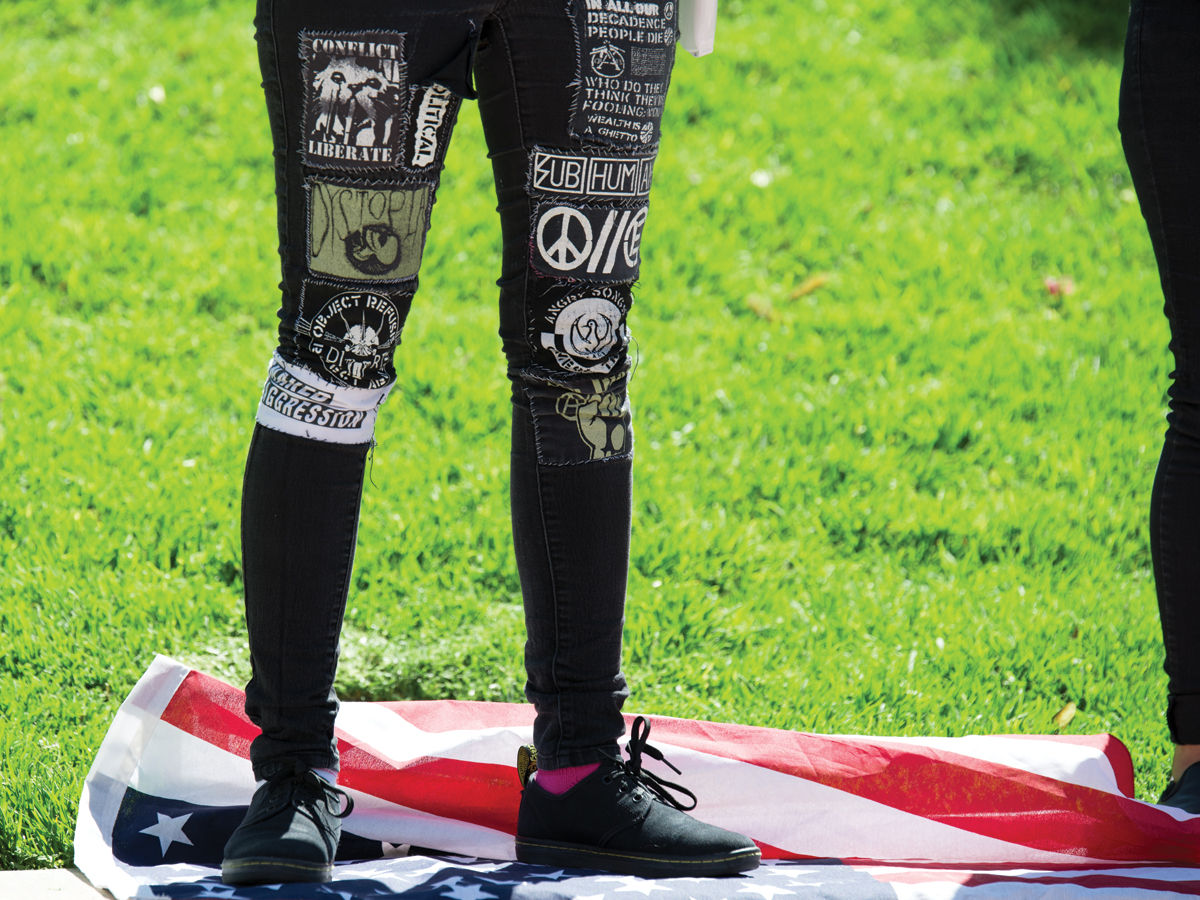 Emotions are running high around campus after a student protested police killings of minority youth last Thursday by stepping on an American flag. One protester, a political science graduate student who helped organize the demonstration, was injured when another student ripped the flag from under her, causing her to fall to the ground. The incident has elicited responses from several groups, such as student veterans, many of whom believe that the protester’s actions were offensive and inappropriate, and others who support the actions as freedom of expression.

Both the protester and the student who removed the flag declined to be named over concerns for personal safety.

The protest, consisting of about five students, took place in front of the HUB at around 10:30 a.m., and the incident occurred approximately 30 minutes in. UCPD Chief of Police Mike Lane responded immediately, as he was already present to monitor the protest.

The student who ripped the flag from under the protester explained the reasoning behind his actions later in an interview with the Highlander.

“As a combat veteran, I have presented that flag to widows, parents and friends as a symbol of their loved one’s ultimate sacrifice. It isn’t just fabric and I wanted it off the ground. That’s it,” he said. “I never intended for her to fall,” he continued. “I was only thinking about picking up the flag.”

The protester said she was directed by the campus student health center to see a chiropractor due to injuries she sustained during the fall and is filing a misconduct report with student affairs, but has not decided if she will press charges.

She later admitted that stepping on the flag as a method of protest was not her first choice. She explained that she had tried many tactics to encourage students to join protests against police brutality, but had been met with indifference. She helped organize a demonstration two weeks ago, but few students participated.

“Months of the call to action being met by student apathy taught me that our tactic needed to change in order to more accurately convey the flagrant injustice being committed against US citizens,” she said. She and her fellow protesters initially planned to burn the flag, but decided against it due to fears of being brought up on charges for starting a fire on campus.

The student who took the flag, however, along with third-year business administration major and student veteran Maria Maciel, believe that stepping on the flag was not only offensive, but obscured the message the protesters were trying to send.

“When you offend more people than those who are there to support you, you should probably take a step back and rethink your strategy,” said Maciel. “I’m just curious about what this group is actually doing to change the system.”

Kelly Peters, a third-year political science major, both defends protesters’ right to step on the flag, and supports the protester in her decision to do so.

“Freedom, equality … these things are what our armed forces fight to maintain,” she said.  “But what’s going on right now around the country, where individuals are being killed by police just because their skin is black, that’s the opposite of what our flag stands for … the most American thing you can do is protest the injustices in this country.”

Maciel emphasized that she and her fellow veterans are not opposed to the group’s cause.  “We are not against this group’s right to protest or what they were protesting, we are against our flag being desecrated,” she said. A group of veterans, including Maciel and the student who took the flag from the protester, held a “silent counter protest” right after the initial demonstration, during which they covered the lawn in front of the HUB with small American flags.

Since the demonstration, many threatening posts directed at the protester have appeared on social media, such as threats to “curb stomp” her, or “kick her ass.” “I would’ve done more than assault her,” read one Facebook comment. Although the protester did not expect to receive so many threats of violence, she hopes that her controversial actions have started a dialogue about police brutality.

“At the end of the day, focusing on the specifics of what I personally said or did during the protest pales in comparison to where one’s anger and attention really should be, which is how the system marginalizes and oppresses millions of our people on a daily basis,” she said.