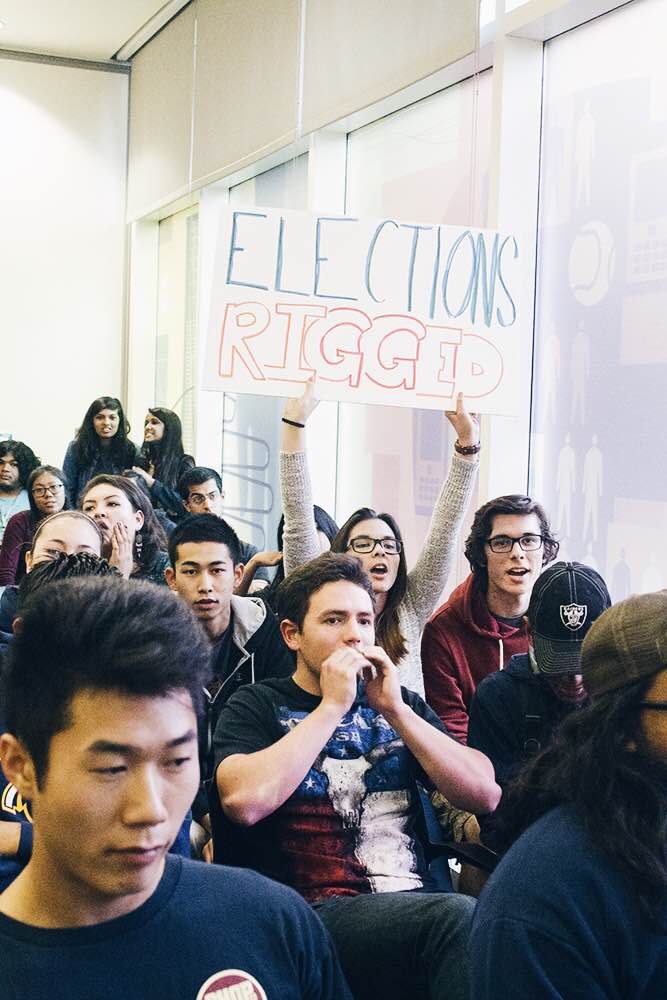 This week’s more than six-hour-long ASUCR senate meeting was rife with controversy as spectators overflowing from the room expressed both support for and opposition to recent actions taken by ASUCR, including the disqualification of all [OUR]Voice candidates from the election and the censure of ASUCR President Nafi Karim and Executive Vice President Michael Ervin.

Due to the high volume of people expected to attend, the meeting was moved from the Senate Chambers to the Tartan and Tweed room in the Student Services Building.

Over 100 students were in attendance, with many chanting, “Where is the truth, the senate needs the boot!” and “Not your selection, this is our election!” causing disruption only 10 minutes into the meeting and halting its progress.  Ervin deemed the meeting out of order and called for adjournment; however, the senate disagreed and went into recess, as suggested by Vice Chancellor of Student Affairs Jim Sandoval.

Parliamentarian Mohamed Hussein, Karim and Ervin did not rejoin the session when ASUCR reconvened roughly an hour later, as they believed the newly reconvened session was being held unconstitutionally.

Public comment recommenced, with members of the galley bringing forth concerns both for and against [OUR]Voice’s disqualification, which was issued the previous day.

“Where is the concrete, 100 percent fact that you’ve seen us laptop? … We all deny that video … we need the facts to confirm everything, and that’s what I’m asking for,” said [OUR]Voice candidate Kevin Chau, referring to a video that allegedly shows [OUR]Voice volunteers laptopping — carrying a mobile device and persuading students to vote for candidates on that device — in a residence hall.

Members of [OUR]Voice have stated that the video is illegitimate as evidence because the faces of the laptoppers are not visible. Others contend that the video proves the party violated two sections of the elections code, which bans laptopping as well as campaigning in residence halls.

Vice President of External Affairs Abraham Galvan responded to Chau’s allegations. “We don’t need 100 percent proof to know that something is going on and to address an issue. There’s levels of evidence that are required for different things and when the committee that is specifically tasked to review those cases finds that there is enough evidence … that’s when decisions are made,” he said.

“I know the party behind me who are shouting don’t have the collective student interests at heart,” Pham said.

Elections Director Stephanie Rose also responded to allegations that violations were handled unfairly, citing her responsibility to follow the elections code. “I don’t think previous elections directors have set the precedent that if rules are broken, people will be disqualified,” she said.

Following public forum, ASUCR moved into a closed session to vote on whether to censure Karim and Ervin. Approximately 10 members of the galley occupied the elevator to prevent the closed session from taking place, and UCPD was called when the students did not comply with Sandoval’s requests for them to leave, after which the students left the elevator. No action by UCPD was taken.

“You’ve really shown why you’re elected in your office. This is great and you’ve really brought integrity back to the office,” said second-year political science major Eddie Franco about the decision to censure the two.

[OUR]Voice candidates may appeal their disqualification by submitting appeals by 5 p.m. on Thursday, May 7.