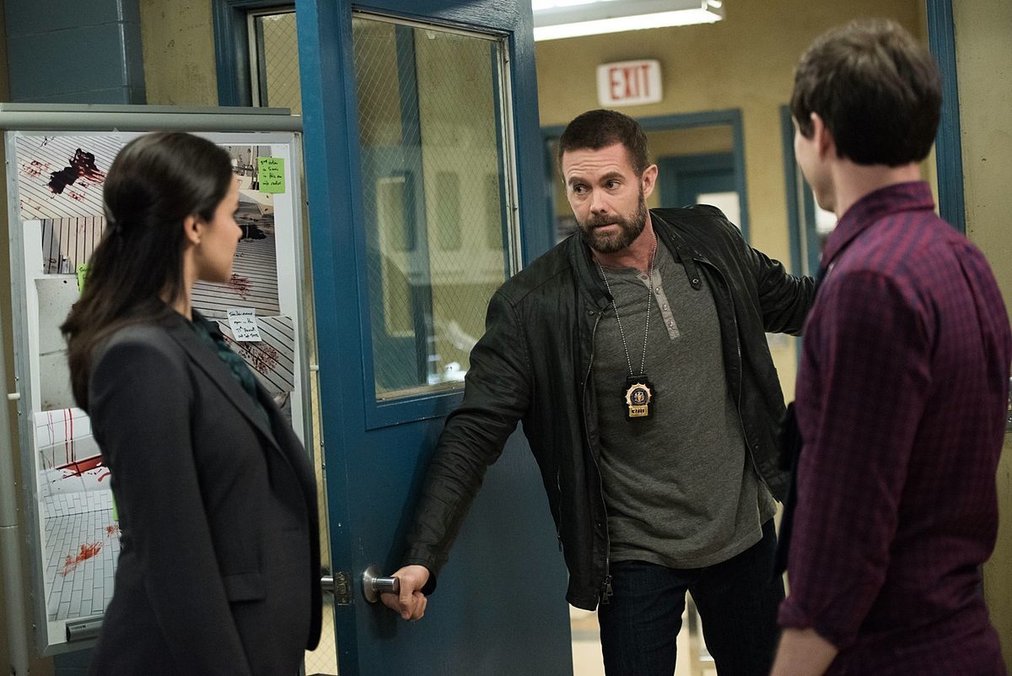 When I write these “Brooklyn Nine-Nine” reviews, I try to be as objective as possible. For some episodes, like this week’s “Det. Dave Majors,” that’s really hard. I’m going to be honest and say that once it was clear the episode was dragging out the Jake (Andy Samberg) and Amy (Melissa Fumero) romance plot, I stopped paying as much attention as I should have. I’m not interested in any kind of romantic relationship between Jake and Amy, but in spite of this fact, I have enjoyed several episodes this season that hinted at that possibility, including “The Road Trip” and “Boyle-Linetti Wedding.” So, the romance angle was clearly not the only thing I objected to, but it didn’t do the episode any favors.

“Det. Dave Majors” opens with Captain Holt (Andre Braugher) announcing that one of the detectives will be working a joint investigation with the titular detective (Garret Dillahunt), and Amy and Jake are equally excited because he’s the best detective in the NYPD. To keep the peace, Holt assigns them both to the case. Watching Jake and Amy try to impress Majors through ridiculous means, including cool notebook flips, sunglasses positions and one-liners that would be at home on “CSI: Miami,” is actually really funny, but it quickly becomes clear that this isn’t an episode about impressing Majors.

Majors invites Jake out to a bar, and while Jake is initially excited, his delight turns to horror when he realizes Majors only invited Jake in order to ask if he was dating Amy. When Jake tells him they’re just friends, Majors announces his intention to ask her out when the case ends, and it obviously upsets Jake. Often television shows run on a different system of time than the real world, so even though it’s been over a month since we watched “Boyle-Linetti Wedding” — the last episode to mention the Jake and Amy romance — it’s possible that the wedding is still fresh to Jake. At least, it certainly seems like it is.

The next day, Rosa (Stephanie Beatriz) asks him what’s wrong, and after telling her about Majors and Amy, Jake reveals he’s been thinking about asking Amy out for the last couple of weeks. It’s a revelation that comes out of nowhere, considering the Jake and Amy romance hasn’t been on the radar lately, but I wish I could say it’s more surprising.

What is surprising is Rosa encouraging Jake to ask Amy out. The last time I remember Rosa giving Jake advice was way back in “The Jimmy Jab Games” when she told him to move on. I guess the fact that he had a failed relationship with Sophia counts as moving on. Or maybe the fact that he tried moving on and couldn’t counts for something.

After Rosa tells him to ask Amy out, Jake decides he has to do it immediately — before Majors can. But Jake is too nervous to bring himself to ask, which, paired with his wallowing in gummy worms over it, is actually endearing. Unfortunately, what happens after that is less so when Jake tracks Amy to the bar he and Majors went to earlier with the intention of ruining her date and I assume asking her out. The fact that he has Rosa’s permission to do this doesn’t make it any less creepy, and it’s never clear why Jake couldn’t have called Amy before the date or something like that.

Luckily, Jake can’t get into the bar because he doesn’t know the password, and after he picks the lock on a fire exit, the bouncer finds him and forcibly removes him. This means Jake doesn’t have a chance to do anything that would make Amy hate him, but he also thinks she’s going to start dating Majors. However, Jake learns the next morning that Amy turned Majors down.

When Jake goes to ask Amy why, Amy says she’s done dating cops after her messy breakup with previous boyfriend this season, Teddy. If I thought this rule would stick, I would be really excited. It is actually a neat twist that after Jake spends the whole episode trying to ask her out, she inadvertently turns him down. Of course that twist only lasted for about a minute before “Brooklyn Nine-Nine” reverses it by showing Amy tucking her hair behind both ears — a move that Rosa says guarantees she likes a guy.

Just like that, at the end of half an hour, we were back to where we started: Jake and Amy clearly both like each other but won’t date. If “Brooklyn Nine-Nine” insists on focusing on a potential Jake and Amy romance, I would prefer if the next time it gets brought up, something actually happens in the plot one way or another so that I’m not wasting my time watching an episode that does nothing for the plot.

Even though the Jake and Amy romance took over a lot of “Det. Dave Majors,” the episode would have been better if it had a better subplot, which featured Gina (Chelsea Peretti) and Boyle (Joe Lo Truglio) trying to stop Terry (Terry Crews) from leaving the squad for a job at a private security firm. To keep him at the station, they’re extra nice to him and even do the extra work Holt keeps assigning.

The main problem with the subplot is that it has no stakes. I wasn’t ever worried that Terry would leave the station — and therefore I would assume, the show — so the ending was a foregone conclusion. The only thing I wasn’t sure about was why Holt was giving Terry extra work. I thought it was possible that Holt wanted Terry to leave, but I wasn’t sure why.

In the end, the reveal was less interesting than that — Holt was tricking Terry into wanting to stay all along. When Terry finally digitized his old cases, it reminded him that in spite of the perks and extra money the security firm was offering, he loves the Nine-Nine. Holt being a mastermind is something we’ve seen before, so with neither the story nor characterization moving forward, that makes “Det. Dave Majors” a filler episode. While it may have been a decent episode, it had nothing more to offer.