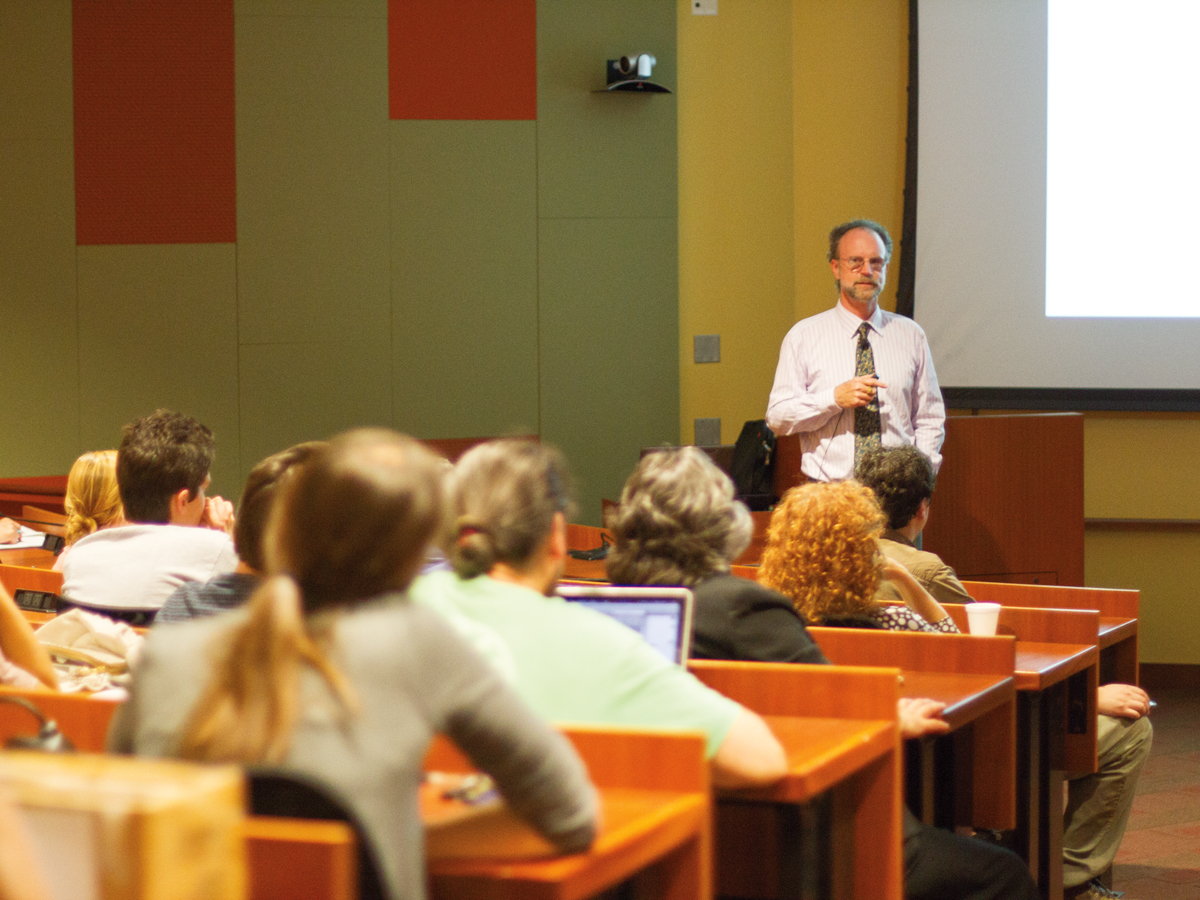 UC Davis Professor of Enology Andrew Waterhouse presented a lecture about wine grapes entitled Vinifera: A Responsive Source of Secondary Products in the UCR Genomics auditorium last Wednesday, May 20. The hour-long lecture attracted a crowd that consisted primarily of graduate and botany students.

Waterhouse began his talk with a brief introduction on some of the variables that can have strikingly distinct effects on what kind of attributes that wine crops can display. Location, climate, irrigation, water availability, time spent growing on the vine and sunlight can influence the flavor, quality, composition, color, aroma and chemical profiles of wine grapes due to their high responsiveness to their environment.

Climate can have an especially large impact on what types of grapes can be grown in an area and what kind of attributes they will display. For example, grapes grown in California for wines such as Pinot Noir and Chardonnay will be subject to the coastal climate of the region, in comparison to the grapes grown in Germany for wine such as Riesling.

“There are famous, we have particular famous varieties, but there are also specific locations which are famous for producing high-quality grapes,” explained Waterhouse. With a high level of wine grape production, California serves as the largest wine producer in the United States and is known to grow a plethora of popular wines enjoyed around the world.

Secondary natural products, non-essential components that are produced in wine grapes, are a response to environmental factors. Examples include phenolics, which contribute to astringency — the physical drying feeling in the mouth with consumption of the grapes; terpenes, which cause the specific aromas that the grapes and wine develop; and flavonols, a chemical developed in response to sunlight which protects grapes skin from burning and enhance the flavor of red wine.

The importance of tannin was also emphasized for its role in a wine’s aging process. “Essentially, a lot of tannin means that the wine will age well, because essentially the tannin is an antioxidant, so as the wine ages in the bottle, small amounts of oxygen come through the cork every year and ultimately…at some point, the wine will be oxidized,” Waterhouse explained.

Tannin is generally found in the seeds and skin of grapes and is expected to be found in good wine growing regions, such as the coastal and agricultural areas of Central and Northern California. Tannin is also seen in areas with high amounts of “water stress.”

Waterhouse later addressed a common belief by winegrowers that fruit grown in small yields has a higher quality than those grown in higher-yields. “In certain areas, you can get higher quality with slightly larger crop, but winemakers hate to admit that.” Waterhouse explained. He also explained that fields with lower yields are usually dependent on the site, which often has fewer resources to support a higher yields of grapes.

Members of the audience asked about whether climate change could affect the traditional winegrowing regions, as temperatures have been increasing over the past few years. Waterhouse explained that growers should focus on retaining the quality of grapes, and suggested that moving northward in response to the negative effects of climate change which can compromise its quality.

The lecture was brought to a close with a lunch and wine-tasting held in the Entomology building courtyard.