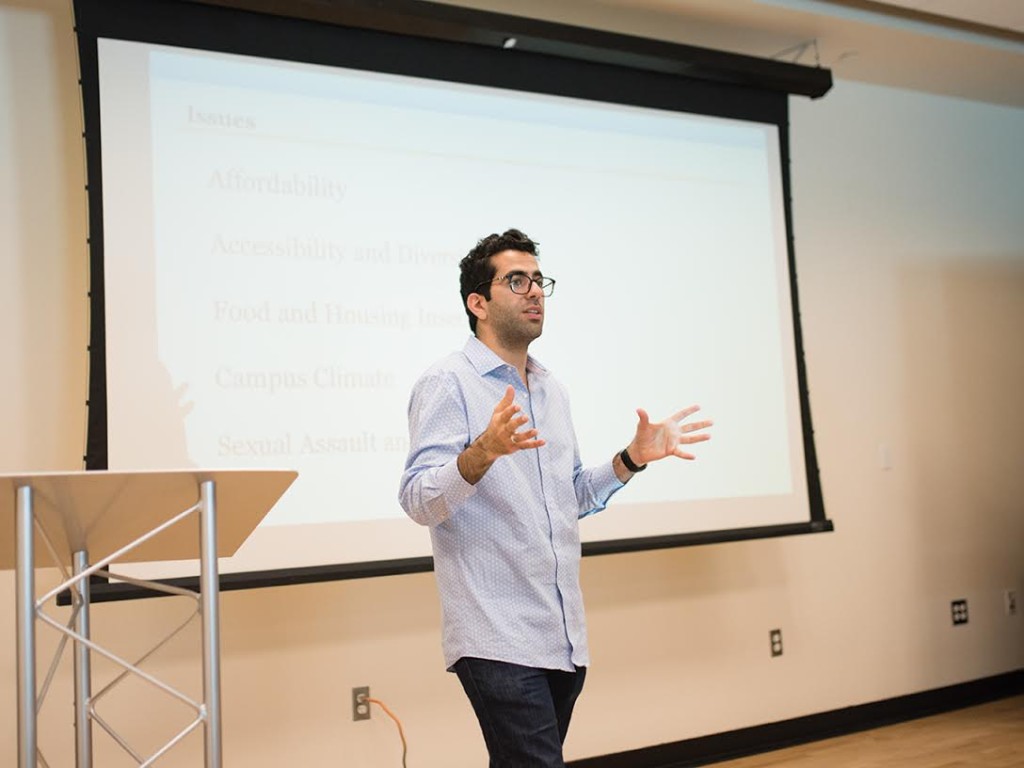 The talk began at 11 a.m. with a brief introduction of the speakers and a brief introduction of the Student Regent position. Avi Oved, the current student regent, is a fourth-year student from UCLA and Marcela Ramirez, the student regent-designate, is a graduate student from UCR. While Oved serves as a voting member of the 26-member Board of Regents, Ramirez sits on the board as a non-voting observer, whereupon she will take over after Oved’s term ends. The two then explained the process of applying for the position, with the chosen student becoming the student regent-designate during Marcela’s term.

The application is available on the Board of Regents website and requires completion of the application, a resume and a personal statement in essay form. An interview is also required and the process involves an interview with the regional student body presidents, the University of California Student Association (UCSA) and the University of California Board of Regents Selection Committee.

In between exploring the minutiae of the application process, the two added small hints for having a strong application — which included having strong references that can speak highly of one’s personal character and making the resume portion as comprehensive as possible. They also fielded questions from the attendees mid-presentation. One student asked if undocumented students were eligible and they explained that any undergraduate, graduate or professional student was allowed to become student regent, regardless of immigration status.

The two concluded their presentation with a list of tips for applying as well as a rundown of the perks of the job. They advised students to finish the application before the Feb. 28 due date, write the personal statement like a narrative and personally reach out to them for any help. “There’s no prescription for being the next student regent,” Oved added during the tips portion of the presentation. As for perks, student regents have free tuition for two years, a parking pass for any of the 10 UC campuses and an office with a budget for staff.

The two discussed several issues they aim to address during their tenure before opening the Q-and-A portion of the event. One student asked for clarification on the makeup of the Board of Regents, while another asked if students could hold a concurrent elected position while serving as student regent. The two explained that while having a background in student government is helpful, students must relinquish their elected positions or they will not be able to serve when their tenure as student regent begins.