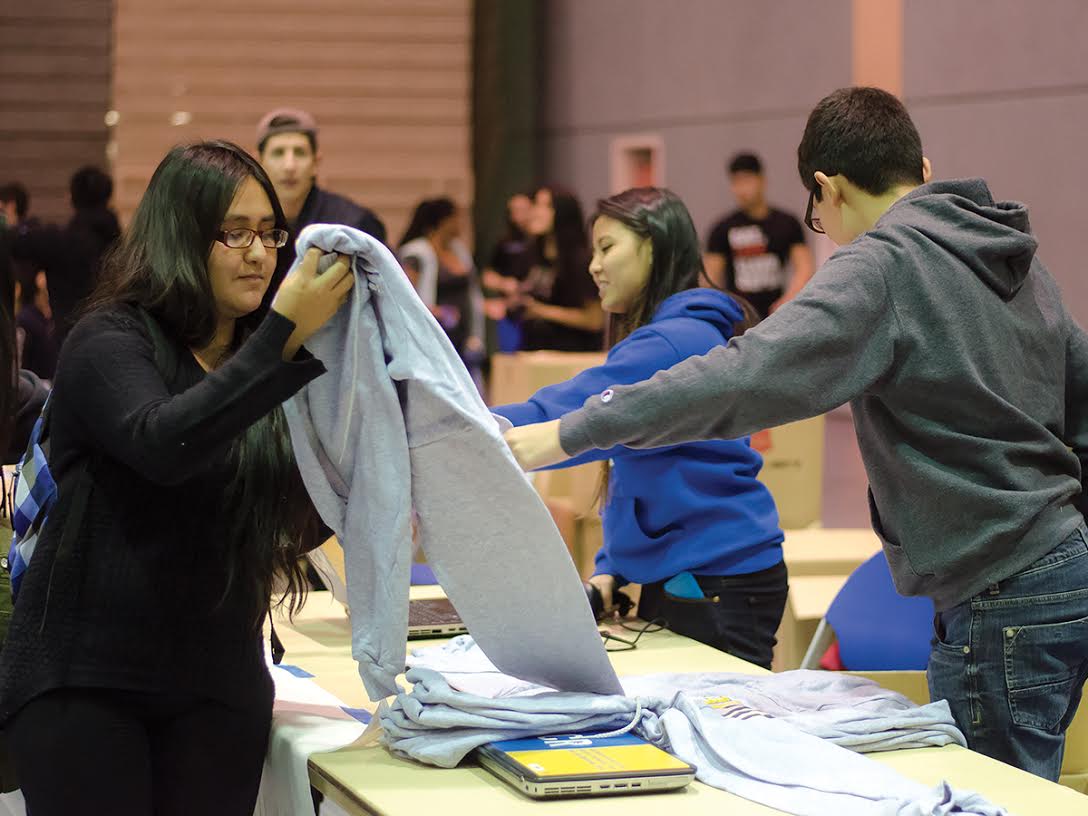 Beginning at 5:30 p.m. on Jan. 12, hundreds of UCR freshmen formed a line that originated from the Student Recreation Center (SRC) Arena and extended out to the intersection of W. Linden Street and Aberdeen Drive to attend the launch of the second annual R’Gear program.

R’Gear is an initiative that was passed with the intention to invoke “highlander pride.” Its budget was approved during fall quarter after changes were made to the way that the program would be run in comparison to that of the prior year. Some of the changes made included further decreasing the cost of the program and not including any class-specific logos.

Although the availability of the sweaters was first-come, first-served, students who wanted a free sweater were asked to fill out a form that was sent out to the student population. Students were also required to post a status or picture via popular social media sites such as Facebook, Instagram or Twitter using the hashtags #ILoveUCR, #RGear or #ASUCR.

“I think that this was really cool how we get free sweaters and … it’s a great opportunity for like, the newcomers,” expressed Alicia Beltran-Beltran, a first-year psychology major.

First-year business economics student Nathaly Armas also agreed that R’Gear was a program that she enjoyed. “I think that it’s nice to get something back … It also gives us another piece to wear around school and just to show our pride … our Highlander pride.”

While freshmen were given priority in receiving a free sweater, other classes were able to obtain theirs the next day. R’Gear was planned to take place over a span of four days, but all of the sweaters from this year’s order were distributed by the second day.

“I think that it was very popular, like we ran out by today for all the new ones by one o’clock, so day one,“ said ASUCR Vice President of Finance Shafi Karim on Wed. Jan. 13. Karim played a key role in helping R’Gear continue for its second year by minimizing costs and reducing items in the ASUCR budget to allow for spending on this program. “We expected to run out, but I didn’t expect it to run out that quick.”

Because of the changes made in terms of cost in comparison to last year, Karim explained, “The reason we ran out so quick is because I did order less for this year because we were spending $21,000 … more than $21,000 less than last year.” This year’s total costs for the sweaters totaled approximately $30,728.88 for more than 3,000 sweaters and were certified to be sweatshop-free by the graphics shop they were ordered from.