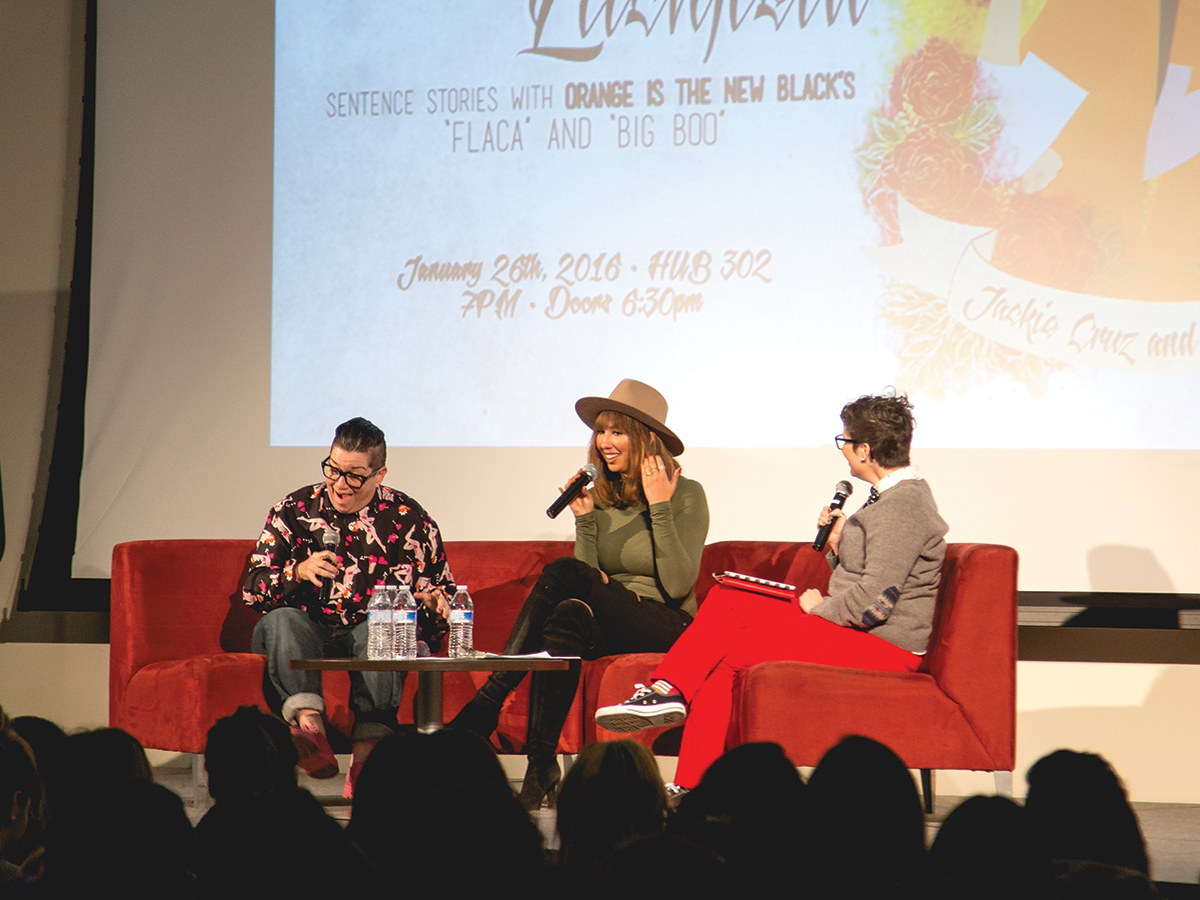 Students packed into Hub 302 to spend an evening with actresses Lea “Big Boo” DeLaria and Jackie “Flaca” Cruz from the critically acclaimed Netflix series, “Orange Is the New Black.” The discussion was moderated by Megan Rush, staff member at UCR’s LGBT Resource Center, and much like show creator Jenji Kohan’s breakout hit, the event elicited narratives of empowerment, failure and success, as well as moments of comedic genius, all accentuated by talented actresses whose lives seem to be just as compelling as the characters they play on TV.

The fandom was definitely palpable; I overheard a student while waiting at the back of the line exclaim, “We better get in! I guess I’d be okay with just seeing them even for five minutes.” I’d be lying if I said I wasn’t super-stoked to finally see the people who played the characters I had long watched from my smartphone, laptop and TV screen. How could anyone attending not be? Based off of the show, these actresses were able to give you complexity, diversity and comedy without coming off as cliche or resorting to the old tricks of the trade that have permeated our popular culture. There was something special about the way viewers seemed to connect with the characters in the show. When I got to my seat and the event finally started, I found out why that was.

Though she joked that she was nothing like her character on the show, DeLaria was almost inseparable from the smart-mouthed Big Boo that the writers had created specifically for her after she almost quit show business and threw a “hissy fit” for not getting cast in the first place. After an enthusiastic audience member shouted, “Oh my god! You’re serving looks!” she responded in a way that only Big Boo knew how: She tossed her head back and chuckled, “Fag,” to the applause and laughter from the audience. Her 30-plus years of doing stand-up, speaking at universities and participating in protests, for which she’d been arrested, really shone through as she often provoked laughter from the audience with her one-liners. She wore a silky purple shirt emblazoned with naked ladies who had heart vaginas. It was as if Boo had been released from Litchfield and joined the college speaking circuit.

Cruz also identified with her character Flaca. She said that their similarities were that they both have a love for music. Cruz is simultaneously pursuing a singing career, though she felt that Flaca was cooler than herself. She shared that she didn’t have many friends in high school and was a part of marching band. When asked if her upbringing in the Dominican Republic helped shape her understanding of her character, she answered affirmatively that being raised by five Latinas allowed her to understand “all types of women” because her family members exhibited “attitude in many different colors.”

The conversation then turned to female identity and representation in Hollywood. Though DeLaria said she no longer has to deal with one-dimensional roles that she was known for in the ‘90s — that being the dim-witted butch lesbian who inappropriately hits on straight women — she still stressed the problem of the pay gap between men and women. Cruz on the other hand shared her experience with not looking “Mexican enough” and dealing with casting directors who “didn’t know where to place (her).” Later she said that she still auditions for roles for characters who don’t speak English.

After anecdotes about the cast hanging out in the smallest room possible, gossiping and making dub-smash videos from Cruz and on-set hijinks between DeLaria and actress Natasha Lyonne, who plays recovering dope addict Nicky Nichols, Rush asked the women if they had any advice for people who wanted to break into the industry yet maintain one’s sense of self. DeLaria answered that it was incredibly hard to be yourself but that the most important thing was to never give up fighting for your dreams, always believe in yourself and never be afraid to say no.

Rush then asked the women to share their experiences with body image in the context of Hollywood. DeLaria reminded audience members that though society and Hollywood are always trying to fit people into cookie-cutter images, “You are beautiful as you are. You are fucking gorgeous.” Cruz shared a heartfelt story about a car accident she was involved in when she was 17. The resulting brain surgery left her with a shaved head, paralyzed face, two broken vertebrae and a contused kidney. She said she had all but given up on acting since she didn’t feel like anyone would cast her. It wasn’t until she met a 7-year-old girl named Mely in rehab who was paralyzed from the neck down and spent her days listening to Cruz cry. Irritated, Cruz asked the girl why she was there and she answered, “You’re really pretty. You had brain surgery too right?” She said that the little girl saw a strength in her that she herself couldn’t see. Cruz also shared that the meeting between the two carried her through her Orange Is the New Black audition.

The final question by Rush was the age-old, “If you could have dinner with anyone living or dead who would it be?” Cruz answered, “Elvis Presley.” DeLaria’s final remarks: “Catherine the great, because she was a nympho.”