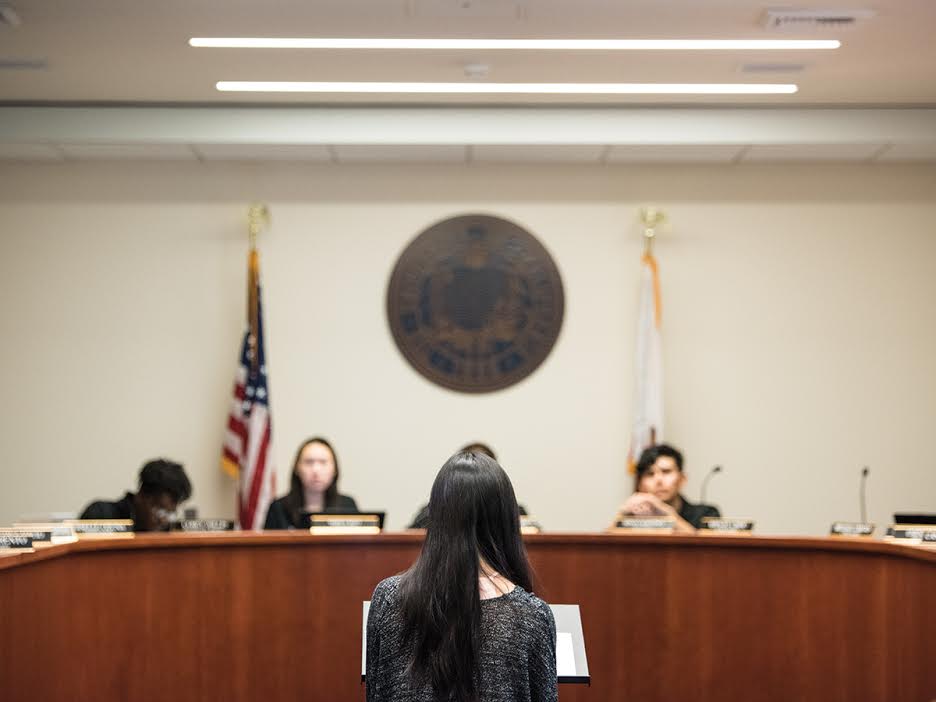 The ASUCR senate convened last Wednesday in the senate chambers to pass a resolution for nutritional labeling of HUB foods as well as a resolution to allow open-source textbooks. Also during the meeting, a justice from the ASUCR judicial council read a majority opinion that ASUCR acted unconstitutionally when it appointed an interim vice president of external affairs.

On Jan. 27, 2016, Oscar Loera was chosen as an interim to replace the vacated position left by ex-vice president of external affairs, Mohamed “Momo” Hussein, after his censure. According to the ASUCR constitution and more specifically to the ASUCR election bylaws, “Special elections may be called by the Senate to fill vacancies arising in the elected offices of ASUCR if there are no alternates available.”

The majority opinion, handed down from the ASUCR judicial branch, hinged upon and referred to this bylaw and deemed that the ASUCR senate acted “unconstitutionally” when they appointed Loera. Justice Hayden Jackson read aloud the opinion near the start of the meeting, stating, “There are in fact alternates available for vice president of external affairs position and the alternates were not considered.”

Jackson continued, “While the vacancy because of the result of censure is temporary by nature that does not mean it is a vacancy that is referenced in the ASUCR constitution or the election bylaws. For the purposes of appointment of an interim officer, the vacancy is the same no matter how it is created and it must be dealt with according to the process outlined in the elections bylaws. The ASUCR senate acted unconstitutionally … proceedings must take place to appoint the proper alternative position immediately.”

The majority opinion was unanimous with all six justices of the judicial branch signing onto the document. Jackson did not take questions from the senate after reading the statement. Loera, who could not be reached for comment by the time of publication, has the option to appeal the ruling if he wishes.

Later on in the meeting, Senator Alan Alcantara presented a resolution that requires foods sold through campus and residential restaurants be labeled with caloric, sugar and macronutrient content. The resolution referenced the Food and Drug Administration (FDA)’s goal to implement provisions of the 2010 Affordable Care Act that mandates that nutritional content is labeled for “all products intended for human consumption and offered for sale.”

“I think this will help people become more health-conscious and choose healthier choices,” said Alcantara of the effect of the resolution in relation to students. The resolution was passed unanimously.

ASUCR Academic Affairs Director Angelica Tan also gave a presentation on her resolution that will launch a campaign to help alleviate textbook costs for students. The resolution cited that prices of textbooks have inflated 82 percent during the last decade. This in turn has caused students who “barely meet the minimum requirements to pay for tuition, rent, and … their next meal,” to “pinch even harder on their already tight wallets,” according to Tan. The resolution also attributed rising prices to the “monopoly” that four textbook companies have over the textbook publishing industry.

The resolution willed that “ASUCR spearheads a textbook-alternative campaign that calls on students, faculty, and government representatives, to support the use of open-source textbooks and more low-cost initiatives to give equal access of education to UCR students.” Tan hopes that a subcommittee composed of student volunteers and student organizations can be created under Academic Affairs to oversee the implementation of the campaign’s goals.

As well as access to open-source textbook, defined as “a way for education to be freely dispersed via the internet without infringement or copyright issues,” the resolution intends to “gain faculty permission to put necessary education material on e-reserves of campus libraries.” The resolution was also passed through the senate unanimously.