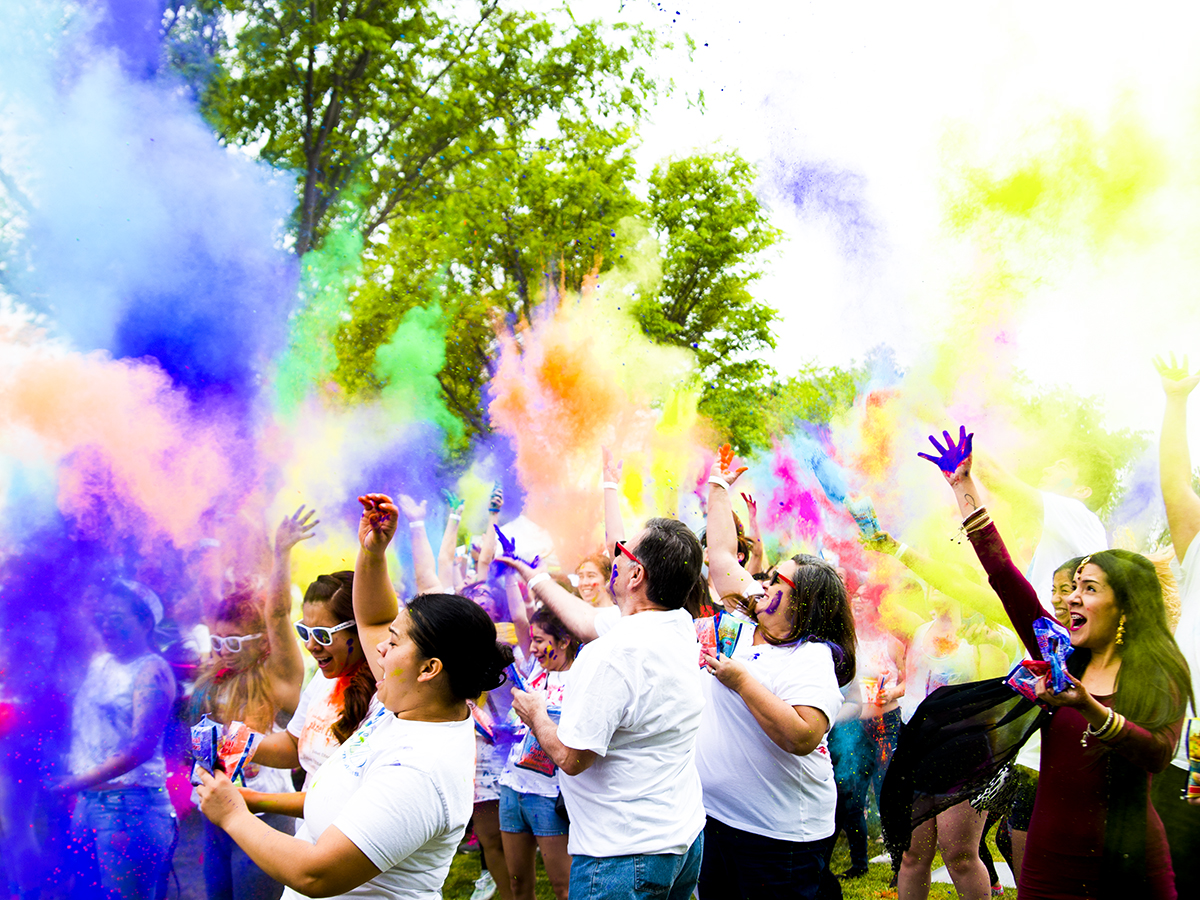 Riverside experienced its first-ever color throw on Saturday, March 5 with the Holi Festival of Colors. Holi is an ancient Hindu religious festival that has gained popularity with those outside of the Asian community. Taking place at Martha McClean Park, attendees were able to indulge in delicious vegetarian food, stress-relieving yoga, intriguing live music and perhaps most importantly a color throw — an opportunity for people to shower one another in powder of all colors.

Upon arrival, guests were greeted with several colorful tents containing different products ranging from books on meditation to T-shirts with phrases like “free hugs” and “om.” To the delight of many, there was even a tent selling books and art for the chosen donation price of each individual customer. People were able to stay hydrated with Neurosleep, a drink that is supposed to make you feel recharged but restful whenever you decide to hit the hay, as well as energized with a variety of food including samosas, samosa chaat and chole bhature.

A few people could be seen participating in yoga, arms outstretched to the somewhat cloudy but beautiful sky, while some sat with friends and family in lounge chairs or the grass enjoying the sight of young children splashing each other with orange and blue powder. Others danced in front of a small main stage to live music. The upbeat sounds of duo Sri Kala Chandra got everybody moving. Songs about love, unity and good vibrations filled the air as people swayed to the music while periodically dousing one another in colors.

DJ Srikalogy made sure to interact with the crowd, infusing hip-hop and rap in his set while talking to the crowd about the importance of love and kindness in between. The mantra “Hare Krishna” was repeated in several songs within the mantra bands’ sets. Composed of Sanskrit names, the mantra refers to the supreme god, Krishna, found in Hinduism.

At the top of every hour, guests were encouraged to gather near the stage for a mass color throw. “Before we throw the colors, I want everyone to find someone to hug,” the host said. “Yay free hugs,” I heard someone yell, as everyone embraced one another with smiles and laughter. “Say ‘I love you,’ ‘I miss you,’ ‘I appreciate you!’” the host shouted. Music blasted from the speakers as the host screamed, “One, two, three!” All at once, hues of blue, pink, orange, purple and red burst into the sky. Cheers erupted as people danced and continued to throw colors into the air and on the people around them. Almost everyone within view was covered in colorful powder — even a few dogs were decorated in the bright colors.

After everyone settled down a bit, the host asked everyone to put their arms around each other while he spoke about how to incorporate love and happiness into your life. Onlookers linked arms with those standing next to them as he continued to speak. “Let go of negative energy,” he encouraged. “Your future is so bright, you’re going to need sunglasses,” he joked. The atmosphere was charged with kindness and people continued to hug and chat with strangers and friends alike.

Next to perform on the main stage was Malini, an artist who encouraged the audience to participate in interactive dance. “Try this!” she exclaimed, while swaying her hips and jumping from left to right. She even hopped down from the stage to start a dance train with those in the crowd. The train began as a large, unified circle but soon dispersed into several small trains that left everyone trying to figure out what direction to go in next in between giggles. Malini continued by returning to the stage and teaching all those watching a few Bollywood dance steps. Several eventgoers were unafraid to try the moves, hopping and laughing it off if they stumbled.

Malini thanked everyone for coming out before making way for Lokah to take the stage. A certified yoga and dance instructor in Puerto Rico, Miami, New York City and Los Angeles, Lokah knew just how to get the crowd moving. He danced onstage to Latin-inspired music while talking to the audience about happiness and love in the same vein of the other performers. Much to the delight of the crowd, he also started another dance train. “When I say ‘hare’ you say ‘Krishna,’ hare!” he exclaimed to the responsive yells of the crowd.
More and more attendees grabbed what was left of the food and settled down on the grass as the event began to come to a close. People snapped a few more pictures with friends and chatted with those they’d just met before picking up trash and helping to break down a few of the tents. This action in and of itself demonstrated the abundance of kindness found in almost everyone who attended the Holi Festival of Colors. Here’s to hoping that this won’t be the last we see of this love-filled color throw event.