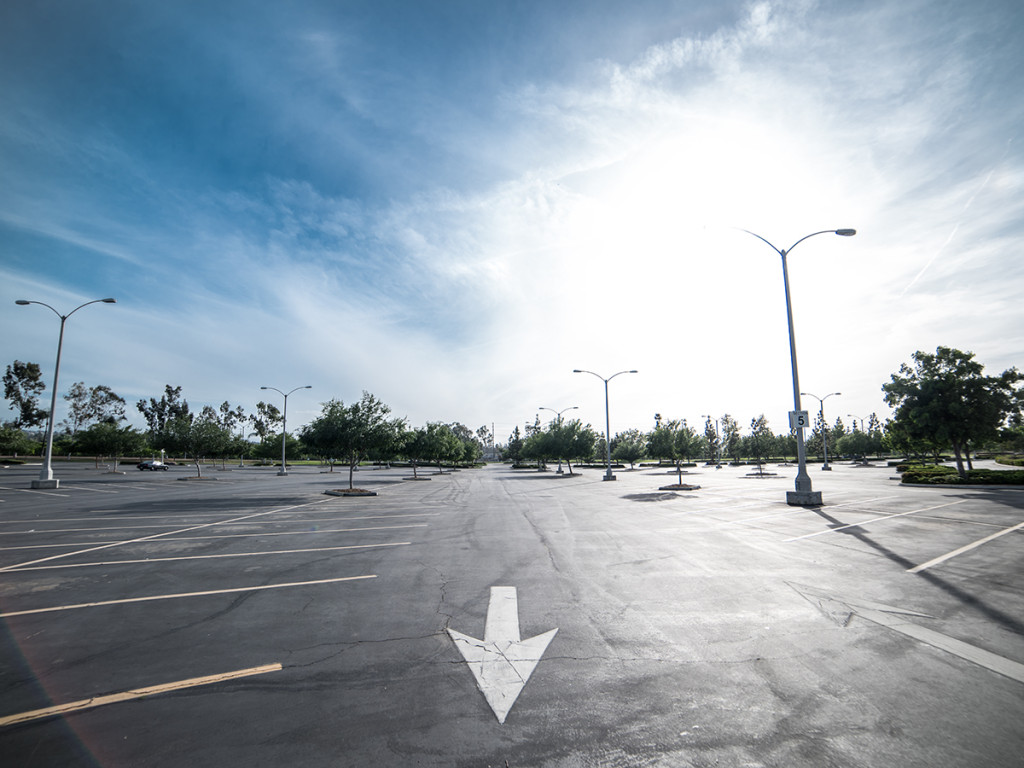 “Day upon day, and year upon year, O city, walking your streets, / where you hold me enchain’d a certain time, refusing to give me up; / yet giving to make me glutted, enrich’d of soul …” – Walt Whitman, “Give me the Splendid, Silent Sun.”

Staring over the crowd of cars, neighborhood poet and avid sidewalk sitter Adriana Moore pointed out the parameters of Lot 30.

“A decade ago, construction on this space began at the intersection of Martin Luther King boulevard and the exit for the 215 freeway. Then, they kept on paving and paving concrete and asphalt until all of this beauty,” gesturing before us with a long sweep of her hands, “was finally finished.”

Moore was not false in her characterization of the lot.

As the last rays of the evening sun shined off car tops and the grease of littered fast food, everything and everyone in Lot 30 were tinted in twilight — except for what the flickering lamp post’s soft light touched (like the used condom on the ground, glistening something wicked). For the past hour, the rattle of dried trees against the slight breeze was accompanied by the screeching of a car alarm. The scent of smog perfumed the air.

“Wordsworth had Tinturn Abbey, Coleridge had Xanadu, but we — we have Lot 30,” said Moore, puffing out cigarette smoke that blended with the smoke from an exhaust of a running car we sat next to.

“No one is quite sure how all this came about or whether such an endeavour was worth the capital and time.” She explained the original blueprints for the parking lot were only sketches uncovered by a Parisian architect and a Venetian bartender, who took it upon themselves to bring the half-finished piece to life.

After a hasty deal with the university, weeks of construction and a generous donation from Andy Warhol’s ghost, Lot 30 came to be, but was met with no applause from the community. “Some have blamed a person from Porlock for interrupting the genius at work in these sketches, others assert the Parisian took too much liberty in the piece, spurred on by national pride,” said Moore pointing to the pile of french fries and Pinot Noir bottles adorning the grass.

No matter the contention, all agree that any fault in Lot 30 does not lie in its failure as a parking lot for the students of UCR. “If the artist truly wanted to create a piece with that goal in mind — to develop more parking spaces —  then he would have sketched the beginnings of a multilevel parking structure — not a flat surface. That simply doesn’t make sense at a commuter college. There’s no doubt about it. Lot 30 was not constructed for other means.”

However, these are means that local historians remain baffled by. Today, many still tackle questions, such as what is Lot 30’s purpose to the university, the greater Inland Empire? Why do french fries continue to appear around here? How does a ghost make a donation?

“But, none of that matters,” Moore mused with her 12th cigarette twirling between her fingers. “What matters now is what you see, what you feel once you step onto this cracked concrete and away from all that is suffocating — the lofty skyscrapers, the maddening crowd, the trienta Starbucks lattes stuffed with sugar and ambivalence.”

In this age of continual modernity, most are too engrossed in the progression of society and technology to take a step back and breathe. We have lost the ability to appreciate mere moments due to our linear focus toward progression of certain goals: to graduate college, to get a career, to get married, to have children.

During her time as a UCR student herself  some odd years ago, Moore came to understand Lot 30 provided the escape whenever she cycled about in her her jalopy of a car for hours on end.

In her eyes and the eyes of others who have gazed upon Lot 30, time actually seems so slow while one idles their engine amongst the concrete and asphalt. In fact, it acts as a more of a reflexive exercise, as you begin to see more and more of yourself reflected in the blacktop as you cruise around and around in a commuter’s ouroboros, waiting minutes, hours, days for a spot to open during the crunch of finals week.

“I found myself understanding that the parking spot meant nothing — it was not a means to the end, but a means to a beginning to find the parking spot within my own life, which I needed to fill on my own terms,” stuttered Moore as she accidentally toppled the mini pile of cigarette butts next to her.

“Look at that road, doesn’t it excite you with memories of childhood? When you had a road right in front of your house, but then all your pet frogs were murdered in that gravy avalanche? Or this chewed piece of gum? Isn’t this just a symbol of your failed relationship with Stephanie that ended five years ago, but you are left nights that are dark, endless and impossible to sleep through due to thinking about the lavender smell of her hair?”said Moore.

One has to wonder how much of this could be the viewer’s own projections of meaning upon Lot 30 and how much of it was intentional. I did find it odd though, that in viewing the original plans the original architect had scrawled “And if you gaze long into an abyss, the abyss gazes long into you” in the bottom left corner.

For some, Lot 30 is a mere inconvenience, while it used to be the end of the line for others. “We’ve all heard stories of the children entombed underneath UC Irvine’s parking structure or the students falling off the bluffs at Long Beach,” a passing, wizened old sage explained, unprompted, “but this lot has secrets all its own, bones it left to dry in the sun, ghosts it can’t shake.”

I wanted to ask for more information, but at a second glance the old sage had burst into flames and turned into ash, carried by the wind. “You see them too?” asked Moore, shaking with the harsh reality of herself.
I didn’t answer — I saw my dead mother in the asphalt, looking me at me with only the whites of her eyes.