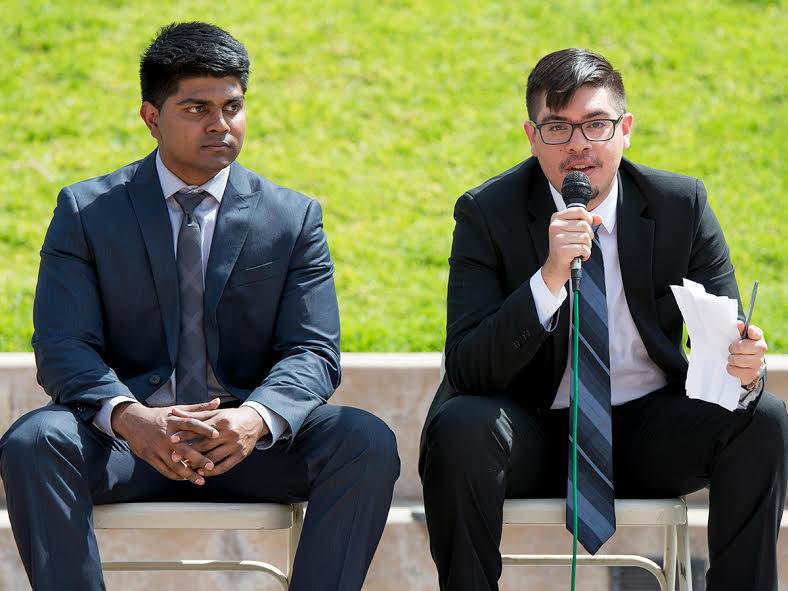 The ASUCR presidential debates were held outside the Highlander Union Building (HUB) on Wednesday, April 6. Highlander Newspaper News Editor Aaron Grech moderated the debate between Shafi Karim from the [YOUR]Side party and independent candidate Arturo Gomez. Grech asked questions concerning the cancellation of Heat, tuition hikes and the platforms of the candidates.

The candidates differed on their views of the cancellation of the Heat Music Festival. Gomez said he believes it is more important to focus on the “safety and financial well-being of our student body, so that way students could be more proud of their campus and their leadership.” On the other hand, Karim said he will fight to ensure that Heat is continued, and he promised that he “will be the voice of the students and not the voice of the administration.”

Candidates were also asked what they would do in office to prevent the UC Board of Regents from raising tuition in 2017. Gomez mentioned his prior experience as an activist and said he would “consult with the council of presidents, consult with UCOP and the administration and organize rallies.” Karim agreed with Gomez that it is necessary to consult with UCOP, but he stressed the importance of extending the 2016 tuition freeze, which prevents tuition raises for the UC until 2017. Karim also pledged to begin a petition to extend the freeze on the tuition hikes.

Students from the audience were able to ask the candidates questions about their platform and their goals if they were to be ASUCR president. The questions ranged from issues about campus safety, Heat and Title IX. Semi Cole asked Gomez about his attitude toward the administration and questioned, “Is it wise to continue this contentious political regime between ASUCR and the administration?” Gomez rebutted this by saying he would rather work with them, but he then recalled the administration’s “actions against students” and said he will fight them if he needs to.

Multiple students asked both candidates about their plans to maintain and improve campus safety. Both Gomez and Karim plan to make sexual harassment and consent training mandatory for all first-years and incoming students. However, Gomez wants to go a step further and push for the expansion of the point-to-point shuttle service to protect students walking home from campus. In addition, Karim said he plans to continue his work on creating an Uber service for students so they “do not jeopardize their futures” by drunk driving.

In their concluding statements, Gomez and Karim once again reminded their audience of their prior experience and wished each other luck in the elections. Gomez emphasized his experience in local government, and said that he feels his “experience as an advocate qualifies him greatly to be the president of ASUCR.” Karim then followed Gomez by thanking his mom for the support she has given him saying that she “showed him the strength and will to get through any obstacles in life.”

Voting will be open from April 11 to April 15 at the Bell Tower and students can also vote online at elections.ucr.edu.