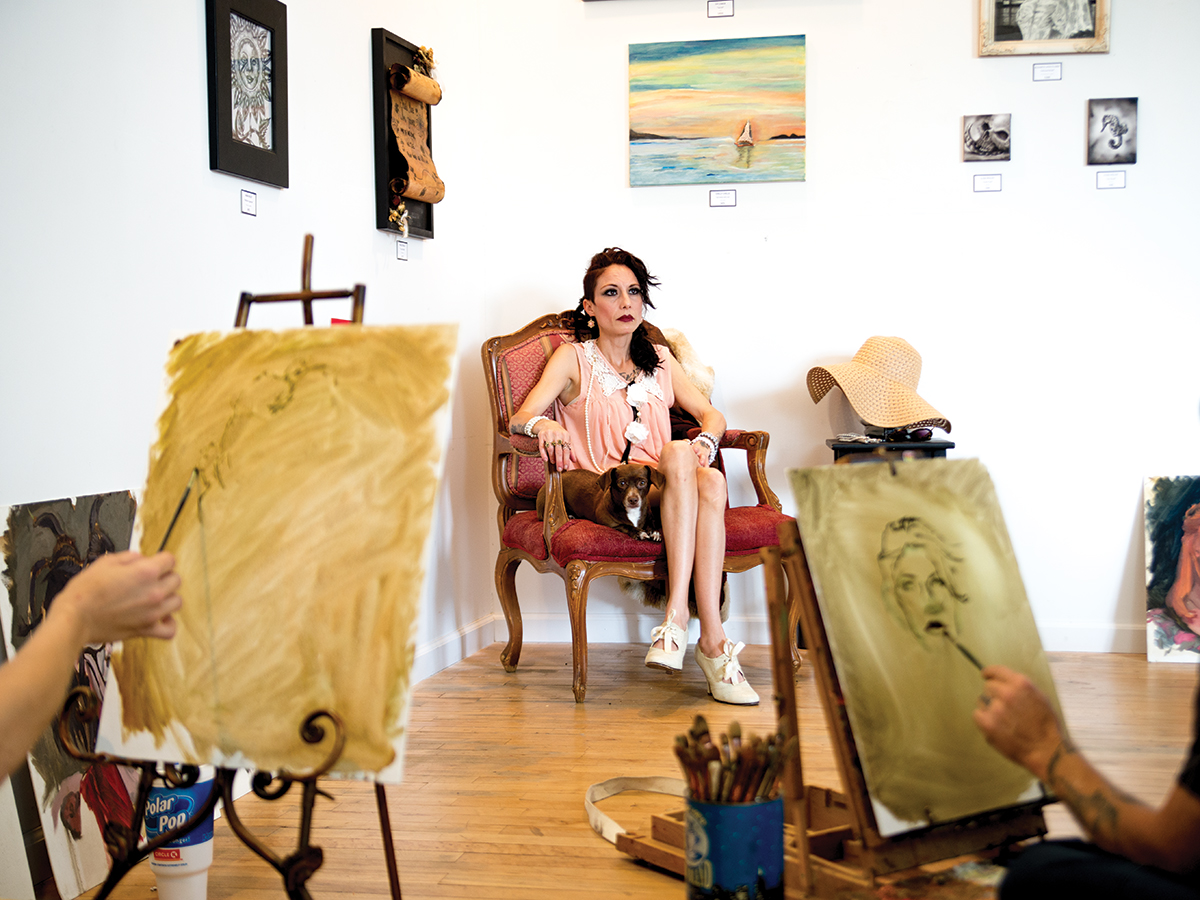 Last weekend, the heart of downtown Riverside was pulsating with the excitement of the 16th annual Saturation Fest, which celebrated the burgeoning music and art scenes of the Inland Empire and greater Los Angeles area. The festival featured musicians, D.I.Y. art pieces, films and music videos all contributed by local artists, on top of vendors of all sorts. The weekend long event highlighted the unique aesthetic sensibilities of artists from the Inland Empire.

As the sun set, dowsing downtown Riverside in a gentle glow, I approached the entrance of Back to The Grind — one of the premier hang-out spots in the area — not knowing what to expect. The venue was filled with people of all ages, decked out in all different types of styles, ranging from outlandish to urban, all milling about waiting for someone to take the stage. One immediately felt the expectation in the air.

This was my first time attending the Saturation Fest, which revolves around local artists showcasing their talent in a variety of mediums: Musicians, painters, filmmakers and the like.

While Friday augured the beginning of Saturation Fest, the entire event at Back to The Grind was immensely entertaining –— watching local musicians exhibit new material and covers of their favorite songs. As I bought a coffee and sat down to enjoy the music, it was nice to see that the alternative aesthetic of the Saturation Fest did not merely devolve into a hipster event, but  an overall celebration of culture from the Inland Empire. It made me proud to be from Riverside, as much as I would feel if a potential president visited.

It was 72 degrees with a slight breeze and not a single cloud in the aquamarine sky.

Although still officially a month away from the new season, it felt like summer at the heart of downtown Riverside on Saturday, May 28.

Saturday centered upon the Inland Empire Record Collective, which featured new and used records, CD’s and books. These curiosities filled up a row of tents that anyone could browse under and consisted of both completely new (still in the white plastic shrink wrap) and clearly used (white paper edges being exposed and front cover scratched) collectibles. At the end of the rows of tents was the center stage, which hosted a montage of soul, punk, rock and psych bands. While each band appealed to different listeners, the underlying aura of belongingness  linked each one into a comprehensive, mind-clearing summer set list.

A versatile strip of art vendors also lined the street with eye-catching craftworks that ranged from Renaissance masks made out of shiny, multicolored metals to Barbie dolls redesigned to suit diverse aesthetics, such as a Pocahontas doll having half her face painted in a sugar skull design and a Cinderella doll dressed as Harley Quinn.

As much as I enjoyed all of this, the near-summer heat was overbearing. I ventured around the area and found myself in the sanctuary called Back to the Grind, which was so versatile and intricate in design that it seemed like there were about 20 new things inside that weren’t there a month ago.

Although there were a good amount of festival-goers lingering around upstairs, most likely faithful regulars, the brick-walled basement downstairs was packed like a can of sardines. As soon as I stepped off the staircase, I discovered that I couldn’t walk any further without asking someone to move out of the way; the entire entrance was jammed like shavings in an overfilled pencil sharpener and the fact that it was pitch black didn’t make navigation any easier.

After accidentally stepping on a few feet and squeezing past seven bodies, I made it to the couch area only to find that it was filled up as well. The only area where I could sit was in front of the stage, where the Digital Death Film Fest was taking place.

I was immediately hooked with the first video, which was a lo-fi rap video with unusual, dark imagery and slightly screechy background noise that reminded me of a VCR tape being jammed in a player.

Not only did the eerily irresistible music video pull me into the film showing, but the pitch black room, noisy fan and room full of content, young audience members made me feel like I was back in my old house as a five-year-old, having a sleepover with my childhood friends.

Usually I feel self-conscious doing anything in public alone, but I felt completely at home sitting on the floor of the dark basement. Even though I enjoyed the vibes of the outside festivities, I felt at home in the basement at Back to the Grind and realized that the Saturation Fest aimed to provide a place for everyone. There is, after all, a form of art for everyone, regardless of their background or aesthetic.