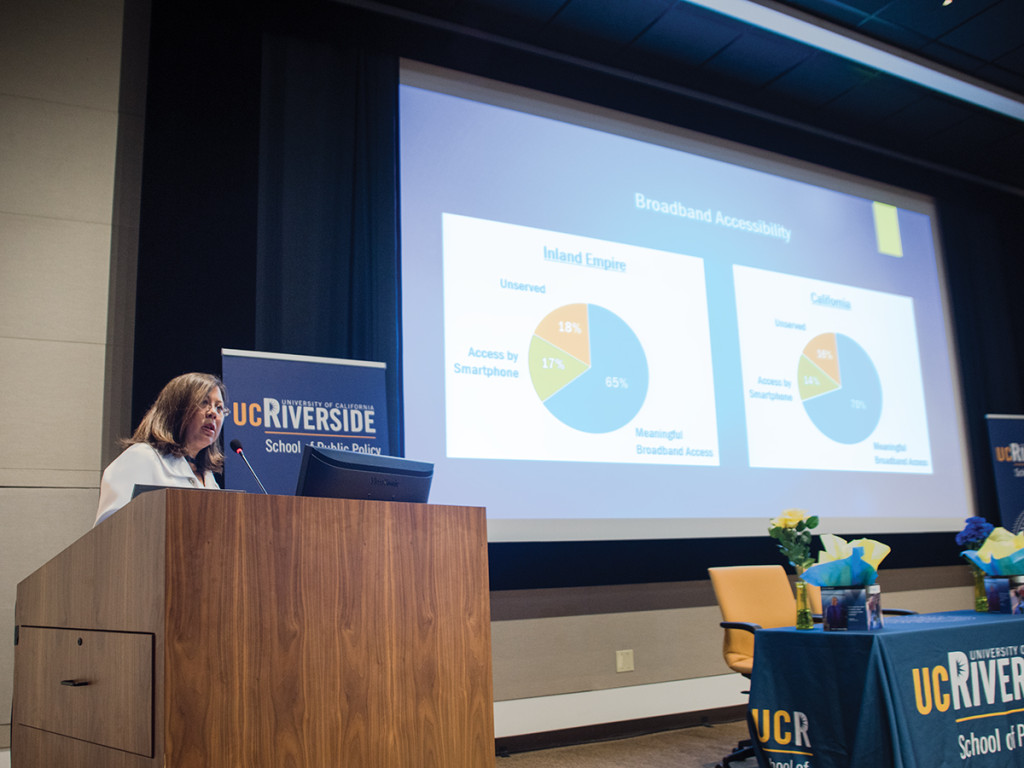 On Wednesday, Sept. 28, the UCR School of Public Policy (SPP) hosted a seminar with California State Controller Betty Yee. Professor and Associate Dean of the SPP Karthick Ramakrishnan was there to both introduce Yee and moderate the subsequent question-and-answer session following the lecture. Titled “From Gold to Silicon: What’s Next? The Past, Present, and Future of California’s Economy,” Yee’s presentation focused on the availability of and access to broadband internet for the underserved in California, as well as meaningful and viable tax reform that reflect California’s changing economy.

Prior to being elected as the state controller in 2014, Yee served on the State’s Board of Equalization in 2006, an agency in charge of tax administration. As controller and de facto Chief Financial Officer, Yee described her duties, which include “jurisdiction over tax policy as well as environmental and financing authorities that are helpful to various sectors to our economy.” She also serves in over 79 boards and commissions, the primary ones being the California Public Employees’ Retirement System and the California State Teachers’ Retirement System Boards.

Yee commenced the seminar by highlighting how California is “home of the highest rate of poverty in the United States,” despite being world’s sixth largest economy. She added that while “paying the bills” of California, as well as managing revenues and cash are the paramount goals as state controller, the primary objective and focus for her is the financial health of individuals across the state. “We can’t have a healthy state, economically, without ensuring that every individual and family in California has the tools and the know-how and opportunity to succeed and thrive,” said Yee.

Even though the United States has undergone consistent economic growth since the Great Recession of 2008, according to Yee, “It’s clear the effects of the recovery have not been felt by every corner of the state.” Yee argued that many of these individuals who have not been lifted by the recovery have been further disenfranchised by the digital revolution, creating what she called a “growing digital divide.” She cited a recent field poll, which reported that “30 percent of people (in California) still do not have access to reliable high-speed broadband in their homes.” This concern is especially pertinent to the Inland Empire, an area where the poll reported that 18 percent of people lack any sort of broadband. Yee stated that these individuals “are not on an even playing field” due to the difficulty in navigating websites and having the access as those with proper broadband.

Yee stressed the importance of providing meaningful access to the internet, saying, “If we don’t make any progress toward expanding broadband access and the ability for Californians to connect, we’re essentially going to have our economic shifts leapfrog, and have many of these opportunities elude many of these communities in California.” According to Yee, minimizing this divide is a crucial piece for economic recovery in California.

Yee also argued for comprehensive tax reform in a way that would “facilitate more fiscal management and spur economic development and growth.” She pointed to the dysfunction in the relationship between local and state governments and recommended that “affluent communities should not be at the top of the heap with respect to having the highest level services … so that’s the discussion we need to have.” Yee hopes to have “a more public conversation” about changing the state’s tax system. “I look out to each and every one of you as a stakeholder in comprehensive tax reform … I hope you will think about it in terms of how it will affect your lives,” concluded Yee.

Yee, a San Francisco native, is an alumni from UC Berkeley, where she received her bachelor’s degree in sociology. Yee is also a co-founder of the Asian Pacific Youth Leadership Project, an organization devoted to exposing California’s youth to public service and public policy.