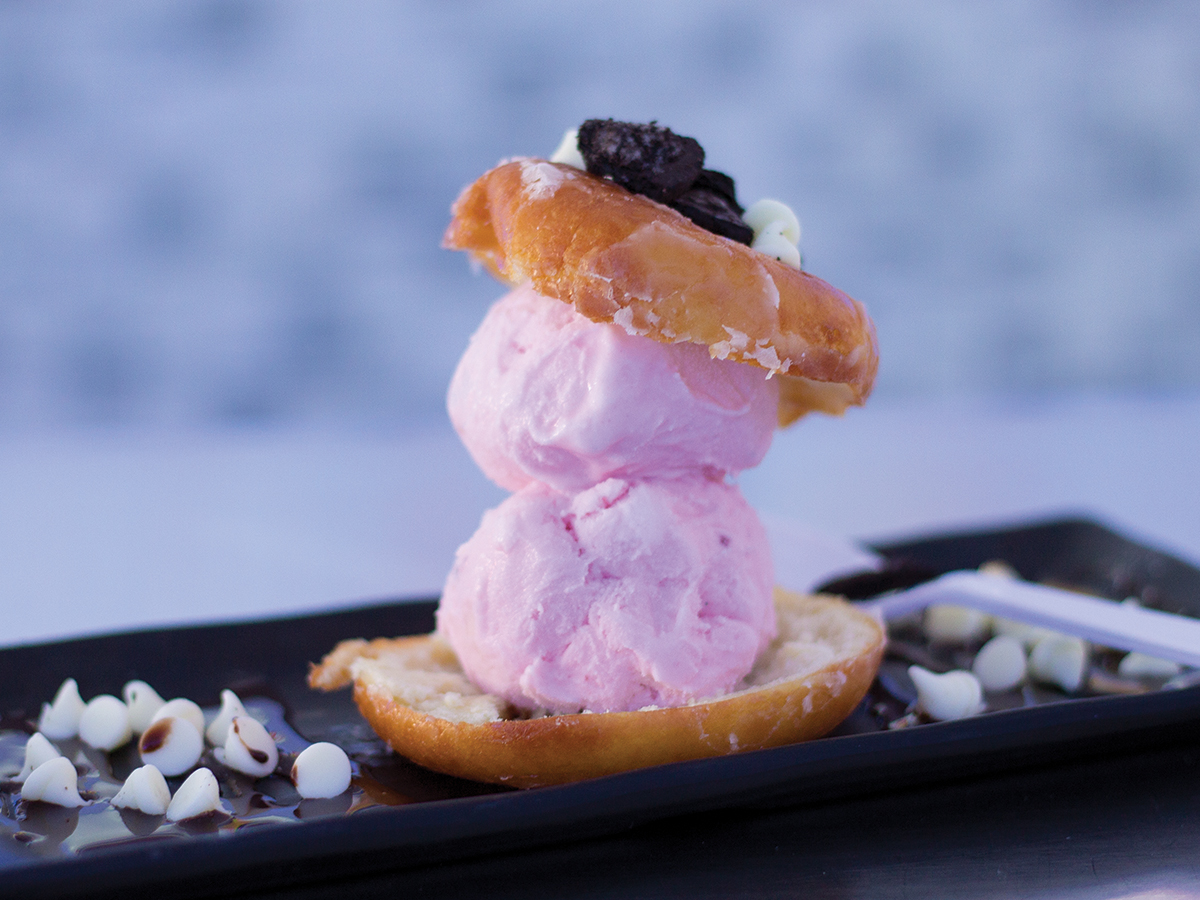 I have one word for this place and one word only: Overpriced. Snowopolis was plain overpriced for a joint that simply sells sweets and prettified sugar-things — all of which you can just buy from the dessert or frozen food section of your local grocery store. Sure, the place looks nice with its sea of colorful ball lights and clean, modern furnishings, but think of it this way: Visiting Snowopolis was like that moment when you unwrap the cute, sparkly wrapping paper that engulfs the mysterious present that your deceptive little brother packaged up for you on Christmas Eve, only to find that you are left with a plain brown box with nothing inside of it but air and disappointment.

Or, to use a more food-related example, eating at Snowopolis for the first time was like going to your grandma’s house and seeing that yummy box of Danish butter cookies sitting on her counter, only to open it up and find balls of yarn and sewing utensils instead of those much-anticipated vaniljekranse (Seriously, do those gosh-darn cookies even exist?).

… eating at Snowopolis for the first time was like going to your grandma’s house and seeing that yummy box of Danish butter cookies sitting on her counter, only to open it up and find balls of yarn and sewing utensils instead of those much-anticipated vaniljekranse …

Obviously, I had high hopes for the tantalizing and never-before-seen creations that Snowopolis had to offer based on its numerous grand opening ads on Facebook (it opened just this past August), but when I actually went there and tried at least one item from each of their five categories (Build-A-Cookie, Tableside S’mores, shaved ice, ice cream doughnut and gourmet shake), I quickly discovered that these were all things I could have simply made myself, with the exception of the shaved ice (but even some ice, a plastic baggie, a meat tenderizer mallet and some fruity syrup could somewhat salvage that idea). And plus, it probably only seemed exciting to me because I have no social life and never get to see those delightful dessert treats that my Instagram “friends” post of in real life.

Let’s get down to the specifics. We walked into the restaurant and were instantly greeted with … just kidding, you were probably expecting me to say something fantastical like it looked like there were flying jellyfish everywhere and the lights were prettier than an Aurora. Instead, I realized that the place didn’t look nearly as good as it did in the pictures, with the colors being dull and there actually not being as many decorations as they led me to believe (it was mainly just the lights that were “styling” the place up). However, this interpretation may have been one-sided since we were there during the daytime, when the natural sunlight interfered with the displays. I figured the colorful array of lights and glamor were probably in full-effect at night.

With observations of the atmosphere out of the way, it was time to move on to the important stuff: The desserts.

Behind the main counter was Adrianna Vasquez, a friendly and helpful cashier who informed us that, “Just because it’s called Snowopolis, people think all we have is shaved ice, but everything is almost all sold-out by the end of the night, so we don’t actually have any specific favorites from the customers.” With that being said, we decided to just order one item from each of the five different menus to see for ourselves if the food really was not just up to par but up to the stars as well.

The first thing we tried was the shaved ice (one of which was fruit punch and sour strawberry-flavored, the other being “Tiger’s Blood” and tropical-flavored), and it was the literal definition of a bad first impression. Immediately upon taking the first bite, I was met with nothing but a mouthful of ice and some sugary flavors, all of which were sorrowfully indistinguishable from one another. I would have gawked at the regular price of $4.99, not including tax, for a small dish of that ice, but thankfully we landed on one of their Snow Tuesdays, in which their shaved ice is only $1.50.

Hoping that the shaved ice wasn’t representative of the entire menu, we dove into the second item, which was an ice cream doughnut with a strawberry cheesecake ice cream filling. The treat as a whole wasn’t so bad, since it did have doughnut and ice cream in one. But for some reason, the doughnut itself tasted a lot drier and much less joyful than what I remember an authentic Krispy Kreme tasting like (perhaps because they get the doughnuts second-hand and therefore distill it from it’s famous fresh-out-of-the-oven policy … or perhaps due to the fact that the doughnuts were not actually Krispy Kreme at all). The strawberry cheesecake filling was just okay, even though, as fellow Features editor Ashley Chung commented, “The strawberry cheesecake ice cream was really just strawberry.”

After the sketchy ice cream-filled doughnut was reluctantly eaten and pushed aside, the next item on the plate was the Build-a-Cookie dish, which allows customers to select their own a cookie type, an ice cream flavor and two toppings. We chose chocolate chip cookie dough, cookies and cream ice cream, Ghirardelli caramel chunks and Nutella. It was pretty good since the cookie itself was not too mooshy and overall you just can’t go wrong with Ghirardelli chunks. But a better deal undoubtedly rests at BJ’s, where we could have ordered a Pizookie for only one dollar more (the Build-a-Cookie was $5.95 whereas a chocolate chunk Pizookie would have been $6.75) and had a legitimate cookie and ice cream dish, instead of the tiny tin of such that we were given at Snowopolis.

By the time we reached the S’morelicious gourmet shake, Ashley groaned, “My stomach hurts!” to which everyone at the table solemnly nodded their heads and stared at the menacing task in front of them: A gluten-filled, Nutella-lined, sugar-fully loaded, marshmallow-coated concoction of syrup, shame and Oreo milkshake. Each of us took one sip and never touched our straws again. It was a mutual understanding that the shake was nothing special and far less tasty than the friendlier-priced Oreo McFlurry at McDonald’s (The “gourmet” shake was a whopping $10.95 compared to the $2.39 of a regular McFlurry). And as for all of the sugary embellishments that sure made the S’morelicious shake look a lot more pleasant than it tasted — we didn’t even bother with any of that. On to the next and last dish.

Just when we thought we were done with s’mores, the Tableside S’mores arrived on a wooden platter, containing Hershey’s milk chocolate, fresh strawberries and bananas, cinnamon and plain graham crackers and marshmallows. Actually, that’s how we ordered it, but since they apparently ran out of Hershey’s milk chocolate bars (first question that came to my mind when they told us that: “How?”), they instead gave us some other random candies, such as Reese’s cups and Ghirardelli squares, and kindly gave us a few extras of these as well to be courteous. Initially we were fascinated by the platter because of the imitation firepit contraption at the center of the bowl, but that “flame” quickly died out after we sat there roasting our marshmallows and gradually began realizing that the whole thing was really not something we couldn’t have made in our own fireplaces or stoves. After all, every single ingredient that was on that plate came straight from the supermarket and the sole facet that held it up as a product was its eye-catching aesthetic, which was a concept that pretty much summed up my entire experience at Snowopolis.

… every single ingredient that was on that plate came straight from the supermarket and the sole facet that held it up as a product was its eye-catching aesthetic, which was a concept that pretty much summed up my entire experience at Snowopolis.

I must say — the customer service was nice, since the cashiers and servers were patient enough to explain items on the menu and even socialize casually with us for a bit. But nothing can conceal the mishap of unreasonably priced food, and hopefully that is something the owners will realize soon since they are a brand new establishment (although they also have a store in Montebello, which has been around since 2013 and is probably no less different).

So, if you like fun experiences and want to try a trendy new spot out here in the Inland Empire at the expense of worthwhile food, I would totally recommend Snowopolis for you. But if I cared enough to save you the roughly $40 (not including tax) price that we spent and wasted at that place, I would simply tell you to go to your nearest grocery store and appreciate everything that it has to offer before ever suggesting Snowopolis.