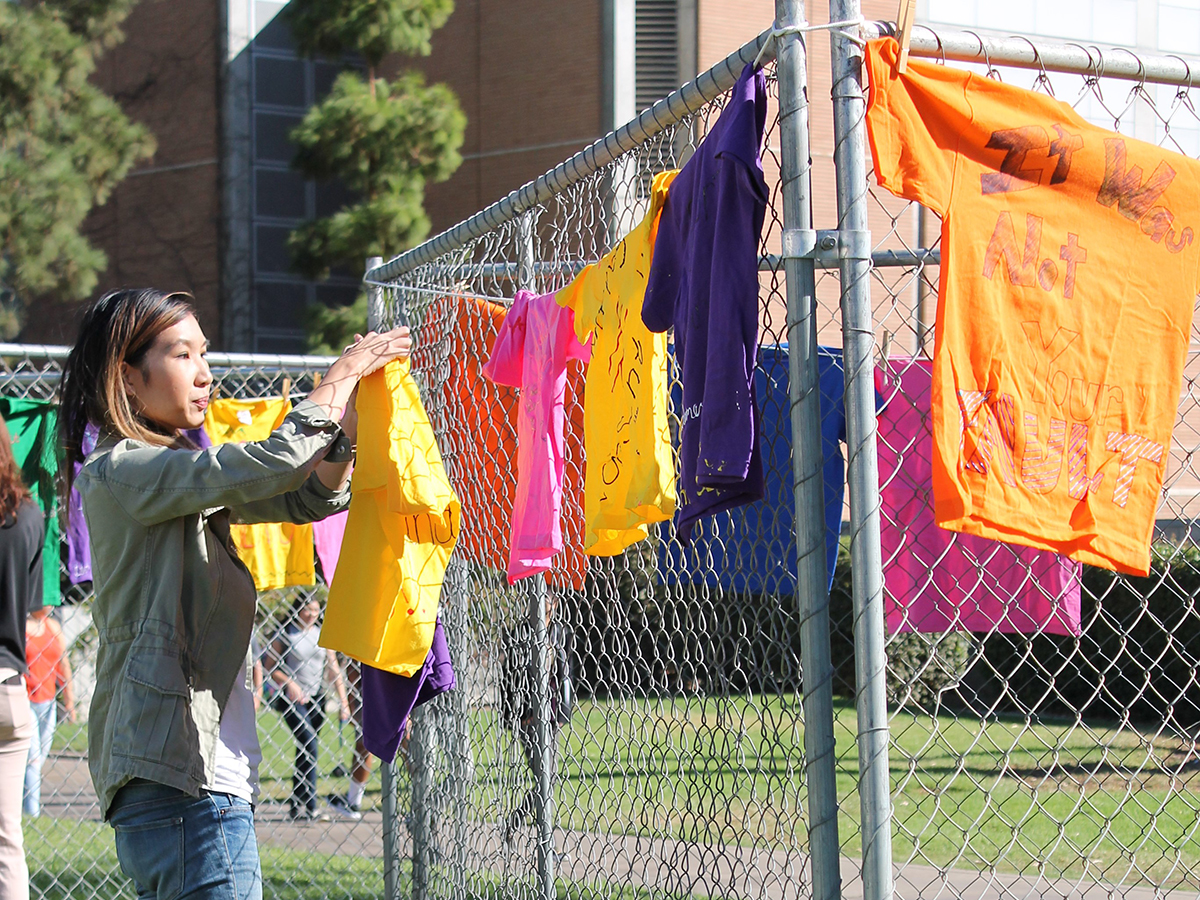 UCR students were greeted with a large display of freshly painted T-shirts all week long on the lawn by the HUB upper plaza as they rushed to and from their classes. Many slowed in passing or even halted to admire the impressive array that accumulated each day as they realized that this was not simply an exhibit of do-it-yourself (DIY) art, but rather a project bearing witness to the survivors and victims of the war against women.

The Clothesline Project was born out of a discovery in 1990 of 51,000 women found murdered by their intimate partners during the Vietnam War, which was comparable to the 58,000 soldiers found dead over the same span. This revelation led to the creation of the Clothesline Project as a group of women sought to “air society’s dirty laundry,” revealed Karla Noriega, second-year sociology major and volunteer for the Clothesline Project. Since beginning with a rather small demonstration of 31 T-shirts, the Clothesline Project has garnered worldwide attention as it rapidly expanded and began taking place in communities across the nation as well as in other countries.

The Clothesline Project was born out of a discovery in 1990 of 51,000 women found murdered by their intimate partners during the Vietnam War, which was comparable to the 58,000 soldiers found dead over the same span.

In honor of Domestic Violence Awareness Month, the movement was intended to educate on and bring widespread recognition to the effects of violence against women. UC Riverside has contributed to this mission since establishing their own Clothesline Project through the Women’s Resource Center (WRC) in 2001.

Nathaly Martinez, the program coordinator of the Women’s Resource Center, further emphasized the goal of the movement by explaining, “We can never pinpoint who a survivor is so this gives them a chance to have that voice that hasn’t been given to them before. It’s very important because it is an issue, even here on college campuses, and I feel like it’s something that needs to be talked about and something that more people need to be aware of. When you see the shirts and you see that there are survivors here on campus, it makes more of an impact.”

Martinez’s objective was readily received as many of the observers revealed that they were unaware of the astonishing statistics of women who face domestic violence prior to seeing this exhibit. They were oftentimes even more surprised to find that it is a reality that many women on most campuses encounter. One such passerbyer was first-year computer science major, Jorge Delgado.

“I never really thought about the extent of the problem of violence against women but having this visual set before me forces me to recognize that it was and is still a very relevant issue, even here at UCR. As much as it pains me to see this, I’m honestly glad that I took the time to stop by and read some of the T-shirts,” Delgado somberly stated.

While the Clothesline Project does educate and raise awareness of intimate partner violence, it also works to help with the healing process for those who have lost a loved one or are survivors of this brutality. Speaking on this, Martinez passionately expressed that “a lot of survivors find it hard for them to come out, especially survivors of domestic violence. This is a chance for them to give a statement for themselves and maybe a message to their traitors –– something to help them heal.”

It was more than just an exhibit honoring the survivors and victims; it was a model of a nationwide network of support and encouragement for people to take action. The Clothesline Project at UCR has thus made an exceptional impact in regards to honoring the women who have experienced any amount of violence by drawing out more allies and supporters against intimate partner violence.

Deeply impassioned by the display, first-year sociology major Jamie Nguyen voiced, “People think that they have no say and that they have no control over it. People mistake abuse for love. This is close to my heart because I’ve seen this with my own eyes.”

And that is exactly the reaction that the Clothesline Project intends to evoke. It acts as an unapologetic display of reality and a visual reminder of the discomforting facts and statistics that we often ignore, and most importantly, it gives each woman a voice to expose their unspeakable experiences.