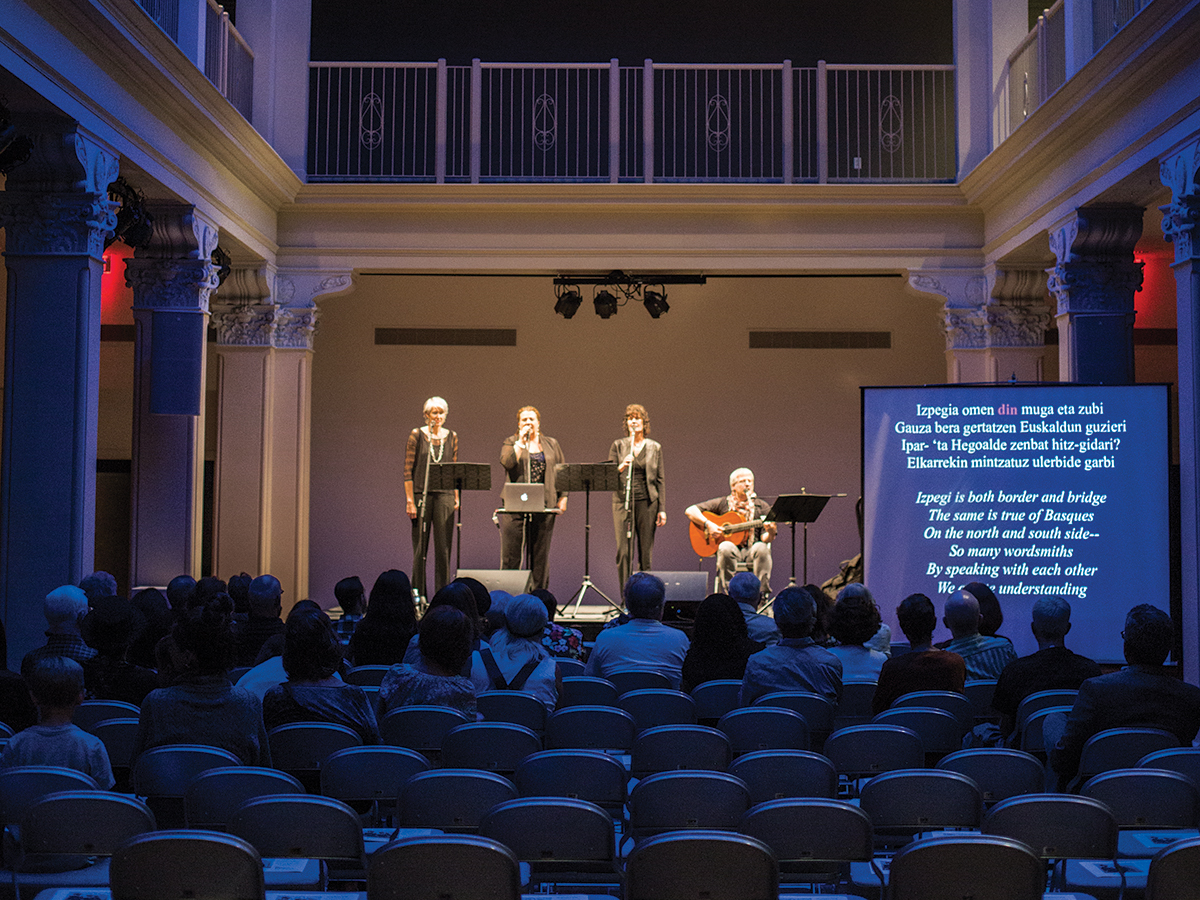 Along the quiet streets of downtown Riverside, Basque music flows from the Barbara and Art Culver Center of the Arts. This event, aptly titled, “Basque’ing Through Song,” showcases NOKA, a dynamic trio composed of Andrea Bidart, Begona Echeverria and Cathy Petrissans. Upon entering, my focus was pulled to the stage which was illuminated by soft, yellow lights from above. The space was white with dark words printed on the walls, evoking the feeling of being in a museum. A faint amount of blue-tinted light shined from the ceiling, directing the attention to NOKA.

For NOKA, the purpose of the evening was to bring more awareness to the Basque language and culture. The word “noka” in Basque means to speak familiarly to women that one trusts but over the years the term has vanished from the Basque language. Today only a handful of people still use the term. They chose NOKA because Basque songs are dominated by male protagonists with hardly any songs sung by women. As a result, their goal is to shed light on this lost aspect of the Basque language and thus all of their songs are sung in noka — “a unique, gendered grammatical form of speech,” as deemed by the Library of Congress. Although the group lives in Chino, their parents were proud immigrants of Basque Country, a term loosely used to describe four provinces in the north of Spain and three provinces in the south of France. Their dedication to preserving their culture through the use of their music was a common theme throughout the night as they doled out tidbits about Basque heritage in between musical numbers.

They began the event by introducing themselves to the small, but enthusiastic audience of about 50 members before delving into song. Their personalities were upbeat and it was clear the audience resonated with them, as indicated by the soft murmurs of laughter that arose when Echeverria would make sly jokes. A common theme among the songs was the marriage of a woman to a wealthier, older man. In the song “Saldu Nenduan,” the father chastises his young daughter for not marrying a man who he deems worthy because of his immense wealth. In turn, the daughter only wishes to follow her heart. The melody was light and airy and helped in lifting the audience’s mood. Although no one sang along at the singer’s request, one could feel the energy of the audience shift as the songs began. Accompanying the music was a projector screen complete with translations and humorous images of Hugh Hefner, alluding to the old man in the song.

A major storyline of many Basque songs consist of a man chasing after a beautiful woman. To counteract this antiquated storyline, NOKA attempted to counter this trend by writing their own song titled “Eye Candy.” The song playfully objectifies men while cleverly changing the narrative of traditional Basque music. Their lyrics represent the essence of the group’s delicate balance between the preservation and evolution of culture. The energy that they put forth was one that communicated the importance of breaking underlying gender roles set forth by society.
Throughout the night, I was touched by NOKA’s efforts to communicate the beauty of the Basque language to the public. Their commitment to sharing their culture is admirable and a lesson which would likely resonate with many children of immigrants.