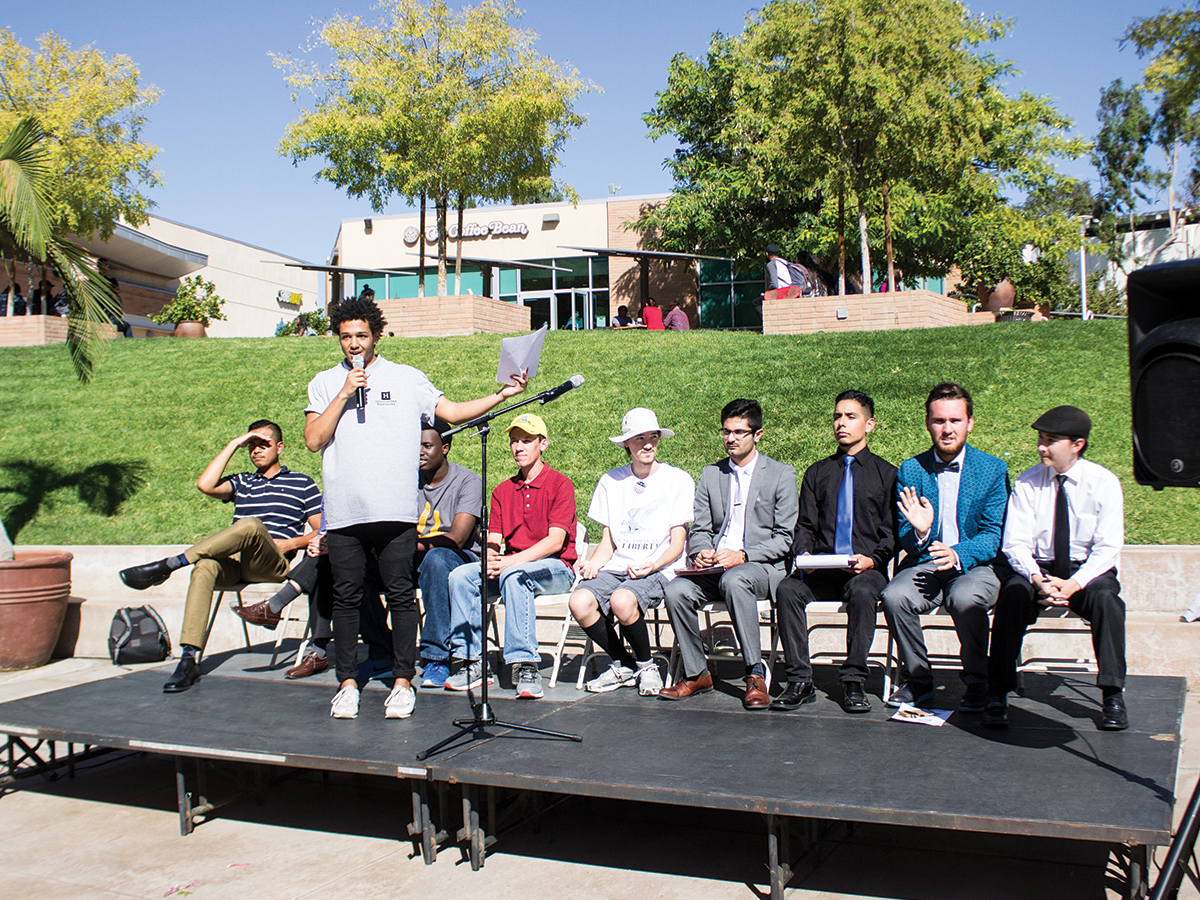 On Wednesday, Oct. 19 the Highlander, in conjunction with the Associated Students of UCR, hosted “The Debate at UCR” between the College Democrats of UCR, the College Republicans of UCR and the Young Americans for Liberty (YAL). The event kicked off at 2 p.m. at the HUB Plaza and offered a booth allowing students to register to vote before the Oct. 24 deadline.

The debate was moderated by Highlander Editor-in-Chief Myles Andrews-Duve, Opinions Editor Quinn Minten and Assistant News Editor Som Chaturvedi, and primarily revolved around the topics of gun control, immigration and education, with responses being limited to a minute for each speaker.

The debate commenced with the polarizing issue of guns and the Second Amendment. While there are currently minimal forms of gun regulation at the federal level, a majority of gun control legislation is issued at the state level. Considering this, as well as July’s tragic Orlando nightclub mass shooting, and the local San Bernardino shooting that killed 14 and injured 22 in December of 2015, the club representatives were asked about their views on the nation’s gun regulation policies, and what they would look to change within the current system.

College Republicans: With respect to the current gun control regulation policies, the College Republicans emphasized that the “issue at hand is enforcing the laws that are already in the books.” They highlighted the importance of the Second Amendment, which ensures the right to bear arms. The College Republicans also explained that many criminals already obtain guns through illegal means, and that issuing more gun control laws despite the tough gun control measures in place here in California would be inconsequential. Concerning the argument of limiting magazine sizes as a form of gun regulation, the College Republicans explained how there is already a limit of 12 rounds in any given magazine. And given this limitation that is already in place, the Republicans argued that any more rounds in a magazine would be illegal under current law. Furthermore, the speaker stressed the importance of education in fixing the current gun regulation policies. “I want to see education towards individuals who want to get handguns in terms of classes, to learn how to properly use and clean a weapon … education is critical concerning gun control, but limiting or banning the amount of bullets a gun can shoot doesn’t make sense in my mind.”

YAL: The speakers believed that people have the right to self-defense, and unless an individual forgoes that right through criminal acts, it needs to be protected above all else. With respect to changing the current laws for gun regulation, the speakers believe that, “instead of having arbitrary across the board measures, we would look to promote education on how to properly handle guns. We would also want to pass stand-your-ground laws. We need to promote a culture that condemns violence, but that promotes an individual’s right to self-defense.”

College Democrats: Highlighting the San Bernardino shootings, the College Democrats emphasized how the shooters had access to high capacity magazines. The speakers then went on to stress the importance of limiting the bullets a criminal has access to through initiatives like Proposition 63, a measure that would ban high capacity magazines. The Democrats further argued that even if there current are limitations on magazine capacities, one irresponsible gun owner could endanger the lives of others with just one magazine. So according to the speakers, “being able to reduce the amount of magazines that potentially irresponsible Americans can have access to can decrease the number of bullets available to accidentally discharge, and therefore increase the safety of Americans as a whole.” When further asked about the effectiveness of gun control and regulation through legislative processes, the Democrats brought up the example of Tennessee, a state that has relatively fewer gun control measures compared to states like California, which also has the “highest number of gun violence incidences per capita,” said the speaker. The Democrats also emphasized the continuation of background checks not only for firearms, but also for ammunition. They also stressed the importance of a “nationwide stance on gun control to prevent people from just purchasing guns where it’s easy and legal, and bringing them into states to commit crimes.”

Immigration has been a divisive issue in this year’s election. With the large numbers of illegal immigrants in the United States and the question of how the new president should handle this, representatives of each group were asked how they would fix the current system, secure the nation’s borders and protect the safety of U.S. citizens.

College Republicans: Regarding the 2.4 million illegal immigrants in America alone, the Republicans stated, “We are a nation of laws and we need to secure our borders.” While the speaker described himself as “pro-immigrant” and endorsed legal immigration, he stressed the importance of reforming the current process by which individuals enter the United States. In terms of fixing the current immigration policies, the speaker said, “I do believe the government needs to build a wall.” He also added that this measure would be the first step in securing the border. The “influx of illegal immigrants coming into this country has been rising for the past 10 to 20 years” needs to be addressed, explained the College Republicans. “We need to hold individuals in here illegally accountable and that includes getting rid of sanctuary cities that allow illegal immigrants to be deported, come back and not be held accountable by the law.”

YAL: The speaker on behalf of the Young Americans for Liberty concurred with the College Republicans’ stance on the current system of how we vet immigrants, saying “The way it is now, immigrants come up to a system where there is no way for them to get into this country.” The speaker also highlighted how the quota and visa system are restrictive and highly selective to the point where, if individuals don’t “have a family member here to sponsor you, then you might find there is no way for you to make it in.” Furthermore, the speaker also confronted the College Democrats by mentioning the large number of deportations under the Obama administration, saying “Obama has deported many, many, many immigrants and it’s a bit hypocritical. They’re arguing for a little more immigration, not opening our borders and more quotas and I don’t really see how that is a pro-immigration stance.”

College Democrats: The College Democrats strongly disagreed with the Republicans’ notion of building a wall around the United States. They emphasized that people immigrate to America in pursuit of a better life and to escape oppressive governments. According to the College Democrats, immigrants contribute greatly to our society. Their representative explained, “If you look at the statistics, the wages in the bottom 20 percent are from immigrants who contribute robustly to our economy. Some of these people are not bad people, of course there is a minority that are bad, but do we really need to build a wall? … We need to be a country where we help these people and bring them out of poverty so their future generations will help this country.” Their pro-immigration stance also extended to accepting refugees from war-torn nations, explaining that only a miniscule amount of immigrants have ever posed a terrorist threat to the country’s safety.

With the imminent expiration of the tuition freeze enacted by UC President Janet Napolitano and Gov. Jerry Brown set to expire this academic school year, there have been concerns about a possible reduction in the affordability and accessibility of higher education. In response to this, the organization representatives were asked to discuss their stance on how to reduce student debt, make college more affordable and increase access to higher education.

College Republicans: The group asserted that high interest rates and the current emphasis on humanities majors are the main culprits behind insurmountable student debts. According to them, our society’s current focus on a liberal arts education stigmatizes professions that take less training and are more physically demanding. They urged high school students to be practical in their higher education choices, and to not underestimate the value of trade professions. They support the idea of a low-cost college education, a reduced emphasis on liberal arts and more consideration of trade albeit menial labor. Their representative explained, “Students are not being given another perspective on how to pursue a better life for themselves and there’s no personal responsibility concerning financial planning when they go into college.”

College Democrats: The Democrats want to cut the interests rates on student loans and install a “Robin Hood tax” to help those who cannot afford a college education. By funneling money from the extremely wealthy, they ultimately hope to make college free for those who make less than $125,000 in accordance with Clinton’s plan for education. In response to the College Republicans’ assertion that a liberal arts education is unfairly prioritized, they emphasized the importance of choice. They believe that an individual should be able to choose whatever profession they want to choose, and that it is the government’s responsibility to provide them with the opportunities to do so. According to their representative, “We aren’t creating a society of worker ants, we’re creating a society of individuals capable of making their own educated decisions to do what they want with their lives.” Finally, they believe that by expanding affirmative action and Pell Grant distribution, they can increase accessibility to higher education.

YAL: The YAL expressed belief that enacting Robin Hood taxes to help fund education is a misguided policy because they don’t exclusively target the extremely wealthy. According to the organization, there still exists a large income disparity between the upper-middle class and top one percent that would make it extremely unfair to charge both classes the same amount for taxes, especially when they do not directly benefit from such an investment. However, they do agree with the College Democrats on the notion that interest rates on student loans should be reduced. They also argue that the process of acquiring loans for public universities is inherently corrupt. According to them, the government incentivizes public universities to spend more money in order to justify receiving a heftier allowance. “It even happens (here at) UCR — they spend money on the gym (in order to increase) the amount of money that the government gives them … the thing is, students get left with the loans — the schools have already received the money. They don’t care if the students are able to pay it back or not,” they elaborated.

To end the debate, a few toss-up topics were presented to each organization before they were each allowed to make a two-minute closing statement summarizing their core philosophies and what their respective clubs stand for. During the event, the total number of students that registered to vote was tallied to be at 63, according to former Student Organized Voter Access Committee Director Casey Thielhart.