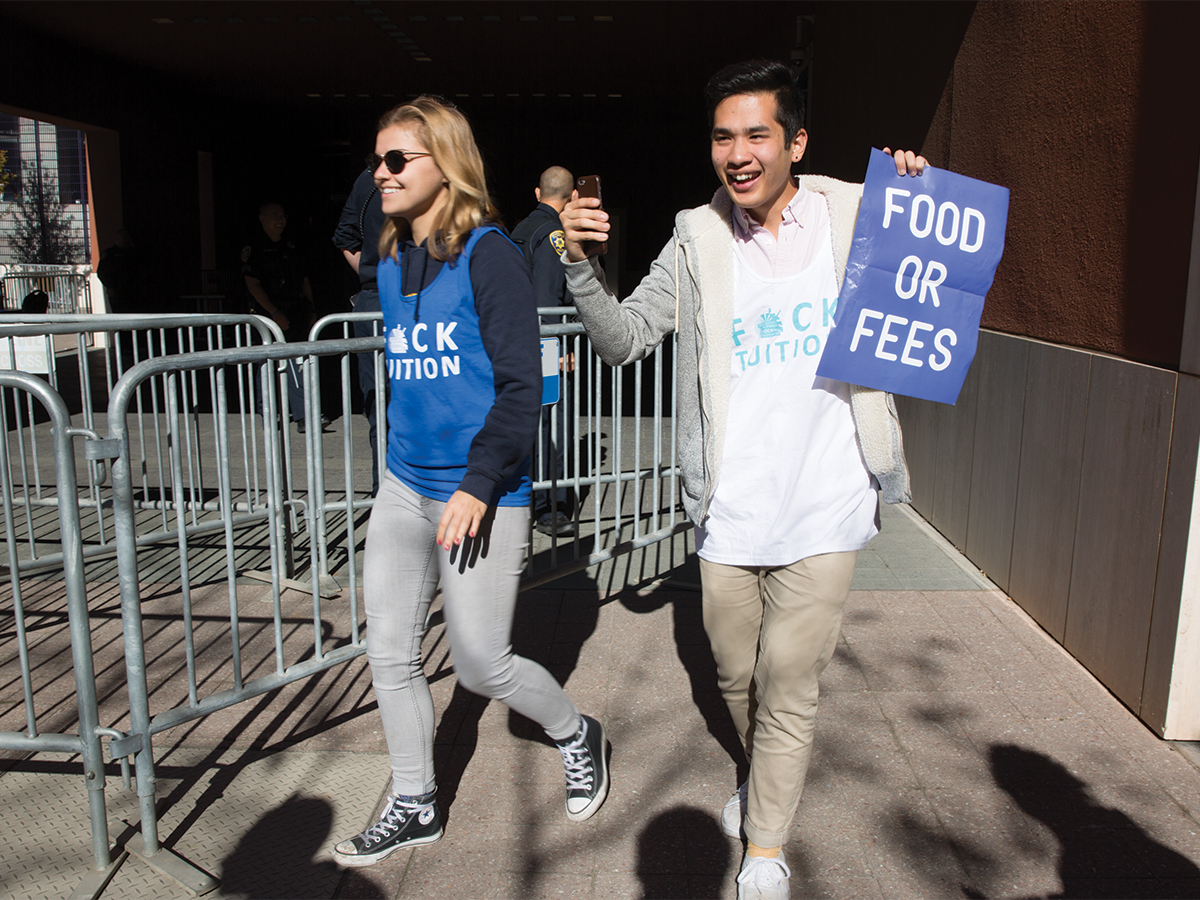 SAN FRANCISCO — The University of California is facing a significant transitional period come Jan. 1, 2017. That day, as of time of writing, is expected to mark the first time in six years that UC and Cal State campuses will raise the tuition cost of students attending and incoming.

The expected numbers for the tuition rise are as follows: $280 per UC and $270 per Cal State student with an up to five percent increase in ensuing academic years. The rise in tuition is in an effort to accommodate the growing amount of admissions, the UC Board of Regents say.

Yet this effort has drawn critique from circles and particularly students who are already finding it difficult to meet the current record-high tuition rates across UC and Cal State campuses. And on Thursday, Nov. 17 a total of around 80 students from UC Riverside, Berkeley, Santa Barbara and San Diego arrived at UC San Francisco to directly vocalize their concerns by protesting the forthcoming hikes at the final UC Regents meeting of the year.

Beginning around 8 a.m., student protesters began marching around the driveway in front of the UC San Francisco Mission Bay Conference Center in the form of a “human chain,” repeating chants such as “Hey hey, ho-ho, tuition hikes have got to go!”

Around 10 a.m. protesters, many holding anti-tuition hike signs, began to filter into the meeting during the regents’ discussion, with signs ranging from simply, “FUND THE UC” to “#YearOfTheRollback No Hikes, No Fees Lower tuition at UC!” Some of the students had come from hours away, including a group of around 30 from UCR, all to show their opposition to the anticipated hikes.

During a presentation discussing how to maintain student access to financial aid in the UC, Regent John A. Perez advocated in favor of fostering educational opportunity to students, soliciting cheers from the crowd.

When Regent Norman Pattiz spoke about the necessity of raising tuition, despite it being something “that nobody ever wants to do,” protesters began to chime in, drowning out his comments. “Look at how you allocate your funds!” a protester shouted. The discussion continued, with protesters becoming more vocal as the meeting endured, especially when Vice Chair Bonnie Reiss threatened for the meeting to be discontinued.

After continuous chanting by protesters, Reiss called for order and issued a warning to close the meeting. Student Regent Marcela Ramirez of UCR encouraged students to reach out to her via social media and share their anxieties with her, of which she promised to bring forth to the board. Perez attempted to mediate between the protesters and Reiss, by calling for another public forum to allow students’ concerns to be heard, after missing public forum earlier that morning. After ongoing interruptions by protesters, Reiss ended the meeting and ordered police to clear the room.

UCSF Police Captain Jim Brock declared the meeting an unlawful assembly and ordered the protesters to disperse within five minutes to avoid arrest. Following more encouragement from Ramirez that students move outside in order for her, Perez and Student Regent Paul Monge of UC Berkeley to immediately listen to their concerns, protesters began chanting, “Whose university? Our university!” as they moved outside to occupy the main entrance at the bottom floor of the UCSF conference center.* The protesters held a sit-in before being addressed by Perez who conversed with students and listened to a number of individual concerns, preceding the protesters’ dispersal from the building. Prior to this, Perez met with protesters who had already made their way outside the building and emphasized that he does not endorse the raising of tuition. The meeting was later continued and concluded around 3 p.m.

After the scene calmed, the Highlander spoke with protester Juniper Cordova-Goff, a third-year transfer student and political science major at Cal. “Regarding the reactions (from the regents), I’m not shocked. I didn’t really expect open communication from folks who have historically not really wanted communication from students,” shared Cordova-Goff. “It’s definitely upsetting and emotionally exhausting to be reminded of the fact that people who represent us aren’t doing a good job and don’t really want to change their ways, knowing that would impact people in power.”

The Board of Regents are expected to discuss the tuition increases at their January meeting during which the 2017-18 UC budget will be presented. Protesters assert that they will continue to mobilize until their demands are met by the board.

*This sentence differs slightly from the original print version after editing for factual clarity. (11/28/16)