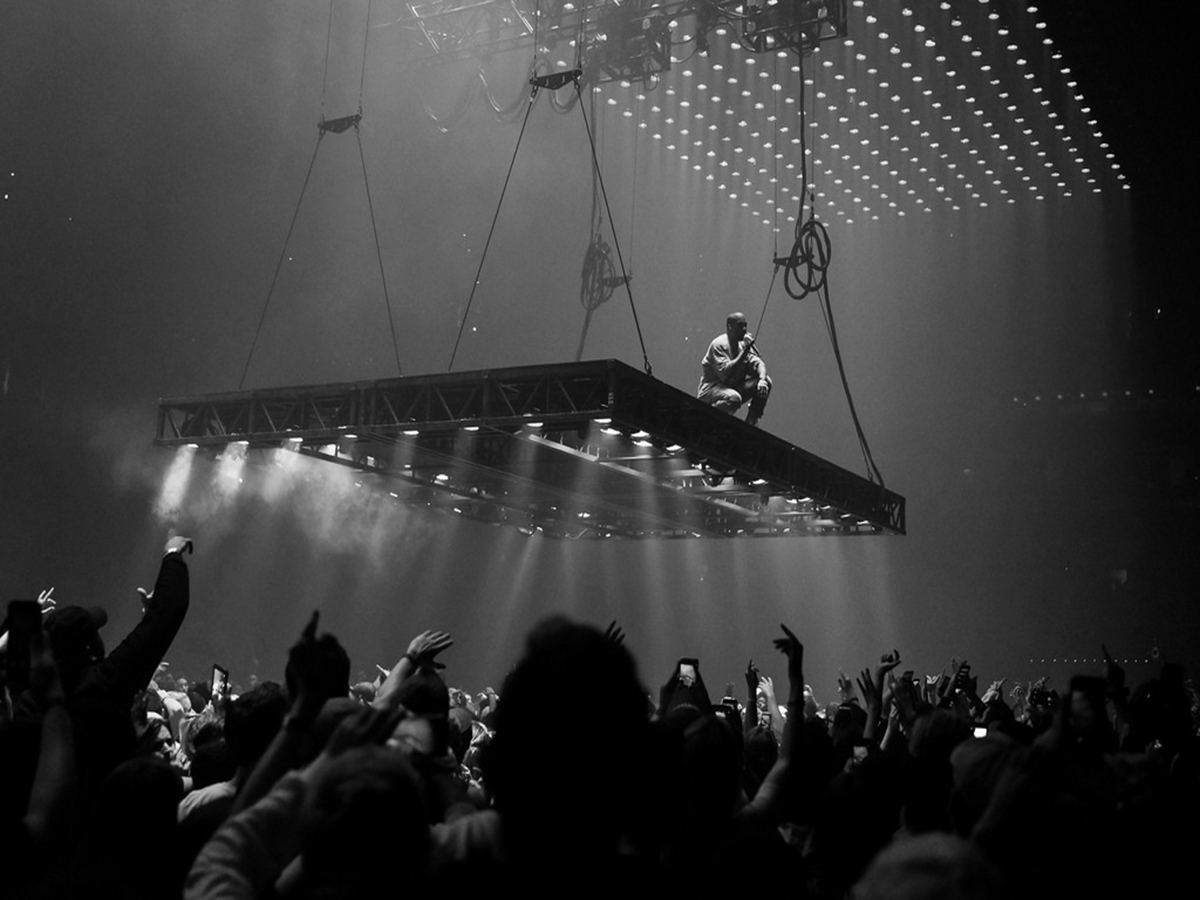 The outside of The Forum was adorned with Saint Pablo Tour banners, with one reading “6 nights sold out” with the six patched on the banner signaling the fact that the early November dates had just been added to the tour due to high demand for tickets. The outside of the venue was crowded with radio station booths, merchandise booths, reporters and thousands of fans creating and living in the center of the hip-hop culture in Los Angeles for the night. Preceding the performance, the main arena of the forum was filled with smoke, lit with only dark, amber-colored lights, mimicking that which gleams off of a bar of gold in Fort Knox. Chants of “Yeezy! Yeezy! Yeezy!” continued to grow louder as the ground level and surrounding stadium seats fill with people of all ages, backgrounds and ethnicities all there to see the man who has come to define the rap and hip-hop culture of the 21st century, Kanye West.

With no openers, only ambient chords played which created an eerie atmosphere that brought about the feeling of something coming, something big. This energy was mimicked in the quiet, nervous anticipation of the crowd as the building began to fill with bodies. Kanye finally came out about an hour and a half after the doors opened, and the building erupted. The arena was so foggy at this point from the smoke machines around the arena that it became difficult to see more than 50 feet in front of me and the eclectic crowd of hypebeasts and die-hard Kanye fans, that had been sitting down, calmly conversing, was now a mass of roaring energy that made the arena itself shake as “Father I Stretch My Hands Out” by Pastor T.L Barrett played. This cued for the man himself to stand above his audience waiting for “Father Stretch my Hands Pt.1” to drop as a welcome to his guests. The stage that was once hanging low at the far side of the arena began to rise, and even more smoke began to flow out of it as he seemed to appear out of absolutely nowhere. The enormous, gravity defying stage soon began to move, as people on the floor began tripping over each other chasing after the lights emanating from under it. The show went on for about two hours, with Kanye playing hit after hit, as the stage moved from one side of the arena to the other, making sure that no spot could be considered a bad one.

The iconic stage moved across the arena as “Power” played, and turned itself into a more traditional-looking stage as lights moved overhead and positioned themselves on each side of Kanye for “Wolves” and “Heartless.” The extremely diverse crowd of people created a scene resembling a house party, with the youngest most excited fans gravitating toward the middle of the floor, leading to huge mosh pits that moved perpetually throughout the show along with the stage. As I grew weary battling in the mosh pit to songs like “Don’t Like” and “All Day,” I stepped back and explored the rest of the crowd, only to find a completely different, more relaxed lets-only-have-a-couple-drinks-and-sit-back-and-enjoy-this-spectacle type of vibe in the further outskirts of the floor area. Here I found an older, more refined group dancing to “Touch the Sky” and putting their arms around each other holding back tears for songs like “Only One,” and simply standing in amazement during songs like “Flashing Lights.” The show was a once-in-a-lifetime experience that not only made my year complete, but also put into perspective the impact of Kanye West as an icon — a master of the live rap performance who knows how to get the best out of every audience.

West’s ability to move the crowd to dozens of anthems that he is behind from his feature on 2016’s “That Part” to the 2007 mega-hit “Stronger” is still as apparent as ever, even at the age of 39. While many of his counterparts at his age are struggling to maintain relevancy at this point in their careers, West is some how able to captivate people from the ages of 16 to those entering their early 50s. Perhaps it is the group of younger artists he has kept around him such as Chance the Rapper, Young Thug and Travis Scott, or maybe it’s just a testament to ‘Ye as a mastermind who has grown to become somewhat of a Paul Mccartney or Mick Jagger of rap: An artist who doesn’t allow age to deter their ability to sell out a house and give showgoers the night of their lives. The simplicity of the Saint Pablo set design lends itself to West’s genius. With its dangerous, cutting-edge stage that floats above the crowd’s heads and its plethora of amber lighting that sets the scene, Kanye makes sure the attention is toward the music, him and nothing else, something entirely different from the spectacles that were the Yeezus tour, where he had a diamond encrusted mask that was removed by Jesus Christ in front of a mountain, and the Glow in the Dark tour which portrayed him descending to earth from a spaceship with a set list that matched up with the visual concept respectively.

Selling out The Forum six nights in a row in a city that has more options for entertainment than anywhere else in the world is a feat very few can pull off, putting ‘Ye with the likes of artists such as Elvis Presley, Barbra Streisand, Led Zeppelin and the Rolling Stones to name a few of the biggest names in music history who have sold out multiple nights at the storied venue (Led Zeppelin played it a total of 16 times and sold it out 6 times in 1977.) The legacy of live performances Mr. West has left behind in the wake of his Saint Pablo tour after the legendary Glow in the Dark and Yeezus tours is impeccable, and is part of the reason that rap has gone from a genre of gangsters and underground listeners to arguably the most listened to and most important genre of American music. This aesthetically simple, yet very technically skilled and ambitious show that is the Saint Pablo Tour is an experience that I’m glad to have walked away with. It is a tour unlike any other that envelops the showgoers into the experience and will be known as one of the greatest album tours in hip-hop history without question. With only two remaining Southern California dates on the Saint Pablo Tour, as well as one stop in San Jose and one in Fresno, any fan of Kanye’s music should rush to see this tour, especially considering all the dates that he has added for his West Coast fan base. After all, Kanye is 39, who knows how many albums and tours the father of two has left.