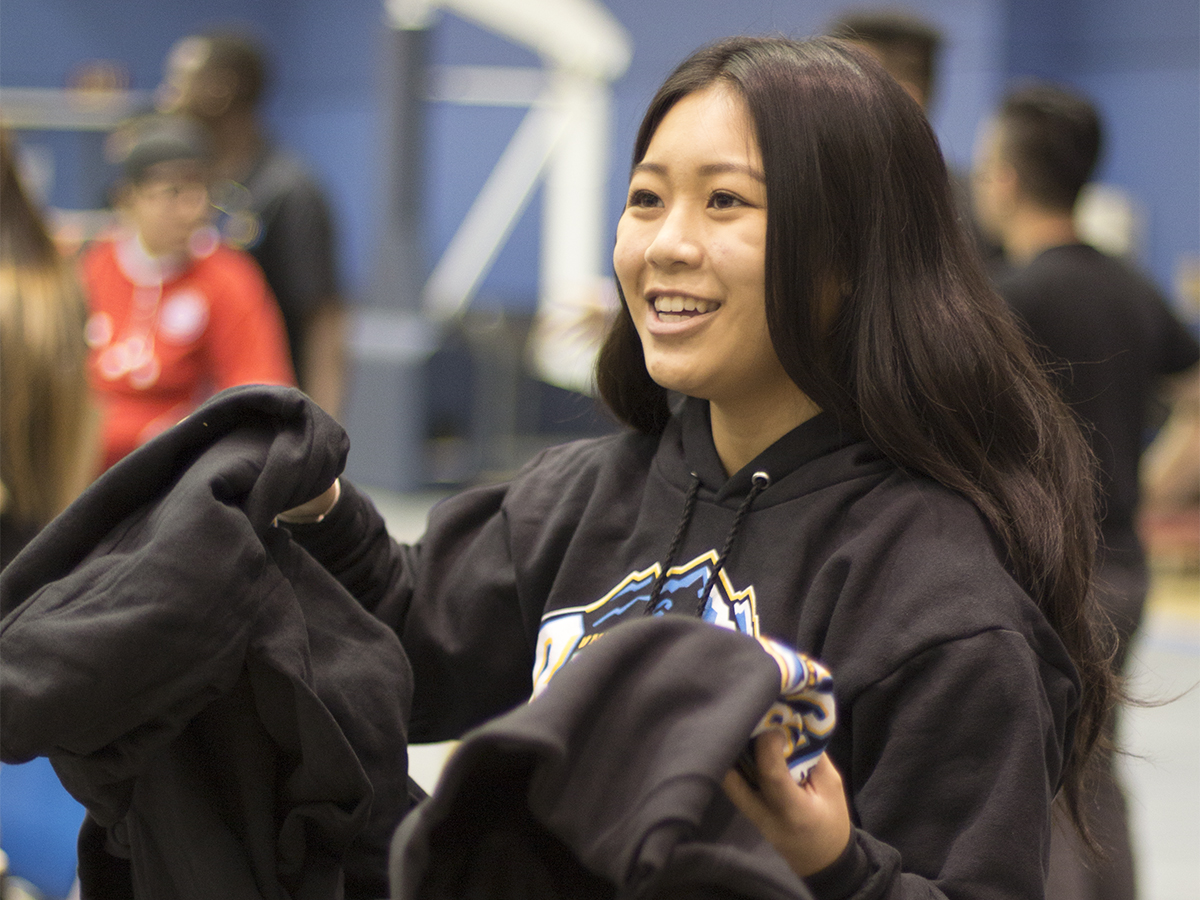 An initiative first started by 2014-15 ASUCR President Nafi Karim to “increase campus pride,” R’Gear, now considered a UC Riverside tradition, has continued into its third consecutive year. Students hoping to “get this symbolic R’Gear to rep Highlander Pride” were required to follow ASUCR on Instagram and like their page on Facebook, make a post on a social media site using certain hashtags and fill out a form through Google Sheets.

As precedented in past years, freshmen received priority in receiving their crewnecks and hoodies, with their window to obtain one taking place on Thursday, Jan. 19 from 5:30 p.m. to 8 p.m at the SRC. Prior to the official launch, a line of students wrapped around the outdoor excursions course, out to Linden Street. Planned distribution to all other classes of students took place from Monday, Jan. 23 to Friday, Jan. 27 from 12 p.m. to 5 p.m. at the Bear’s Den, with an even longer line extending from around the HUB, almost to the Arts Building. According to ASUCR Vice President of Finance Kevin Tseng, the supply of crewnecks and hoodies were exhausted by the second day that distribution was open to all classes.

When asked about how R’Gear generates pride amongst UCR students, Tseng elaborated on his personal experiences with school pride on campus and the increasing amount of students that seem to display newly found pride with these R’Gear items. “The way I view it is, when I initially came here as a freshman, I didn’t necessarily have the most pride. I didn’t see a lot of students coming in wearing UCR gear and being extremely prideful in the university, but I can kind of see the culture shifting now that I’m a fourth year,” Tseng elucidated.

For the first time since the inception of the program, students were offered the option of choosing between a black crewneck or hoodie, each with a UCR logo design across the chest. Another notable change was that to the budget, with an expected $51,818.40 to be spent on the initiative, a realized actual expenditure of $48,902.40. Additionally, the budget experienced an increase by $18,173.52 from the $30,728.88 spent on the initiative last year. The budget was used to purchase 6,100 crewnecks and hoodies from Progressive Graphics, with an average cost of around $8 per unit.

When asked about the reason for raising the R’Gear budget, on-leave President Shafi Karim noted that through a poll that he conducted, a high percentage of students voted in favor of continuing R’Gear. The poll voted on by students, however, failed to mention any of the monetary elements associated with R’Gear.

Even if this initiative is what students wanted, as the poll suggests, there remains a legitimate question of how informed the student body was when expressing these wants. After a review of the ASUCR website, it is difficult to find clear information on R’Gear funding, despite student fees funding the entire project. Public information on the R’Gear budget this year can only be found in the meeting minutes for fall 2016 finance budget hearing #5 and senate meeting #3.

Additionally, after speaking with freshmen students in line for their crewnecks and hoodies, few had an idea of how much money was put behind the initiative. Many also were unaware of how students fees paid to ASUCR could be spent, with some saying that they felt the money could be used to fix classrooms or hire faculty members.

“I think people should have the option of buying things. I don’t think it should be required for them to pay extra money on top of everything else that they’re paying. In order to have UCR gear I think … UCR gear is always good at any college … it’s good to promote spirit … but I think it’s negative for them to have us pay … when it’s not our choice,” said Carlin Smart, a first-year biology major.

Third-year media and cultural studies student Celeste Huang, who volunteered for the event, expressed approval of the spending, stating, “It seems like a lot, but we still have a lot of students contributing into this initiative, so I don’t think this is a problem at all.”

Shafi justified the increase on the premise of being able to impact a large number of students, saying, “We’re impacting about 6,100 students for $8. And whereas, let’s say, with other things like, you could compare, concerts, or things like that. You know you’re spending about, let’s say, last year’s Spring Splash. I think it is a great event, do not get me wrong. But for each student, there was around 10,000 students who went, and we spent about $50 per student.”

Another element of R’Gear called into question was whether or not the crewnecks and hoodies were made exclusively sweatshop free. Shafi reassured that UCOP had certain requirements in place disallowing products like these to be distributed if they had involved sweatshop labor. “We can’t purchase offseas, we have to purchase from a vendor from the U.S., and we have to meet the UC policy, and this is the same company that we have ordered from before that guaranteed us that it is sweatshop free,” Shafi elaborated, also mentioning that he could provide certification if asked.

*Editor’s Note: Since its publication, addition of the total amount spent on R’Gear last year has been added to this article.