Welcome to our second Ops Top 10! This time around, we feature our choices for the top 10 dog breeds from around the world. We rated these breeds on a variety of factors, which obviously included how cute they are, as well as how practical they are here in Southern California and how good they are as watchdogs. After untold hours of looking up dogs on Google and all kinds of extremely difficult deliberation (because unfortunately we can only choose 10), we came up with the following list. We hope you enjoy it.

1) German Shepherd: German shepherds are probably the face of America; they are extremely smart, friendly and just an all-around practical dog. Not only are they loyal and loveable pets, they are also amazing police dogs aka the K9. This means that they will be a great watchdog for you and your loved ones. Some people might be afraid of them because they are police dogs, but let me tell ya, I personally own a German shepherd mix and she is nothing but a sweetheart who has such a playful and fun personality. Oh, and if you are not convinced — just look at the ratings, who is numero uno? German shepherds are! –Jaspery Goh, Assistant Photo Editor

2) Golden Retriever: Golden retrievers are the quintessential smiling and happy dogs of the bunch. Known for being a friendly dog that is cordial with kids and adults alike, golden retrievers also have the ability to be vicious, making it a dog suitable for being a watchdog as well. While retrievers may not be the fluffiest of dogs, it’s their affectionate gaze and overall desire to cuddle and spend time with you that make golden retrievers one of the most popular dogs in America. –Christian May-Suzuki, Assistant Sports Editor

3) Siberian Husky: I’ve never had a husky, but I’ve always wanted one. Here in California they might not be the most practical breed to own, on account of their heavy coat, and yet, they make up for it in so many ways. They are more than just cutesy dogs, they are simultaneously beautiful and serious, which can’t be said for every dog breed. They are loyal animals — loyal enough that they can be counted on to do hard work, most iconically including their use as sled dogs. After all, the dog Balto, which made the original lifesaving run to Nome, Alaska that we commemorate with the Iditarod sled race, was a Siberian husky. I defy you to come up with a more important real-life dog, and I defy you to name a better breed than the Siberian husky. –Quinn Minten, Opinions Editor 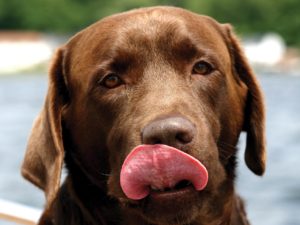 4) Labrador Retriever: Labrador retrievers are one of those breeds that seems to have the genes for big personalities embedded in their DNA. Whether they’re being totally dorky or demanding your attention, they are always standout characters. A friend of mine used to have a lab, and that dog was such a card; she was always enthusiastic to see me, probably more than she would be to see my friend or his family. And that dog could always bring a smile to my face. Perhaps that’s why labs are a top choice for seeing eye dogs and other helping dogs — they can be counted on to do their job of making someone’s life better. –Quinn Minten, Opinions Editor

5) Pembroke Welsh Corgi: Pembroke Welsh corgis are the perfect blend of fierce and cute. They’re an ancient herding breed, so they’re obviously reliable and strong. Their pudgy legs, long body and large ears are reminiscent of a dwarf. Looking at them, they seem like some sort of mythical creature. Corgis are so beloved that there are beach days held just to commemorate their existence, and hundreds of people (even those without corgis of their own) come just to bask in their adorableness. Also, they’re so fluffy their butts float in water. Three words: That booty tho. –Betteena Marco, Assistant Opinions Editor

6) Border Collie: Border collies have one of the most fundamental adorable traits a dog needs: Fluffiness in the front, playfulness in the back. Granted, not all collie owners groom theirs with the tuft of fluffy fur in the front only, but those people are wrong! My childhood dog was the epitome of a mutt, but he definitely had collie in him, which made him sometimes too clever for a dog. Collies may not have the strong meme presence that other breeds have but they more than make up for it with overall cuddliness, playfulness and cleverness. Oh, and let’s not forget, Lassie was a collie, and she saved Timmy from that well hundreds of times. –Jon Hammond, Sports Editor

7) Samoyed: Samoyeds, or sami’s as many people like to call them, are the floofiest dogs you will ever meet. They are so floofy you cannot even consider them a dog, they are more like living and breathing clouds. Having a bad day? Just go pet a Samoyed, or if one is not close by you, go look up some photos of them. How can you look at that dog and not smile? Want to impress your significant other? Nothing like showing up to a first date with a joyous bundle of fur. However, they are not the best watchdog and may not be too practical because of the floof to body ratio causing them to potentially get hot too quickly in the Riverside heat. But, their loving and pure personality with their cute faces and head tilts will have you wishing you had a big ball of floof to cuddle up with. –Jaspery Goh, Assistant Photo Editor

8) Shiba Inu: In terms of popularity, shiba inus definitely take the cake. Dogs of this breed have frequently become internet sensations (Doge and Mari the Mean Shiba Inu, anyone?) It’s not a surprise — they’re beautiful, expressive dogs with inquisitive little faces and cloud-like tails. They’re also relatively low maintenance since they groom and clean themselves. As one of the most ancient hunting breeds, they are undoubtedly good protectors. Ever heard of “A Tale of Mari and Three Puppies?” It’s a movie based on the true story of a shiba named Mari, who nursed for her elderly owner and puppies when they became trapped in their home after an earthquake. Her owner was eventually rescued, but he probably would not have survived without Mari’s help. Eat that, “Marley and Me.” –Betteena Marco, Assistant Opinions Editor

9) Daschund: I love dachshunds because of how smart and funny they are. I remember my dachshund, Weenie, (yes, I’m serious) and how she would lay on my chest, get the newspaper for my grandma, chase the cat around the dining room and dig gophers out of the ground and leave them on our patio. I mean what other breed is cool enough to be named after a hotdog? –Evan Ismail, Assistant News Editor

10) Scottish terrier: What’s not to love about this adorable dog? Not only does this dog make it into many memorable films like Walt Disney’s “Lady and the Tramp,” but it has also landed the role as UCR’s original mascot. The original mascot, named Lady Mac Tavish of Walpole aka “Buttons,” was voted to be UCR’s original mascot between the years of 1955-1959 before switching to a Highlander bear. During her years on campus, she attended almost every single sports game even as a beacon of school pride. Today “Buttons” has been lost in the shadow of our current mascot, but the adorable cuteness of Buttons the Scottish terrier will forever live on in our hearts. –Jacob Gonzalez, Marketing Coordinator