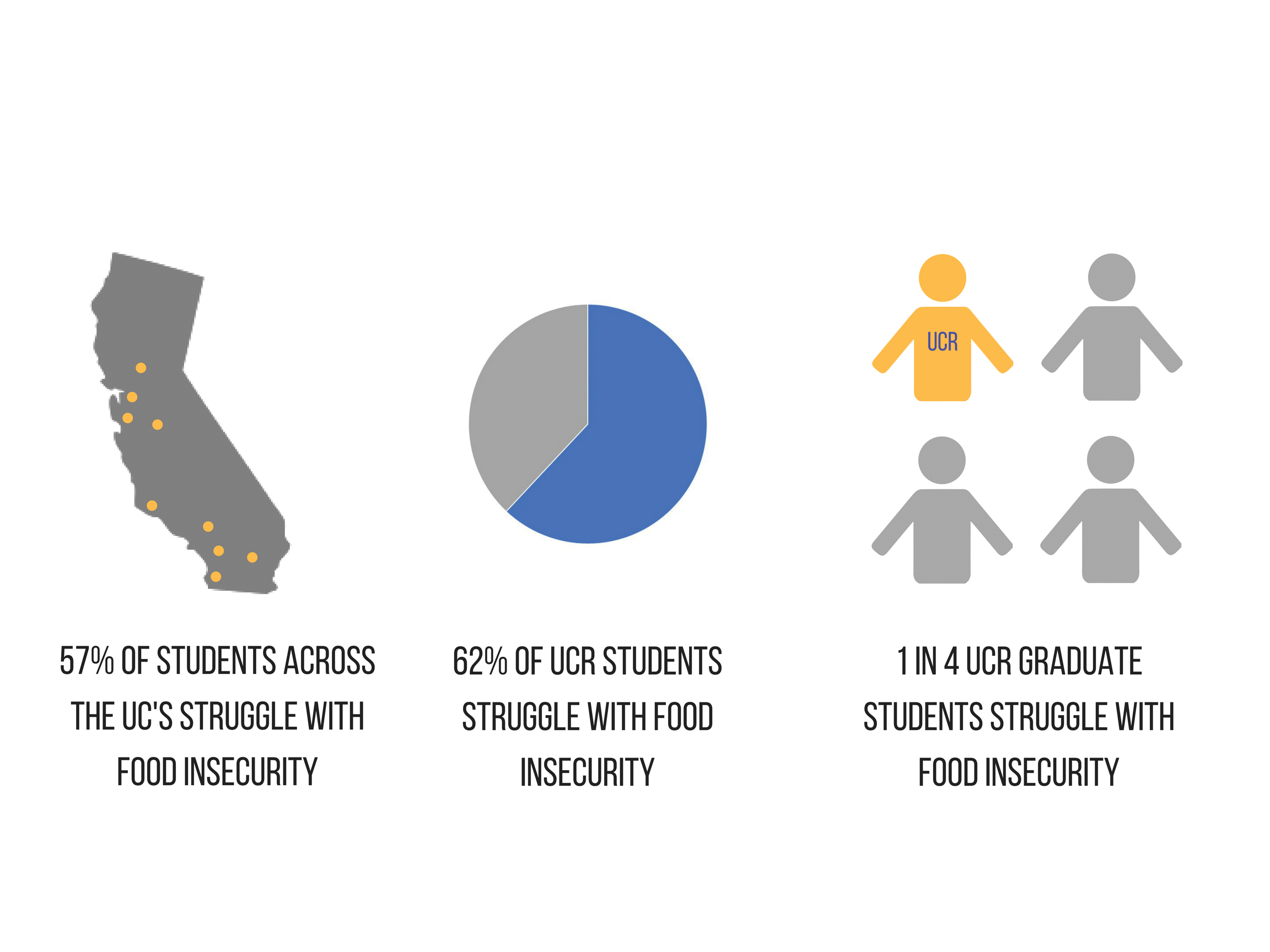 In July of 2016, the UC Student Food Access and Security Study reported a 25 percent food insecurity rate among graduate students. Ragan attributed this to the diversity on campus, explaining, “UCR prides itself on its admissions of minority students, low income students … and UCR, among the UC’s, has the highest number of Pell Grant recipients.”

Maynton then discussed the fact that the graduate population is composed of not only a large number of international students but graduate students who are married and have families.

Maynton believes that the breakdown among graduate students is much more broad than the study’s rate suggests explaining that food insecurity, in her view, would be higher in the College of Humanities, Arts and Social Sciences (CHASS) since they do not have access to grants such as National Science Foundation fellowships and go without funding throughout the summer. She question the 25 percent rating, saying, “Grad students in the arts and humanities have very different funding cycles and streams than students, say, in engineering and natural sciences which tend to get more fellowship money for their degrees.”

Natividad also mentioned that, according to the Graduate Student Well-Being Survey, which has not yet been released to the public, there are differing levels of food insecurity within advancing academic rungs. “Those who have not advanced to candidacy in their doctoral program are more likely to be food insecure as well,” stated Natividad.

Food insecurity also plays a greater role in a graduate student’s completion of their doctoral program. Natividad explained how, as a public policy student pursuing a professional master’s degree, students in his programs rarely receive grants and scholarships from both the school and department. Natividad believes that this type of limited access to funds can affect which academic path graduate students take, saying, “Another layer of it is what are the graduate students achieving within their academic path?” Ragan, building on Natividad’s point, mentioned colleagues of his who have had to take out second, full-time jobs to cover expenses which has slowed down their path toward finishing their program. This slows down the normative time to degree completion which then “they have holds put on, they have to complete timetables to completion, so there’s all these other bureaucratic steps they have to go through because they’re having to work outside what the university’s providing because it’s not enough.”

Maynton, Natividad and Ragan are in consensus that there is a stigma surrounding the issue of food insecurity. Maynton attributed it to the embarrassment of “some degree to have to ask for assistance … you see people who are around you who are apparently figuring it out so why can’t you?” She continued, “I think this is especially true for the graduate student population … You don’t want to admit that you’re struggling just because it kind of seems like you’re asking for something from someone.” Maynton encourages people to step forward and have a conversation about food insecurity. Maynton went on to say that since this problem is so widespread, those struggling are not going through it alone.

Natividad suggested that asking for help would be easier if programs like CalFresh were easier for students to apply for. Natividad described CalFresh regulations as “Byzantine, there are so many requirements you have to meet and … as grad students, we have so many things on our plate, so having to navigate the county registry … is inconvenient.” Maynton suggested that streamlining the application process for food aid like CalFresh is something the university could work on to make aid easier for students to access.

The GSA represents graduate students at UCR by providing travel and conference grants to graduate students and advocacy for on-campus graduate needs. The GSA operates a food pantry for graduate students in the University Office Building on Thursdays from 1-3 p.m. The GSA Basic Needs Committee meets the first Wednesday of every month October through June in HUB 355 where they discuss food, housing and mental health.