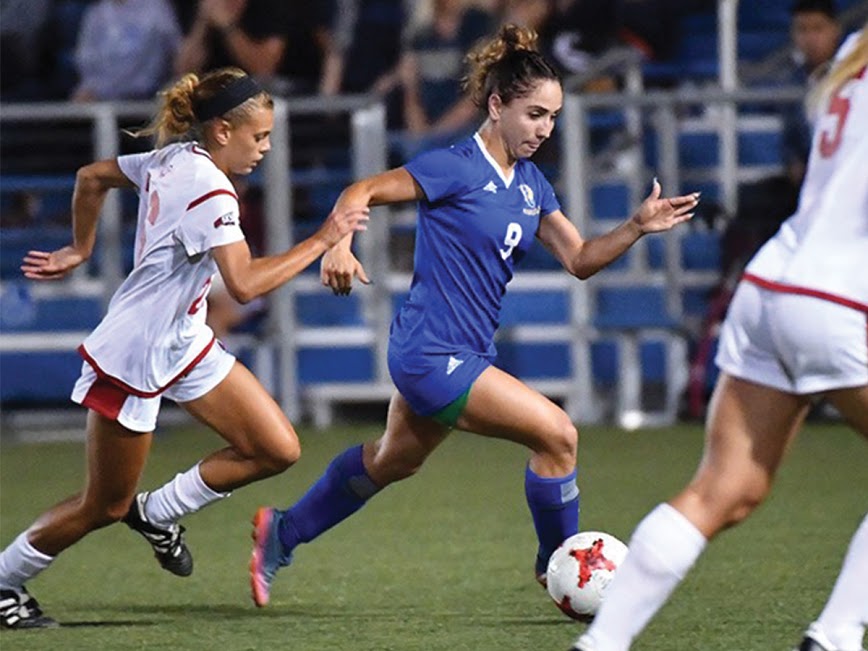 The UC Riverside women’s soccer team has struggled mightily in the first half of their 2017-18 season, going 2-7-2 in their first 11 games, but Head Coach Nat Gonzalez is hoping to get things turned around quickly. “Our goal is to kind of get this thing, right the ship if you will,” shares Gonzalez, whose focus is “to prepare for conference coming up in the next ten days.”

According to Gonzalez, he and his staff “predicted this was going to be not our best year, just because we had a lot of graduations over the last two seasons.” Over the past two seasons, the team has lost a total of 14 players to graduation, which has forced them to fill those spots with younger players which naturally makes them take a step back. The team is undergoing a bit of a rebuilding phase in which the coaching staff have had to put a lot of faith and responsibility onto the shoulders of their younger players. When younger players first start getting time on the pitch they’re bound to make a couple mistakes, which is exactly what has happened so far. Gonzalez shared that at least three of the team’s losses came at the hands of what Gonzalez calls “young mistakes,” like own goals. He added, “there was experience given last year that I thought was going to help us this year a little more than it has.” Gonzalez was clearly expecting some of the younger players to come into this season ready to produce, but it hasn’t happened yet.

One player Gonzalez wants to continue seeing progress from during conference play is senior forward Ashley Webb. Even though Webb is now a senior she has only been in UC Riverside’s soccer program for two years since transferring from Cerritos College last year. Webb is one of only six seniors on the squad and plays in the attacking half of the pitch which has struggled to put numbers up on the scoreboard. So far this season the team has only been able to score seven goals in 11 matches.

Despite their solid play throughout the season, Gonzalez also expressed concern about the lack of experience in the back line. To organize the defense, Gonzalez is looking to his two center back captains, sophomore Amanda Roy and junior Kyra Taylor. The defense has been the team’s strength throughout the first ten games, allowing only 17 goals in 10 games. The team’s defensive performance is down this year from last, allowing 17 goals in 10 games compared to 11 last season. Their offense has followed the trend, with this year’s seven goals falling short of the 15 scored in that same span last year.

If there is a bright side, it is that the Highlanders have yet to play a conference game. The team’s first in-conference matchup will be on Friday, September 29 at UC Santa Barbara (UCSB) (3-4-3). Gonzalez is hoping to “right the ship” now and do well in conference. Despite the team’s struggles, Gonzalez is encouraged by the team’s apparent camaraderie.  “I think we’re a tightknit group,” he shares, “They’ve really bought in.”

Over the past two seasons the Highlanders have struggled mightily on the road, going 2-11-1 in away games while going 5-4-4 at home over that same span. When asked about this disparity, Gonzalez was stumped, but adds that two of the losses on the road this year were played in higher altitude. “You hope to go .500 on the road, that’s what you hope for. We played two games in altitude in Colorado, that’s a factor … I think the comfort of being in your own bed and knowing the stadium” makes a difference.

The team’s only two wins of the year came in the Riverside Sports Complex. “Being at home there’s a comfort of sleeping in your own bed and knowing the stadium.” Gonzalez also emphasized an area of improvement is to close out overtime games. “One thing we can control is overtime,” he says. “We’ve gone to overtime a few times over the past couple years and we have to be able to turn those games into wins so that’s the part for me is something that we can definitely get better at.” Over the past two years the Highlanders have gone 0-3-3 in overtime games.

Women’s soccer has ten games left in the season (eight of which are in conference) to right the ship and be competitive in conference play, which is what Gonzalez and his staff are hoping for. The Highlanders next match will be the aforementioned conference opener on Friday, Sept. 29 at UCSB’s Harder Stadium.