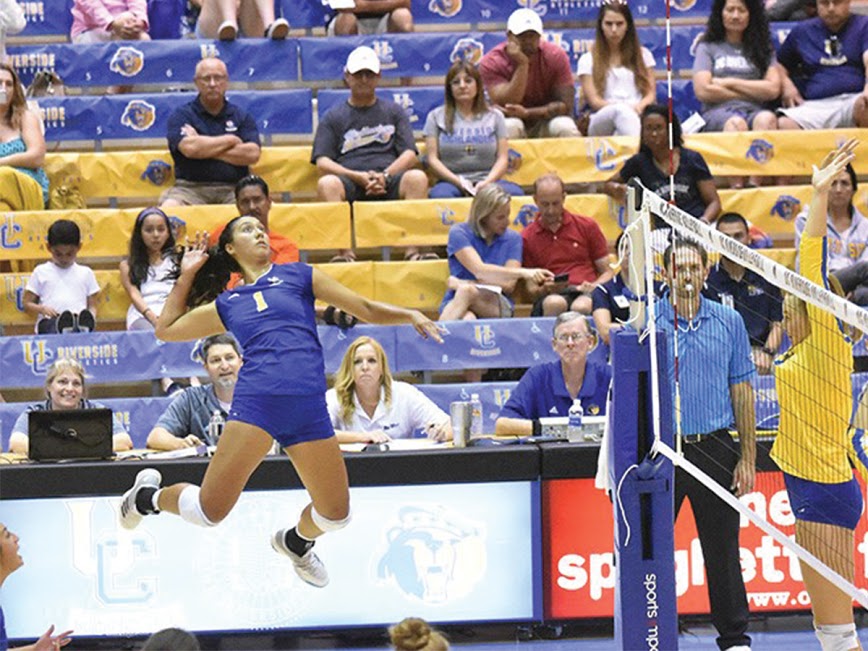 After achieving their best nonconference record since 2001 at 8-4, UCR volleyball suffered a loss in a five-set nail-biter against Long Beach State in their Big West Conference opener in the SRC Arena on Tuesday, Sept. 19.

UCR took the first set 25-23, despite Long Beach leading the set 15-8. The Highlanders stormed back scoring 12 of the next 17 points to even the score at 20-20, but the 49ers reclaimed the lead 23-21 until UCR closed the set out with a four-point run featuring two kills from third year transfer Kaiulani Ahuna. The second set seemed to be more of the same as Long Beach State jumped out to a seven point lead and lost it again, 23-21. However, the 49ers were able to generate a rally of their own and closed the set with a five-of-six point run to take the set 26-24.

The third set also went to the 49ers as they led the entire match. The fourth set was taken by the Highlanders 25-23 thanks to second-year outside hitter Mickayla Sherman’s five kills and a six point run to take the lead back from a 12-10 deficit. The fifth and final set started off with the Highlanders taking the lead 12-10 until the 49ers flipped the script to take a 14-12 lead that they would not give up despite UC Riverside tying the score on a few occasions.

Even in a losing effort, the Highlanders had several players who put up impressive numbers, including Sherman tallying 18 kills in the match for a season-high mark and Ahuna notched double-digit kills for the seventh time in the season.

UC Riverside then traveled up to UC Santa Barbara on Friday, Sept. 22 for their second Big West Conference game of the season where they dropped the match 3-0. The first set saw an early UCR lead, 19-15 before the Gauchos mounted a 10 of 12 point run to take the set. The second set was back and forth until 14-13, when the Gauchos pulled away on a six point rally. The third and final set saw the Highlanders lead early 9-5 until Santa Barbara scored nine of the next 13 points bringing the score to 14-13. The Highlanders reclaimed the lead at 19-17 but faltered again and gave up an 8-3 run to finish the set. Sherman tallied at least 10 kills for the third straight match.

The second game of the weekend did not go any better for the Highlanders as they dropped the game against Cal Poly 3-0. The first set was dominated by Cal Poly as the Mustangs rallied twice for five points and 11 points to take the set 25-20. The second set opened with a Highlander kill, but the Mustangs responded with six points in a row and never gave up the lead, winning the set 25-23. The third and final set opened up with seven straight points for the Mustangs, but the Highlanders managed to recover and even take the lead 22-21. Cal Poly was, however, able to score the final four of five points to seal the win.

The Highlanders are back in action on Saturday, Sept. 30 against Hawai’i at 7 p.m., kicking off a three-game Big West homestand.