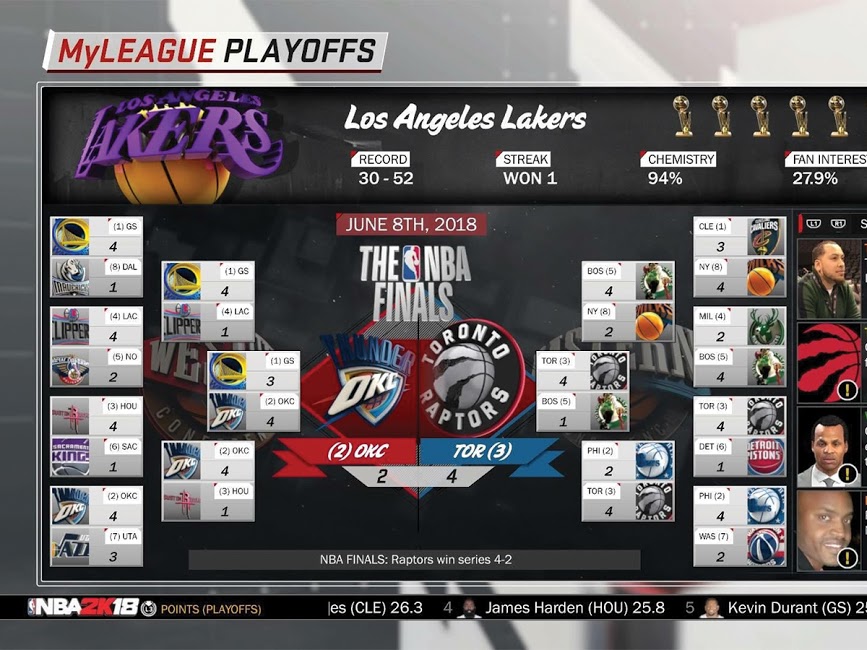 The 2017-18 NBA season is right around the corner, and there were many offseason moves (Paul George and Carmelo Anthony to the Oklahoma City Thunder; Kyrie departing to the Boston Celtics) that have already created plenty of hype and wild predictions for the year. With opening day arriving Oct. 17, we simulated the 2017-18 season (including the playoffs) on NBA 2K18. For fairness, we declined all trades throughout the season and, outside of a few injuries, kept the current rosters intact. If this season ends up anything like what 2K predicts, then we are in for a wild ride. Here’s how it went down:

Kings finish 6th in the West: While the arrival of De’Aaron Fox, Zach Randolph and George Hill has Sacramento Kings fans excited, they won’t be a sixth seed in the stacked Western Conference. The Kings have bolstered point guard play, post presence and veteran leadership, but in reality they will still be a cellar dweller in the powerhouse-filled West.

Spurs, T-Wolves don’t make playoffs: Speaking of powerhouses, two notable ones were left out of the postseason during the simulation: The San Antonio Spurs and Minnesota Timberwolves. There is always talk about the Spurs slowing down, but they have consistently proved the naysayers wrong by winning over 50 games for the past 18 seasons. This Spurs team won’t miss the playoffs unless Zaza Pachulia makes another attempt on Kawhi Leonard’s ankles (or life). The Timberwolves added a three-time all star in Jimmy Butler to go alongside budding All-Stars Karl Anthony Towns and Andrew Wiggins, who are both expected to make big jumps in their development this season. In all likelihood, the Spurs will be a top-four team and the Timberwolves will be a top-six seed.

Knicks upset Cavs in the first round: The New York Knicks have been a dumpster fire for the better part of a decade, and the departure of Melo only adds fuel to that disaster. The Knicks lack depth at every position, to put it nicely, and they did not exactly bolster their roster in the offseason. Still, 2K has them not only inching into the playoffs but pushing the Cavs out the door in the first round.

It’s a bold take, one that probably assumes LeBron suffered a season-ending injury just before the playoffs and Isaiah Thomas never actually shows up for the team. For Knicks fans, this would signal their triumphant arrival to the post-Melo era and likely lead to early developments of a Tim Hardaway and Kristaps Porzingis statue outside MSG.

Toronto wins it all: If you show me someone not named Drake who actually picked the Raptors as the NBA champions, I’ll show you a liar. Toronto is returning the majority of their roster that got swept by Cleveland so they didn’t make any big improvements personnel wise. The team did lock up Kyle Lowry to a three-year $93 million contract and forward Serge Ibaka on a three-year $65 million contract, and that is the extent of their offseason moves. The Raptors are definitely a playoff-caliber team, but there is little to no way they could knock off the Cavs or the Celtics in a seven-game series (2K simulated them routing Boston 4-1 in the Eastern Conference Finals).

Toronto’s simulated opponent was the newly revamped OKC Thunder who knocked off the Golden State Warriors in a seven-game Western Conference Finals. There isn’t a remote possibility of Toronto getting this far, nor is the likelihood much higher for OKC. But let’s run with it.

Toronto’s nucleus has been together longer, and OKC has to work out some kinks, but the Thunder simply have more talent. Russell Westbrook cannot be stopped by anyone in the league, especially not Kyle Lowry and the George-on-DeMar DeRozan matchup likely will result in a wash. Comparing both teams’ number three scoring options, Melo is more of a threat offensively than Serge Ibaka and the Thunder have enough height on their roster to battle against the likes of Ibaka and Jonas Valanciunas. Ultimately, OKC would probably win in six games.

Seems realistic enough given that he the number one overall pick for Philadelphia and will likely play a lot of productive minutes barring injury.

Gobert was a finalist for the award last year, along with Leonard and Draymond Green, when he led the league in blocks, defensive win shares and was third for defensive plus/minus.

The Warriors point guard would take home the award, which is possible but unlikely due to the sheer numbers of playmakers on that team. LeBron James and James Harden are probably the two favorites to win this award for the coming season.