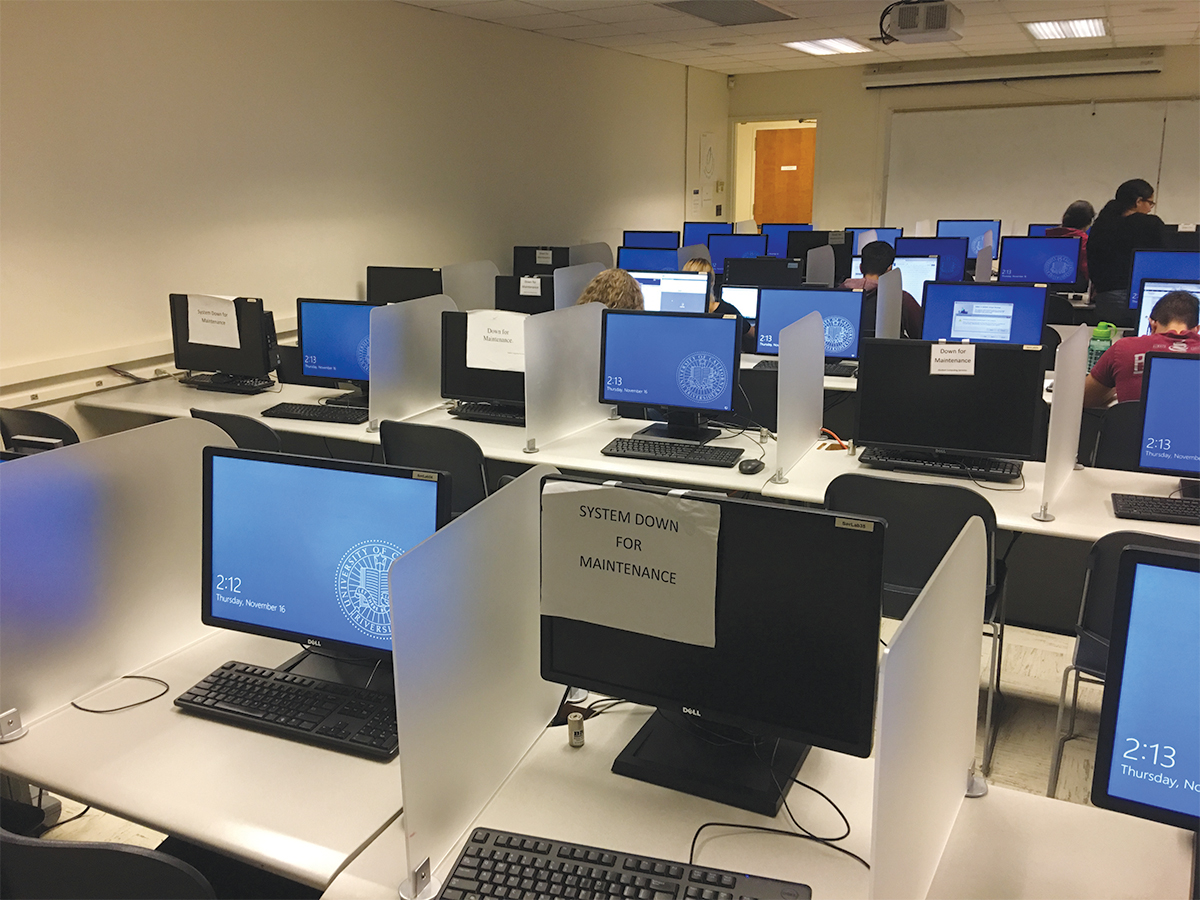 The Highlander sat down this week with Robert Newman, a former UCR Information Technology Services (ITS) employee to discuss the recent spate of layoffs of ITS staff. Newman, himself a victim of these layoffs, had almost completed 10 years of service at UCR as an IT specialist tasked with providing maintenance support to students, faculty and staff, both in response to service requests and at UCR’s 10 computer labs and laptop rental stations. His termination on Monday, Oct. 2 came as a surprise to him and the other 15 employees that lost their jobs.

“I was working on some computers in the Watkins lab,” Newman explained. “Then I got called in for a meeting.” Sitting across from him were Israel Fletes, director of Educational Technology and Computing Services, and Shelley Gupta, Chief Financial and Administrative Officer. The two administrators proceeded to inform Newman that they “were moving in a different direction” and that his services would no longer be needed. “I was shocked,” Newman says. “I didn’t expect this at all — it came out of the blue.”

In the days and weeks following the meeting, Newman explains that he talked to others, both former and current ITS employees, to try to pinpoint the reasoning behind his termination. The reasons given for the layoff seemingly changed with every person. “They told me it was because they were trying to move in a different direction, which is kind of a vague answer,” Newman says of his final meeting with ITS administrators. He later learned that, in subsequent staff meetings, “Danna (Gianforte, Assistant Vice Chancellor and Chief Information Officer) told the employees that the reason for the layoffs was because of budget concerns and a deficit that she had inherited from the previous CIO.”

Newman also pointed to his firing happening in the wake of his upcoming 10-year anniversary at UCR ITS as a strange coincidence. In February, Newman says, he would have been eligible for considerable health benefits upon retirement. Other workers laid off were nearing completion of up to 20 years, which would have entitled them to almost full post-retirement coverage. Newman says that, although this may not be the only reason, he is sure that the timing was a factor in the layoffs.

After losing his position, Newman came into contact with University Professional and Technical Employees (UPTE), a union representing thousands of staff across the UC system. The union, according to Newman, submitted a list of negotiation demands to UCR, and, although he was relieved to have union support, Newman expresses frustration with the university’s refusal to come to the table. “Labor relations weren’t interested in explaining why they decided to have the layoffs. The only thing they wanted from the union was whatever their demands were.” Newman adds, “We (the union) want to discuss the reason for the layoffs, and the (university) doesn’t.” It remains to be seen if, when and in what direction UCR and union negotiations will proceed.

Newman added that the biggest impact of the layoffs will be felt by UCR students, staff and faculty, as maintenance times are delayed. The cutting of professional staff means that UCR computing services now processes a growing amount of students and their problems with a seriously depleted workforce.

The computer labs, such as those inside Watkins and Sproul halls, have been particularly affected, a fact underscored by a student ITS employee who requested anonymity. “We’re only trained to troubleshoot certain problems,” the student explained. “When we encountered serious issues, we would turn to staff like Robert.” Student web printing, for example, had to be scaled down and limited to certain locations due to lack of manpower. “The printing system would get really backed up, so you would have hundreds of people in a queue. When I would ask (ITS staff) for help fixing the printers, the students would have to wait for the printers to be fixed, in addition to awaiting the people in front of them in the queue,” said the student.

Newman affirmed this, providing an example of eight desktop computers located in the Sproul 2225 computer lab. “The day I was laid off I had been working on these eight computers, which were down,” said Newman. “A month later, I came back to see the state of repairs. I found them just as they had been a month before.”

In addition to a lack of lab support, the ITS layoffs are predicted to have an impact on individual computer support services. “Under the new restructuring, I was now servicing multiple tickets a day,” Newman says, adding that often, “students had to wait without being able to use their computers while I serviced other tickets.” With the layoffs, Newman claims, this inadequate support would only be exacerbated.

To date, the issue of the layoffs has been brought up in the UCR Academic Senate. The Highlander spoke with Hayden Jackson, a student representative serving on the Student Services Fee Advisory Committee, who raised the issue. “I met with two ITS people (Gianforte and Fletes) and discussed our concerns with them. They explained to me that the layoffs are very broad, and they were designed to minimize impact.” Jackson clarified that, to him, the reasoning offered behind the layoffs seemed focused on financial constraints. “At the Academic Senate meeting two days later, they presented this idea to the Senate as a whole,” Jackson said, emphasizing the issue of budgetary problems as a recurring theme throughout UCR logistical and technical departments. “The staff have been doing this a long time. I don’t want to put this on one person, but this is a general problem of shortsightedness with regards to the budgets.”

Regarding the potential effects on students, Jackson emphasized, “We’re monitoring the impacts, we’re listening to students anytime they tell us there’s a problem.” The correlation between layoffs and decreased maintenance, however, was a connection Jackson was more careful to delineate. “Will the layoffs have any impact? I can’t say no. These problems existed before, and although I wouldn’t make that link, (the layoffs) don’t help anybody.”

Gianforte and Fletes did not provide comment for this story.