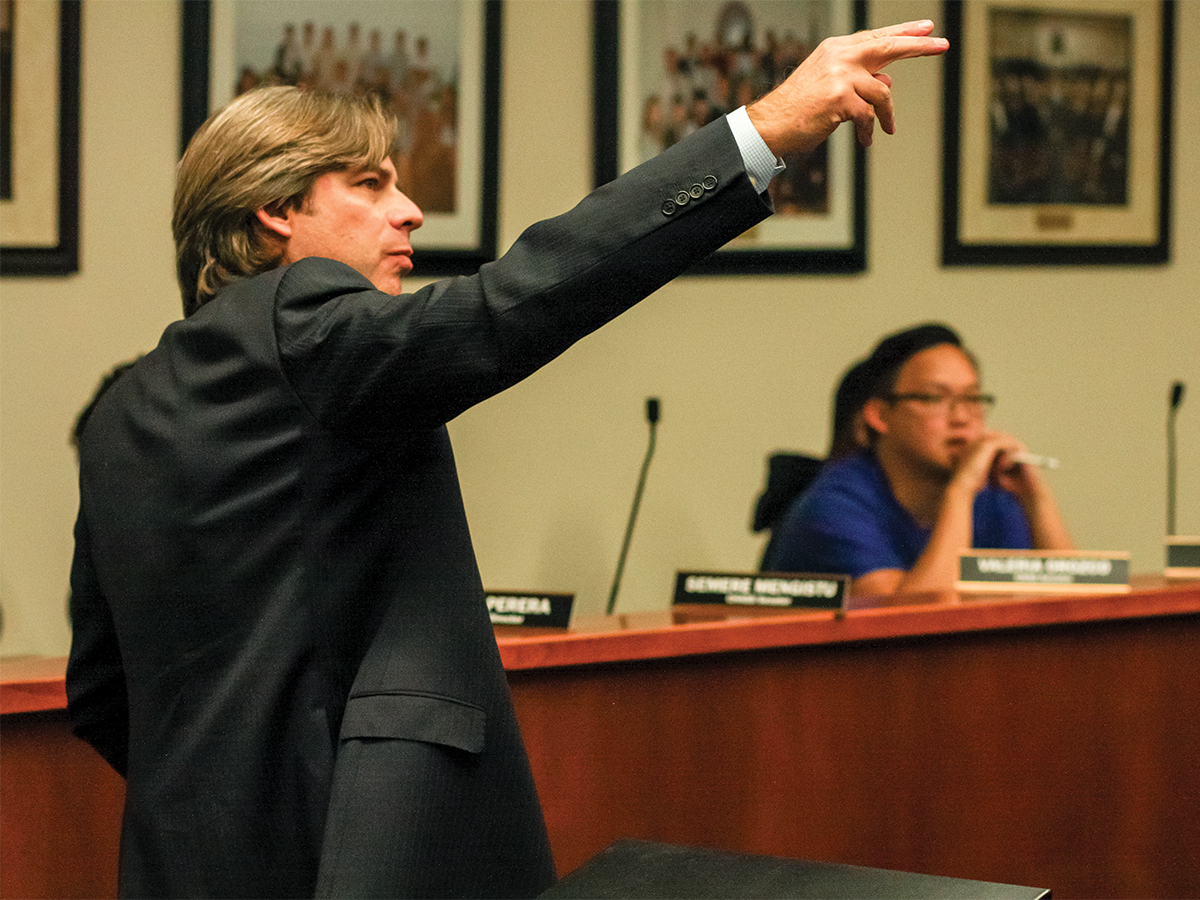 After taking a break from meeting in observance of the Thanksgiving holiday, the ASUCR senate gathered in HUB 222 last Wednesday, Nov. 29 for a meeting whose first hour centered around a discussion on UC Riverside’s strategic development plan, UCR 2020. Spearheaded by Executive Director of Real Estate Services and Asset Management Raoul Amescua, UCR campus planning presented an overview of their plans to develop housing, parking lots, commercial businesses and recreational facilities that would expand the northern end of campus.

The plan, and its centralized housing areas and vehicle-free road ways, is aimed to “help propel UCR to obtain its goals to become a residential campus and less of a commuter campus,” according to Amescua.

The benefits of the development plan were called into question by numerous student representatives. In questioning the committee, CHASS Senator Roy Tongilava noted the exorbitant amount of students experiencing housing insecurity across the UC system and highlighted UCR residential halls such as the Glen Mor apartments as being “unnecessarily flashy” with high rental rates.

“It’s going to be hard to keep it affordable,” responded Amescua. “We’re looking at (campus architects) to come up with designs that we can get even more affordable per bed than Glen Mor.”

Amescua emphasized that, beyond sustainability, the plan’s biggest benefit will be accommodating for an estimated “2,500 students that want on-campus housing but can’t get it.”

To Party or Not to Party

Elections Director Taylor Brown was set to present and get approved her elections timeline for the year on Wednesday evening but received pushback from BCOE Senator Patrick Le and CHASS Senators Mariam Al-Khalili and Tongilava on her inclusion of the party system.

Last year’s elections saw all candidates run as independents after all parties were disallowed from running due to what was found to be unfair political practices from the [YOUR]side party.

Al-Khalili believes the allowance of parties would encourage for candidates to “shield themselves behind the party (without a) clear direction of what they want to do in the organization.”

Brown, who just recently confirmed the members of her elections committee, noted that her plan for this year’s elections includes implementing stricter policies around laptopping (which her guidelines will allow) and party affiliations.

After numerous concerns were raised by Senators Le, Al-Khalili and Tongilava, the senate elected to table the approval of the timeline to next week.

Currently, each student pays a quarterly $14.00 Highlander Empowerment fee that goes toward student ethnic and gender programs, not including Undocumented Student Programs, with some kickback going to UCR Financial Aid. The referendum, which was passed in 2014, is set to expire in 2020.

If passed this year, Reyes said the task force’s plan is to make the referendum non-expiring, include funding going toward Undocumented Student Programs, increase the fee to $16.00 a quarter and have it replace the current referendum once it expires in 2020.

Reyes attested that the referendum has “made numerous events possible through the centers … students have benefitted from this referendum highly as our centers have been able to provide more services such as, but not limited to, more programs both center-based and student-initiated … sponsor(ing) students for conference and travel … and even hir(ing) more staff.”

ASUCR senators and executive officers will be holding their final meeting of the quarter this Wednesday, Dec. 6 in the senate chambers (HUB 222).