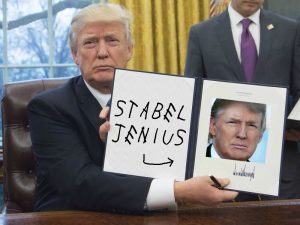 A little under a year has passed since President Donald Trump was inaugurated, and although he’s had his fair share of speeches and addresses, there is one platform from which we seem to hear from him the most: His Twitter account. From calling Kim Jong-un “little rocket man,” to retweeting a GIF of what appears to be him hitting Hillary Clinton with a golf ball, Trump has certainly raised questions as to whether the leader of our nation ought to be spending this much time posting such unprofessional content for the social media world to see.

Trump’s eccentric behavior came into further question after an explosive tell-all book, “Fire and Fury,” was published on Tuesday, Jan. 9, including nearly 200 interviews’ worth of his staff expressing that there is something “fundamentally wrong” with him. A day after the book’s publication, Trump took to Twitter to compose a three-part tweet validating that his mental stability was more than fine, boasting that it was, in fact, one of his “two greatest assets,” the other one “being, like, really smart.” He closed his argument by claiming that his accomplishments have earned him the title of a “very stable genius.”

In the aftermath of yet another social media rampage, now more than ever, Trump’s mental health is being called into question, with psychiatrists like Bandy Lee, Judith Herman and Robert Jay Lifton speaking to various news outlets such as Vox and CNN about what they’ve collected from watching his behavior. Contrary to what he wanted, Trump’s blatant narcissism just went hand-in-hand with the speculation surrounding his mental instability, further deeming him a dangerous fit for presidency.

If one were to try and trace the root of where Donald Trump’s questionable mentality stems from, it would lead to his Twitter account. Aside from this recent fiasco, Trump is infamous for tweeting up a storm when any sort of controversial material pops up. Like a fish taking its bait, he is lured to put in his two cents on anything on the horizon that has the ability to make him look bad. Doesn’t agree with the news? It’s all fake. Doesn’t like the outpour of criticism? He tweets about “Crooked Hillary” to remind the world that he’s not the only one who’s committed wrongdoings.

Going back to the three-part tweet in which Donald Trump tried to clear up any misconceptions about his mental health, he lists the big accomplishments in his life, claiming there’s no way somebody short of genius could have done what he’s done. The narcissist in him shines when he talks about being a “VERY successful businessman” (he declared bankruptcy four times during his business career) and a “top T.V. star.” But, our nation is not a reality show that allows for multiple takes.

With tensions between the U.S. and North Korea rising and test missiles being launched, Trump takes to Twitter to bully Kim Jong-Un, name-calling and bragging about our nuclear assets without much thought about the repercussions of such reckless behavior. Although a social media standoff isn’t enough to set off something as catastrophic as a nuclear war, Trump’s trouble with handling such international relations has the possibility of alienating allies that this country has worked so hard to maintain in the past years.

All tweets aside, Trump has certainly caught the eye of a large audience, including elected officials of both parties and even psychiatrists, all having something to say about the way he’s worked in his presidency so far. Republican Senator Bob Corker of Tennessee famously bashed Trump back in August, stating that Trump lacks “the ability” and “some of the competence” to be a successful president. Richard W. Painter, a former adviser to President George W. Bush, also expressed his feelings about Donald Trump being “psychologically unfit” for his position and urged Congress and the U.N. Security Council to take action.

Additionally, while the Goldwater Rule deems it unethical for psychiatrists to comment on politicians’ mental health, Bandy Lee, an assistant professor in forensic psychiatry at the Yale School of Medicine, recently spoke to 12 members of Congress about Trump’s dangerously unraveling mental state. Although defying the presupposed ethics of psychiatry, Lee also spoke to Vox about how she believed it was moral to assess the dangerous behavior of our nation’s leader in order to inform the people about his unusual lack of professionalism and his inability to cope with the stressors of being a president in a rational way. In the interview with Vox, Lee expressed further concern at the type of example he’s setting for his supporters and worries of Trump normalizing a violent and aggressive culture.

The common American people as well as government officials and psychiatrists breaking their code of ethics, have all expressed concern about Trump’s behavior. Unless Trump can miraculously come to terms with his own personal wrongdoings and rise to the occasion when it comes to condemning certain behaviors of his supporters, his current state will only continue to put the people of this nation at risk, whether it’s through a hateful blast on Twitter or careless policy.

With social media’s heavy influence on trends, smoking has made a return