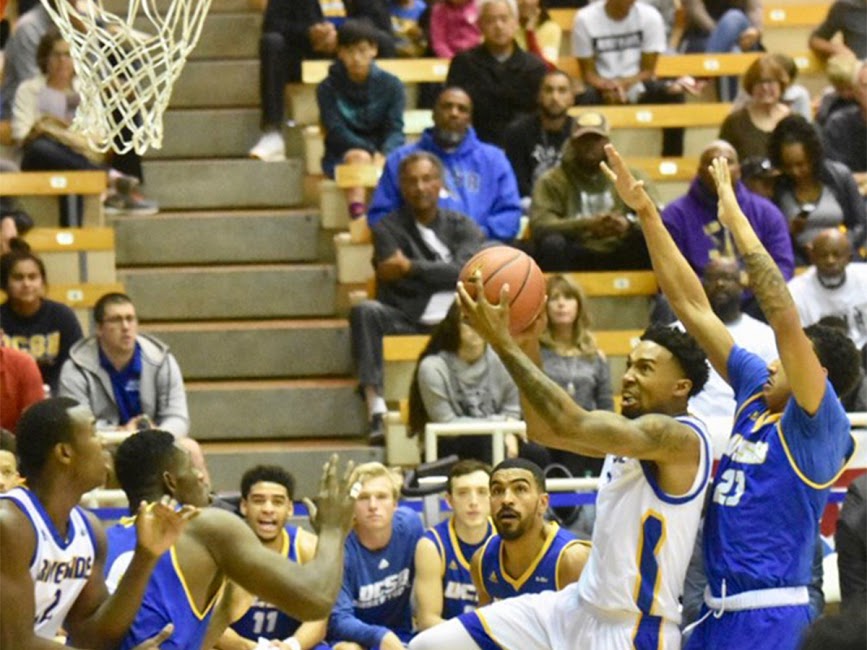 After a three-game homestand the UCR men’s basketball team (5-16, 0-7) hit the road to take on UC Irvine (9-14, 4-3) on Wednesday, Jan. 24. The Highlanders were trying to notch their first conference win of the season, but that proved impossible as the they left their offense in Riverside.

The Highlanders opened up the game against Irvine with their only showing of efficient offense, starting 4-6 and taking a 10-9 lead. Senior forward Alex Larsson and redshirt sophomore forward Eric Rwahwire carried the load for UCR early, scoring all 12 Highlander points together. Larsson, however, exited the game after 12 minutes due to an ankle injury sustained in the game and would not return. The loss of inside presence hampered the Highlanders on both sides of the ball, as Irvine attacked the paint and mounted a 14-1 point run. While the Anteaters were on a run, the Highlanders went 1 of 14 on all shot attempts as the first half ended with Irvine up 39-19.

The second half was more of the same for both teams as the Anteaters continued to dominate while the Highlanders were unable to stop the bleeding or put together an offense. Despite exiting the game early, Larsson still led all UCR scorers with eight points. Irvine got the win 79-40.

On Saturday, Jan. 27 the Highlanders looked to bounce back on their home floor as they took on UC Santa Barbara (16-5, 5-2). UCR was once again without point guard Dikymbe Martin for the fourth straight game. Larsson was also out due to the ankle injury sustained against UC Irvine and both players’ absence was felt. Of course, the hole in the lineup allowed a few other Highlanders to step up and have career nights.

Redshirt senior guard Chance Murray recorded his first career double-double with 18 points and 11 assists. Senior forward Brandon Rosser pitched in a career-high 17 points for the Highlanders to back Murray up, along with a career high 10 points and four assists from freshman guard Alec Hickman. Despite all three Highlanders having career games, it wasn’t quite enough to get the win. The Gauchos led the entire game, but the Highlanders were able to keep in striking distance for most of the game. UCR was unable to muster the offense to take the lead, and the Gauchos put together a 7-0 run with seven minutes remaining to put the game away, 76-69

The Highlanders are on the road for their next two games as they take on Cal Poly on Wednesday, Jan. 31 and Hawai’i on Saturday, Feb. 7. Both matchups are the first meetings of the year for the Highlanders.