Highlander
Home News “Getting back to the culture:” Dining optimistic about Barn expansion 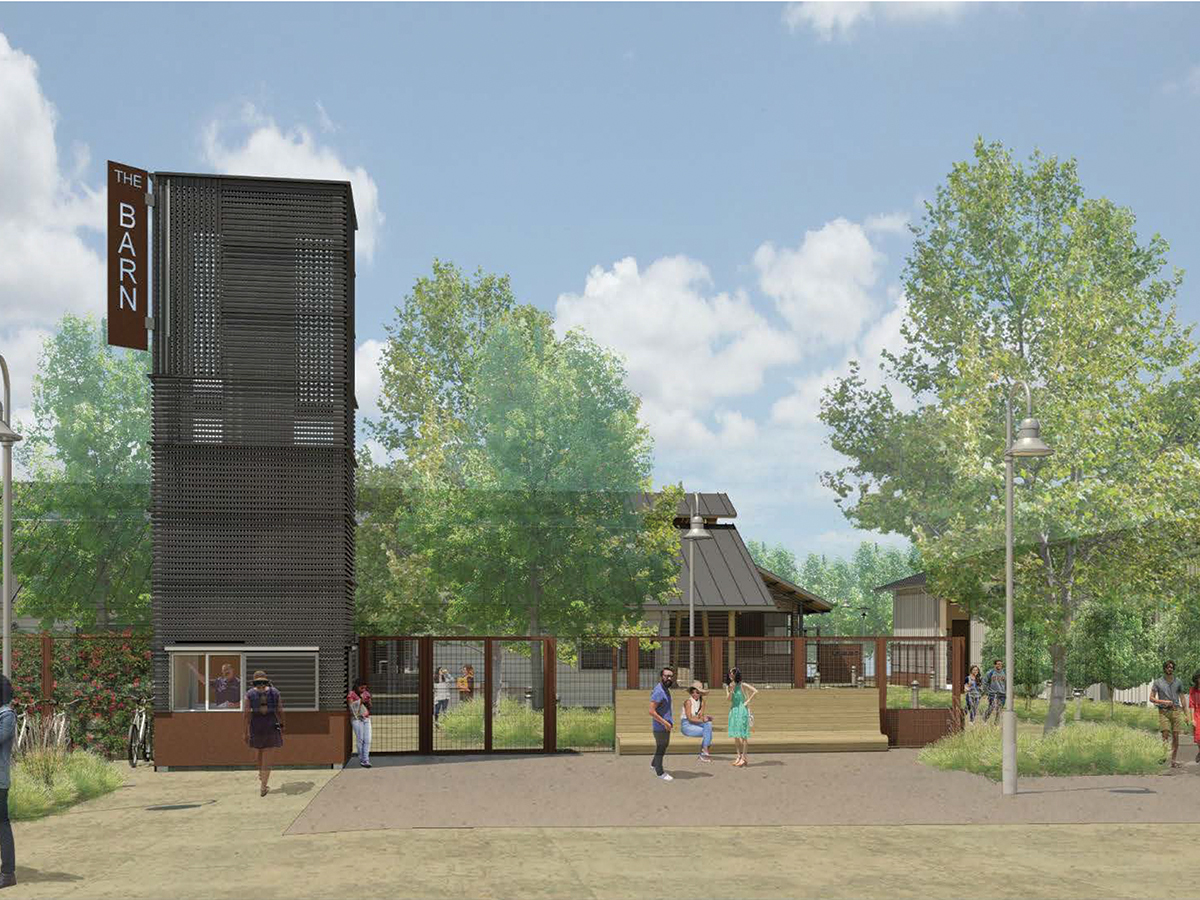 During an ASUCR meeting in May 2017, David Henry, executive director of Dining, Hospitality and Retail Services (Dining) announced a full renovation for The Barn restaurant.

The timeline of this project, which is being undertaken by Berkeley, California-based Fernau and Hartman Architects, calls for the closing of The Barn in June 2018 shortly after finals week, a soft opening planned December of 2019 and a full reopening slated for January 2020.

The Barn is the oldest building at UCR, first constructed in 1916 as a collection of horse stables, a carpenter shop, hay barn and wagon shed. The stables were converted into a cafeteria in 1954 upon UCR’s opening year. The current Barn is not the original as it burnt down in December of 1970 and had to be completely rebuilt.

With all of these changes comes another: A full renovation and expansion of the current premises to include a brand new Barn Theater, outdoor patio with a permanent stage and a 50 to 60 seat faculty and staff dining area with a bar.

In an interview with The Highlander, Henry described the entire plan. Starting with the current restaurant, Henry explained they were adding an entirely new kitchen and larger loading dock to accommodate an expanded operation. Inside the restaurant, the plan calls for booth seating on the side, absorbing the wooden beams which Henry said could be somewhat dangerous. On the opposite side of the booths, the beams will come down into a large high-top bar-style long table, similar to what exists in the HUB dining area currently, with moveable tables and chairs in the center.

Additionally, the architects will be removing the stage which, according to Henry, “always felt … very dark and cave-like … unless you’re doing entertainment, it feels like an entertainment venue, but when you’re not, it feels like it’s turned off, it’s dark, it’s not very inviting.” In lieu of the stage, they will be building a “very-sizable” window to let more natural light into the building. There will be a moveable barn door to cover the window in the event that there will be small-scale entertainment in the restaurant itself. There will be an estimated 95 seats whereas in the current space, there is around 80 seats.

The faculty and staff dining will be located adjacent to The Barn. According to the plans that Henry provided to The Highlander, there will be a small finishing and storage kitchen for guests seated inside. Henry explained that, generally, the interior will be primarily crafted with wood to maintain the overall culture of The Barn as well as a more relaxed atmosphere with a large floor-to-ceiling window looking out into the courtyard. The area, which will open with a different name, will primarily be used for buffet-style dining options with small appetizers served later in the day. The space is projected to hold around 60 seats.

The new courtyard, which will be partially covered, will be between the restaurant and the faculty and staff dining area and consist of a permanent and raised stage with outdoor speakers as well as a light system with the goal of hosting more entertainment. Henry explained that, ideally, there will be an independent booking agent that will garner a “large-scale entertainer” twice a month, “medium-sized entertainer” around four times a month and smaller scale performances around 10 times a month. Whether the performances will be an everyday occurrence, Henry said, has not been determined.

Included in this space will be another bar that will serve beer and wine. The operator of the bar, including the bar inside the faculty and staff dining, will be a third-party vendor which will provide the staff. Henry explained that the reason for this is because, since UCR is under the auspices of the state of California, it is not allowed to hold its own liquor license. The vendor may have a similar arrangement with the campus as the HUB restaurants do, with a small cut of the profit coming back to the campus.

The current Barn Theater will be totally razed and rebuilt, because according to Henry, the space needs a considerable amount of work and was found to be cheaper to conduct a “scrape-and-rebuild” rather than a renovation. The building will be pushed slightly back from its current location to allow a more open and free-flowing area in addition to more green space. There will be a sliding-barn door also to allow a more open space for guests. The plans also call for new public restrooms connected to the theater open for use at any time.

Henry also highlighted a planned “ticket tower” to be located in the front of the complex. The tower will be used as a ticket booth for ticketed entertainment events but also host a large illuminated sign reading “The Barn.” According to Henry, “there was a lot of discussion over this so-called ‘ticket tower.’ At one point in time, it was intended to just be a ticket window on The Barn itself, but we couldn’t figure out how to get you into the ticket window without closing off the patio.” Described by Henry as originally planned to be a ticket booth to keep the patio open, the architectural firm suggested a “pinnacle or icon of the whole thing, ‘it needs to be a ticket tower,’” explained Henry.

Though Henry said he was originally unsure about the idea, after a suggestion to light the sign, Henry explained that it makes The Barn more of “a destination focal point.” The ticket tower, however, may not survive the event of a budget problem, Henry said, “if there’s a budget issue somewhere along the way, that might be the first thing to be manipulated.”

The entire project, which is not connected to the North Campus expansion plan, is expected to cost around $18-20 million and is covered by a loan. Auxiliary Services is responsible for overseeing the debt accumulated by the project. Henry explained that the budget “looks pretty good” and is insistent that the cost does not exceed the budgeted amount.

A primary concern for this project is keeping the original culture of The Barn intact. The architecture will be similar in order to maintain the image of a barn with metal-like roofs and an exterior similar to the original barn. Henry highlighted the use of wood in several instances for the exterior and interior designs to make the facilities more “timeless … you might change the art, you might change the tables but the rest of it could last the test of time.” Henry believes that by remodeling the space, the Barn’s original character will be emphasized, something that was originally an entertainment and community area for years. “Our intent is to bring that back. We want to try and keep a little bit of the old, obviously build new and hopefully we don’t feel like we have lost the roots along the way,” said Henry.

The staff will increase, according to Henry, with an estimated 10-12 cooks and several more staff to maintain and wait the premises, possibly increasing the staff by a factor of four. Most of the employees will be students. Additionally, there will be no layoffs. Instead, current staff will be transferred to other locations in Dining.

Other dining locations in the meantime will include a buffet-style option in the Alumni and Visitor’s Center two days a week, a food truck patio constructed near Sproul expected to be completed by the beginning of fall 2018, and a newly renovated Ivan’s at Hinderaker which will expand into the lobby on the left side of the building. This will host two cash registers, espresso machines, capacities for blended drinks, a soup urn and an open-air refrigerator for sandwiches. Henry also hopes to bring more meaning to the location by informing people about who the namesake of the cafe is, Ivan Hinderaker, a celebrated former chancellor of UCR from 1964 to 1979. One of the planned methods of doing so will be a narrative plaque on Hinderaker above the condiment counter.

Dining’s other projects, aside from the proposed Ivan’s renovation, will be a new cafe in between the Materials Science and Engineering building and the new research building, MRB1, behind it. The cafe will offer coffee, hot sandwiches, soups and other dining options to serve that area. Also slated is the new Glasgow dining facility behind the Aberdeen and Inverness Residence Hall featuring an exhibition bakery and expanded dining hall. The timeline for this construction is currently unknown as the planning for the project is in the very early stages.

Throughout 2018 and 2019, Dining plans to conduct research and development on the menu and bar items with beer and wine panels and food tastings. Henry indicated that they are trying to source local beer varieties for the bar which will feature 12 tap handles. The Barn will close starting in the summer of 2018 and is expected to reopen in January of 2020.