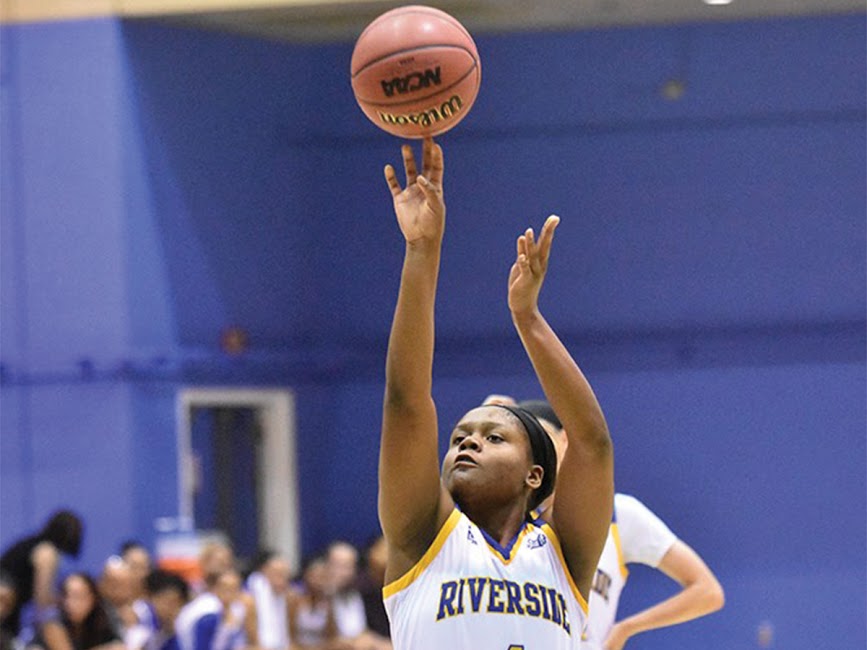 UC Riverside’s women’s basketball (7-18, 4-7) team broke their four-game losing streak with a win over UC Santa Barbara (9-14, 6-5) on Thursday, Feb. 8, 84-76. The Highlanders were also celebrating National Girls and Women in Sports Day so everyone in the arena was wearing pink UCR Adidas shirts that were handed out prior to the game and the team wore custom pink uniforms.

Riverside was unable to break away from Santa Barbara on the scoreboard after the first quarter of play despite senior guard Michelle Curry’s hot start that saw her score 11 of the team’s 23 first-quarter points. In the second quarter the Highlanders started firing on all cylinders, scoring 22 points while simultaneously tightening up their defense to only allow 12 Gaucho points. In the first half UCR shot 66 percent from the field while holding UCSB to 40 percent, allowing the Highlanders to take a 45-35 lead into halftime.

The Highlanders started the third quarter cold and allowed the Gauchos to quickly cut the lead down. UCSB scored 10 unanswered points to tie the game at 45, but Riverside was able to hold onto the lead throughout the third quarter. UCSB was largely able to fight back into this game because of their ability to play inside and out on the offensive end, mainly funneling the ball through senior center Drew Edelman, who finished with 21 points and 10 rebounds on Thursday. The Gauchos team has a plethora of three-point shooters such as redshirt junior Sarah Porter and freshmen guard Sarah Bates, who both made four three-pointers each in this game and benefited from post players kicking the ball when the defense collapses. That balanced offensive attack helped UCSB finally capture a 60-59 lead in the fourth quarter of play off of freshman Aliceah Hernandez’s three-pointer with eight minutes left to play. There were six lead changes and four ties in the fourth quarter before UCR senior guard Lauren Holt hit a jump shot that would put the Highlanders ahead for good.

Michelle Curry finished with a career-high 30 points on 10-15 shooting and was clearly the engine that pushed UCR to the victory. Curry also added nine rebounds, four assists and three steals to her statline, showcasing the unrelenting energy she brings every game. Holt was also able to keep her 17-game double-digit scoring streak alive despite a slow start, finishing with 15 points on 46 percent from the field.

UCR then went on the road to face UC Irvine (16-8, 8-2) on Saturday, Feb. 10, where they suffered their seventh conference loss, 76-63. The Highlanders shot an abysmal 29 percent from the field in the first half but were still able to keep the deficit within five because Irvine was also shooting poorly at 32 percent. Riverside was able to outscore Irvine in the third by one, but the Anteaters ran away with it in the final quarter of play, outscoring UCR by 10.