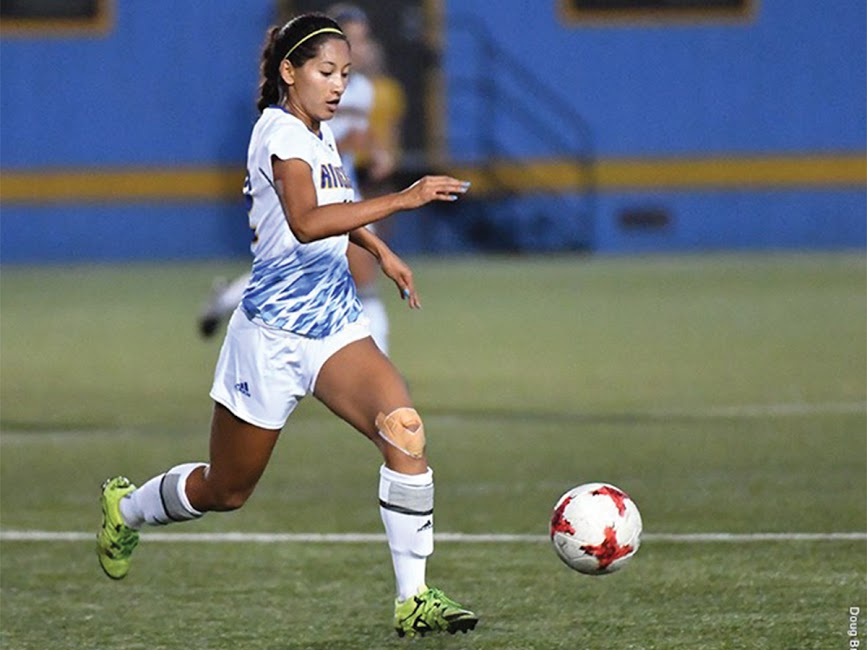 Home Sports “It’s so empowering to play for something so much bigger than me”:...

UCR Highlander soccer has never sent one of their players to the World Cup Qualifiers level — until now. Quinley Quezada, a junior midfielder for the women’s soccer team at UCR, has been selected to play for the Philippines’ national women’s soccer team. Quezada had an impressive year for the Highlanders; she scored nine points on the season, improving drastically from the four combined points she had in the two seasons prior. Now Quezada is in the Philippines, representing her country in the 2018 AFC Women’s Asian Cup this month, where they’re hoping they can qualify for the 2019 World Cup. The team won their first game against the number one seed Jordan on Friday, and they are ranked number two in their group behind China, whom they face Monday. The Highlander had an interview with Quinley over email where she shared her experience with the team so far and the personal significance of representing her country.

The interview has been lightly edited for clarity.

Dominic Petric: What influenced you to play soccer? As a youth? In college? For the Philippine National team?

Quinley Quezada: I started playing soccer when I was 6 years old. My parents put my sister, Taymar, in AYSO soccer. My parents said that I would constantly beg them on the sideline to play, but at that time I was too young. The next year my parents put me on the same team as Taymar and from then on I played a year up. Throughout my youth, I’ve played other sports such as swimming, track and field and cross country, but I’ve always had a strong passion for soccer. I started playing club when I was 13 years old at the lowest level, bronze, and from then on, it was a goal to play for a (Division I) college program. Luckily, I ended up at UCR. I knew I always wanted to play professionally, but I didn’t really think of playing for a national team. The opportunity to play for the Philippines presented itself to me when the previous head coach scouted me at one of my UCR games with the help of (Head Coach) Nat (Gonzalez). I believe that every team I’ve been on and every experience has prepared me for playing with the Philippines’ national team. My family has given me the greatest support throughout my journeys, and they have been a big influence for me to keep pushing to be the best that I can be in a sport that I love.

Petric: What does it mean to you to be able to represent the Philippines?

Quezada: It’s so empowering to play for something so much bigger than me. When we’ve had trainings in Manila, little boys and girls would come out to watch and when we would stretch, the kids would imitate us. They were so happy to give us high fives and play with the ball after training. It was heartwarming to see the natives’ love for futbol and their support for our team. My mom and grandparents were born in the Philippines, and I love that I can play for a part of my heritage. It’s truly an honor to represent the Philippines and we hope to make them proud.

Petric: How much higher of a skill level does playing for the national team require?

Quezada: From playing with the national team I’ve realized that the level of play is high, but it is more about the technical side of the game, not so much the physical part of soccer. Most importantly, it requires a high level of soccer IQ. You have to think two steps ahead, know where you’re going to pass the ball before you receive it, anticipate what your teammate will do and adjust your movement. Teamwise, it is about having a plan and working as a unit to achieve it, whether it’s offensive or defensive. At the national level a team has limited substitution, so on the field, it is impossible to go 100 percent for 90-plus minutes, and so, you have to control the game while realizing you can’t go 100 percent all the time. You must choose your moments, when to press or sit back, and wait for your opponent to make the move. Overall, playing for the national team requires a mix of physical and mental strength. It isn’t fully about how big, fast or strong someone is, it’s about how efficiently they can use their strengths against their opponent.

Petric: How well have you gotten to know your Filipina teammates? Do you have a fun anecdote you’d like to share about them?

Quezada: I first joined the team in late November and we’ve had camps every month leading up to the tournament, so I’ve gotten to know my teammates pretty well. They are all such great people and teammates. They have made me and all the girls feel so welcomed to the team. The girls that are native born in the Philippines are so energetic and have such positive attitudes. One of the girls is teaching me how to speak the language. I now know how to count to ten in Tagalog, haha.

Petric: What are your thoughts on the team as a whole?

Quezada: Since this is a team where everyone comes from different backgrounds and hometowns, it’s great to see how much of a team we are. We’ve gone through multiple obstacles and made sacrifices, but playing for our country has united us. We have a chance to make history and inspire a nation. We have this great opportunity ahead of us, and I know for a fact that we won’t go down without a fight.

Petric: How does it feel to be the first UCR soccer player to play in World Cup Qualifiers for their full national team?

Quezada: It’s crazy! I actually didn’t know that I was the first from UCR soccer to play in a World Cup Qualifiers until Nat said it. It’s incredible to see how UCR soccer has helped some of our alumni reach the professional stage, and now the World Cup stage. It’s exciting to see so many of us play at the next level!