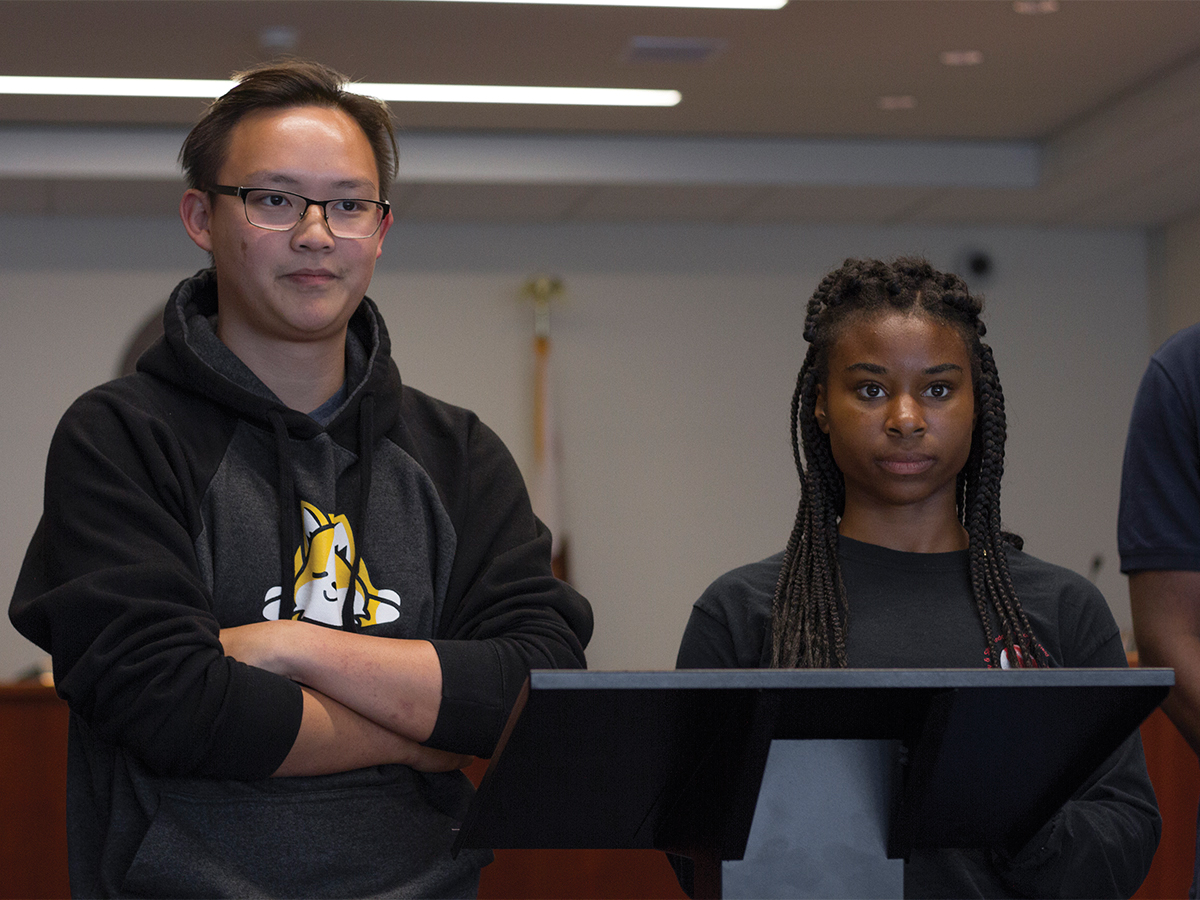 This program, built by BCOE Senator Patrick Le, a fourth-year computer science major, was meant to track how many students had voted, and, in a case of human error, over 20,000 more students were added to the list of students already in the system. This gave ASUCR officials the illusion of a vastly different outcome; over 20 percent of students were believed to have voted, meeting the threshold for referenda to pass.

In reality, however, only 14.39 percent of undergraduate students voted, meaning the referenda failed. This angered many after news seeped out of ASUCR that the minimum had in fact been met.

In an interview, Elections Director Taylor Brown expressed that the elections committee’s work was “exemplary,” but said it was unfortunate the student body “is kind of apathetic and didn’t really turn out as we thought they would even with the incentives.”

Brown was referring to the incentivized voting system, in which students received free food and beverages upon casting their ballot. The voting process required students to swipe their student ID’s to get a ballot. Due to human error, the number of students enrolled in the system was duplicated, leading to over-inflated turnout numbers. “When you swiped your ID, it registered the student twice and so we had twice as many votes as we thought we did,” said Brown.

However, in an interview last Tuesday afternoon, Brown said she was skeptical of Le’s estimates throughout the week, because “Patrick wasn’t the one who put the ballots in the safe everyday.” She explained that from her perspective, the stack of ballots looked like less than the numbers they were receiving, stating, “We would look at the stack and say, ‘OK, I guess that looks like 1,500 today,’ but we didn’t know until we actually counted the votes, we were just going off of what Patrick said.”

According to Brown, rumors began to circulate around campus that they had reached the threshold by the Friday of voting week. Brown mentioned that she was tagged in a post that announced ASUCR had reached the 20 percent threshold, but stated she was cautiously optimistic, since “we wouldn’t have known until we counted the ballots.” When Sunday came, Brown and other staff spent 10 hours counting the ballots and she was severely disappointed that they “came up so short.”

Le claimed in an interview with The Highlander that his software had saved ASUCR between $6,500 to $8,000 since that is what was traditionally spent for a third-party to run an electronic voting system. Le’s team also built a program that optically scanned about 65 percent of the ballots, and those that had “X’s or incorrect marks were manually counted because our software could not account for those.”

Le explained that his software consisted of a cloud server that ran the website, both the “front-end,” or what is shown on the screen, and the “back-end,” or the database where students’ information is held. This secret database consisted of three categories: Full name, ID number and the student’s college.

The problem occurred when a set of voter tables were duplicated in the system. “They would have the student ID, the name and their college and there’s another column to tell whether or not they voted,” said Le. “Some time around Tuesday or Wednesday, we were making a new patch for the website because we found a bug,” and they wanted to fix the problem before Wednesday’s votes were counted.

They had sought to build another table that only contained candidate information, separate from the table of voters. “But I guess some miscommunication or something like that, when we ran the script, we didn’t change two parameters — one of them we didn’t change what table it was being inserted to and then the source of where we’re getting it inserted to,” Le said.

Le and his team had a spreadsheet of nearly 20,000 undergraduates and “you do some code in that, and every single row is inserted into the database itself … We forgot to change that parameter so what we thought was the candidate’s Excel file, we were pushing the voters’ Excel file.” The database already had the full number of undergraduate students, but they transferred in duplicates of every voter.

“It was just a human error,” said Le, “we just didn’t remember to change that specific parameter.”

Le explained to The Highlander that he had announced they surpassed 3,800 votes on Friday afternoon to an ASUCR group chat, adding that he did not know of any bug until Sunday, thinking the software was “working perfectly.”

“I announced it to the group chat and I suppose rumors spread really fast,” said Le. “I didn’t expect it to go any further than that group chat.”

ASUCR President Aram Ayra sent an email to the student body at 1:09 p.m. on Friday, April 27 explaining that they were still “a little short of our goal for 20 percent overall turnout.” According to Le, word reached the general student body around 3 p.m. on Friday that they had met the 20 percent, prompting some ASUCR members in the group chat to question the validity of this, as it seemed impossible for several hundred students to vote in such a short time span.

Brown remarked that Le’s messages to the group chat were “not consistent” and additionally felt that he was not taking her seriously when she questioned his announcements.

In screenshots of the conversation provided to The Highlander, Le wrote, “3,952 … we made it … but keep the votes coming.” Brown responded asking, “You’re telling me 200 voted in the past 45 minutes?”

Le responded with “I guess so,” to which Brown retorted, “No guessing! Could you imagine telling all these students one thing and then coming up short?”

Le then told Brown, “Well don’t share this info lol.” But people did share the information, without the permission of Brown, making her feel like students knew the count before she did as she was continuously tagged in Facebook posts.

Brown explained that, for the sake of transparency, she wanted students to know the miscount was a “misunderstanding.” However, the screenshots make it seem as though officials in ASUCR knew there was an issue, but did not heed it.

“I didn’t want to believe it wasn’t true. It seemed like there were a lot of people going to the polls on Friday because that was the biggest stack out of all the other days surprisingly,” said Brown. Brown said that the possibility of an error did not occur to her until Sunday when they counted the ballots.

Members of the chat did, however, joke about the fluctuations in numbers, reflecting an attitude seemingly ambivalent to the success of the referenda. Le said that the group chat “was never supposed to be a professional environment” but expressed that it was saddening when it was revealed that they did not reach the level. “Most of the time … from my perspective, it was never meant to be a laughing matter at all.”

Student activist Justin Domecillo ran for a senate seat, but was defeated with only 334 votes cast in his favor. In an interview with The Highlander, Domecillo acknowledged that the miscount “made the vote seem much less urgent and I think it had a real impact” on voter turnout.

Domecillo initially tried to start a recall effort but abandoned that idea, writing that “it would require over 3,000 signatures and I’m not too sure that the student body can emotionally and mentally invest in such an undertaking at this time.” He did say, however, that he is forming a group that will produce literature on the importance of engagement in student government, host weekly workshops that go over the ASUCR bylaws, constitution and referenda and walk around campus and explain to people what it means to pass the referenda. Domecillo mentioned that Semi Cole, current vice president of internal affairs and 2018-19 president elect, expressed interest in and may seek to implement some of the plans Domecillo has to strengthen students’ relationship with ASUCR.

Domecillo explained that he has “a great deal of confidence in many of the newly-elected senators,” but is unsure of the Executive Cabinet, questioning “whether they will actually work for the students … in my experience, their rhetoric never quite aligns up with their actions.”

The future of elections

Brown believes that paper ballots still have a place in student elections, but with one caveat: “If you have paper ballots, then maybe bring back parties.” Brown said that expanding the voting period beyond one week could be considered, but would be very tiring.

She believes that online voting with independent candidacy is the best way to vote. “Online voting increases accessibility to everyone. I don’t think it should be 24/7, close it at a certain time.”

Le, however, only partially agrees. “I believe paper ballots can still work but I don’t believe it will be technologically sustainable.” Le favors online voting, but only at designated polling sites. “It’s always going to be difficult to force students to stand in a line,” believing that if they had parties to accompany the polling sites, the turnout would have been met.

Domecillo proposed keeping paper ballots, but opening up an online portal for referenda voting only. “I think online voting is needed for referendums (sic). With how busy students are and how impacted our schedules may be, standing in long lines to vote doesn’t seem practical,” stated Domecillo. Additionally, Domecillo is a commuter from San Diego and suggested that time-and-resource-strapped students may not put the effort into actually voting at a polling site.

How the elections are structured next year will be decided by the next elections director, whose appointment is set to be announced this week, according to Brown.