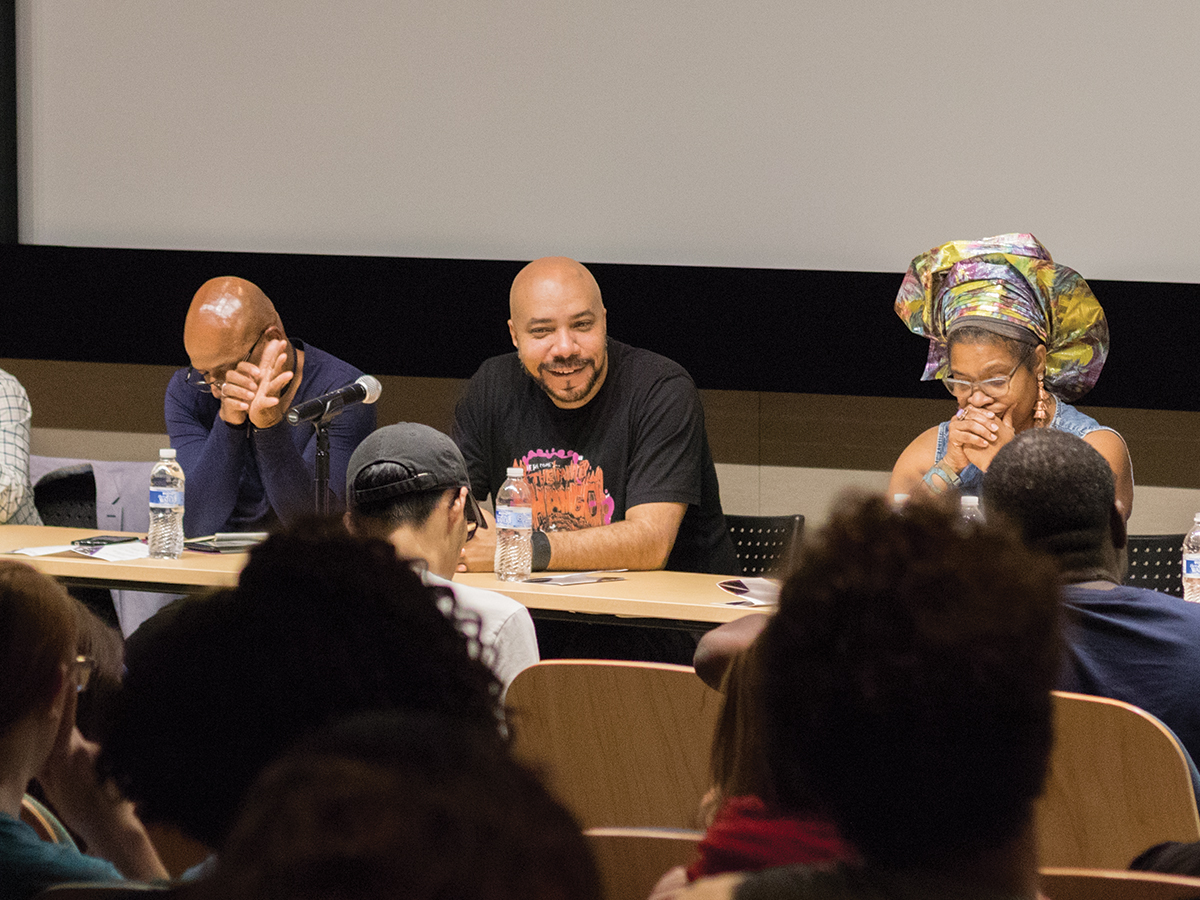 “Why the hell is T’Challa or any one in Wakanda allowing and welcoming that white guy from the CIA?” Professor Dylan Rodriguez asked as part of his opening comment. Criticism, praise and analysis of the 2018 Marvel superhero film “Black Panther” made up the roundtable discussion of the film for the MCS Media Festival on Wednesday, May 16 at INTS 1128.

Rodriguez discussed his main critique of bringing Agent Everett Ross into Wakanda by reading a paragraph from his critical essay “Eulogy for Wakanda/The King is Dead” (originally titled “Fake Ass Panther”). Later on he elaborated on the character of Erik Killmonger and how his radicalism was negatively portrayed in the movie by combining it with U.S. global imperialism. “It really did stand out how there was a conflation between U.S. global imperialism as a millenium project and black American aspirations for armed revolution,” he stated. “They became the same thing and that’s the thing that was killing me.”

Keeling brought up the misconception in Hollywood that black-cast films wouldn’t sell overseas. “I wanted to think about what the conditions were for Black Panther being able to do so well overseas,” Keeling stated.

The presence and absence of children in the film disturbed and fascinated Harris. The only time children are shown in the film are in the beginning and end, yet there are no Wakandan children shown. “There were no children and that correlates to the tradition of not seeing black children in film,” Harris explained.

Self-identified professional geek, Jennings, described his excitement for Wakanda. “As soon as the film started, I was like ‘Wait a minute we’re going to Wakanda for real.’ I really wasn’t ready for it,” said Jennings, explaining how black cultural production deals with trauma. “Vibranium to a certain degree is a reification of black auditory construction,” Jennings began. “It deals with sound and reflection on sound. Shuri creates a method by which (T’Challa’s suit) can accept trauma and redirect it. It was a celebration of black intellectual production.”

As a criticism of the film, Hopkinson brought to attention how a lesbian romance was cut out of the film. “Reading between the lines what I get is ‘We didn’t make (the lesbian romance) a compelling enough story that it actually fit in with the rest of the plotline.’” Another of Hopkinson’s critiques was the whereabouts of the laborers in the “middle- and upper-class black paradise” of Wakanda. “How did Wakanda solve the question that science fiction asks: Who does the menial labor? Who takes up the night soil?” Hopkinson questioned. Hopkinson also shared her initial worries about the film. “When you have someone who’s king, how do you portray anyone as having empowerment and agency?” Hopkinson was satisfied with the film’s director, Ryan Coogler’s, portrayals of the radicalized African women in the film.

The visuals of “Black Panther” have captivated and resonated with audiences and panelists alike. Johnson reflected on the Wakanda salute where one crosses their arms to make a W, yet the gesture looks like an X. “It echoes a lot of things for me,” she began. “I think hip-hop when I see it, but then I also think Malcolm X. I also think of the way this gesture gets adopted, and I’ve seen it in prom pictures and kids greeting each other.” Later on, Jennings praised Johnson’s reappropriation of the gesture and its connections to her experiences when talking about the impact of its visuals.

In relation to the visuals and design of the film, Keeling commented on the portrayal of gender in the scene where Wakabi surrenders to Okoye during the fight in Wakanda. “There’s this moment in which that surrender is also a kind of possibility for a different gender relation. A different kind of gender relation between men and women but also just a different way of imagining what gender could be. That to me when I saw it was an amazing sequence.”

Jennings mentioned his experiences with interviewers asking about Afrofuturism, an art movement in which science fiction themes incorporate elements of black history and culture. “Most of the interviews I had were about this Afrofuturism thing and where does it come from,” he began. “(‘Black Panther’) is not actually Afrofuturist it’s actually Afro now because this is happening right now. It’s not in the future. And I’m like ‘man, y’all are so late.’”