Highlander
Home Radar Beautiful composition and breathtaking animation can’t save “Darling in the FranXX” from... 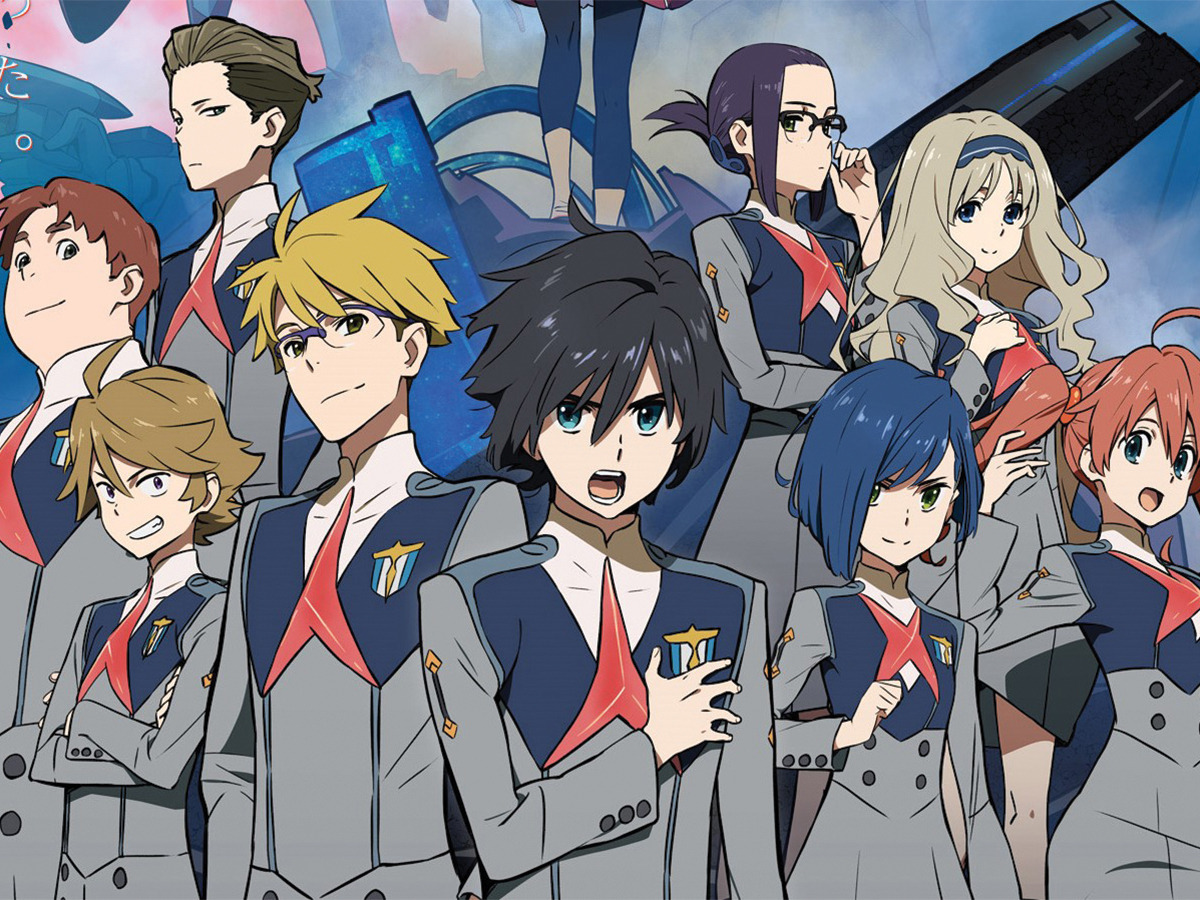 “Darling in the FranXX” has proven to be the biggest disappointment to come out of the 2018 winter anime season. Now, before you think I’m getting carried away, allow me to elaborate: it’s far from the worst show of the season; that title goes to “Ito Junji: Collection.” But compared to the hype that came with the announcement of a series that would be a collaboration from two of the greatest anime studios in the business, A-1 Pictures and Trigger, “Darling in the FranXX” falls extremely short. Now I realize this article might seem a bit hasty to some. After all, there are five episodes left, and the story has reached a turning point of sorts. But this article isn’t just about the problems with the few most recent episodes; don’t worry, we’ll get to them later. The focus of this article, and the real problem with “Darling in the FranXX,” is its utter lack of so many aspects that made its predecessors great.

Truth be told, I don’t have many problems with “Darling’”s first episode; in fact, it’s a good setup. We get a nice monologue from Hiro and Zero Two, which introduces the “bird that shares its wings” analogy quite nicely, especially when we get the callback to it later on. We’re also introduced to the show’s main plotpoint, Hiro and Zero Two’s relationship, and see the polish of this series’ animation; the show feels especially cinematic whenever a scene shifts into a widescreen shot with letterboxing. At this point the world and scale of “Darling” is very unclear, being the pilot episode it doesn’t appear to be a huge issue, since it mostly serves to keep the mystery and wonder of this new world we’ve been thrown into, or so you would think. Unfortunately this vagueness wasn’t a precursor to an actual plot but rather an indicator of the lack of direction and focus that plagues the series.

As the story progresses and we learn the little we do know about the world, we’re left with more questions than answers. What happened to Earth that left it in its current state? Why are children forced to fight as parasites? What are the 9’s? What is the end goal of this series? You could argue that “Darling in the FranXX” is holding its cards close to its chest, but that’s simply not the case. We already know that parasites are conditioned and brainwashed into piloting FranXX, we know that Zero Two and the 9’s are created in a lab, and it’s been made abundantly clear that these characters are just expendable pawns of Papa, or whoever it is that hidden cabal we see every other episode actually is. The series has nothing to gain from not explaining the full extent of the situation. There’s no longer an element of mystery. Instead, “Darling in the FranXX” has just slowly become more and more frustrating because it refuses to give context that would improve the experience and allow the audience to focus on what’s happening on screen.

Before anyone uses the massive exposition dump that was episode 19, as a defense for the series, my point still stands. Rather than just being kept in the dark and having all the information thrown at us at once, discovering tiny tidbits of information and slowly putting the plot points together would have been much more enjoyable.

Speaking of which, “Darling’”s ability to form a cohesive story is shaky at best, with certain plot points either being ignored or just outright forgotten about for episodes on end. A prime example of this is Hiro’s disease, which infects him as a result of riding with Zero Two in Strelitzia for the first time. At the start Hiro is warned that no one has survived riding with Zero Two more than three times, but after doing so and surviving, Hiro proves that this is a special case. However, once we search for any explanation as to why Hiro is special, things get a bit fuzzy. It’s implied that Hiro and Zero Two’s bond is strong enough to make this different, however it’s not confirmed. This all comes together to, like most of this series’ plot points, create more questions than it answers. This isn’t even taking into account that Zero Two has been siphoning Hiro’s life up until episode 13, which would explain the disease. However, episode 17 reveals that after Zero Two’s siphoning has stopped, not only has Hiro’s disease not gone away, but it has now spread and caused him to grow horns. What makes this especially confusing and difficult to follow is that there is little to no mention or build up to these events, which simply happen. I’m not asking for a narrative that’s spoon fed, I simply want a story that isn’t randomly spilled into my lap.

Now I could go on about “Darling’”s plot, I could bring up the fundamental flaws in Hiro and Zero Two’s relationship, and just how unbelievable the entire thing is, or I could mention the catastrophe of a B-story that was the Kokoro love triangle. For interest of time, however, I’ll shift the focus over to another outlying aspect that contributed to its downfall: its action sequences.

The main problem with the action in “Darling in the FranXX” is not the animation; all the fights feel very fluid and it never feels like the show’s budget forced the animators to cut any corners. Alongside the great animation, the soundtrack is spot on; Strelitzia taking flight in episode 15 is a great example of just how well the music and visuals complement each other in this series. However, there’s just one thing that holds these scenes back, with a few small exceptions – they are all extremely boring to watch. Never did I think I would say that I was bored watching an action sequence from the same studio that made “Kill la Kill” and “Gurren Lagann,” but unfortunately “Darling in the FranXX” has surprised me in the worst way possible.

What makes these action sequences feel equivalent to beautifully painted plastic is the complete lack of emotional investment or stakes attached to any of them. Throughout this series, I have never once felt as if any character was at any real risk of actually dying. The closest the series has gotten is episode 9, where the entire crux of the episode comes down to whether or not Goro dies. While watching the episode I was skeptical, and was later proved right, when “Darling in the FranXX” wasn’t brave enough to kill off anyone even remotely important. Goro’s death could have had the same effect of Kamina’s in “Gurren Lagann,” added stakes and a reminder of the mortality of the characters we’re following, but instead the choice to save Goro had the opposite effect. Now, we know that plot armor is protecting our characters and we are certain that no one will die, at least not in any way that’s compelling or satisfying.

This lack of investment and emotional attachment is a result of what is inevitably the biggest problem that “Darling in the FranXX” faces, which is one-dimensional, static characters without any sense of growth. By episode 19, every character in the series is the same as when it started, excluding Mitsuru and Kokoro, but I would hardly call their brainwashing character development. But it’s not just the lack of change that makes these characters so hard to connect to, it’s the fact that all of them feel so one sided. What does Zero Two want other than to be with Hiro? What are Kokoro’s ambitions or goals other than, “I want to have a baby?” Quite frankly there are none, and that’s “Darling’”s downfall. The series has likeable characters with a solid premise, but it lacks the ambition to go anywhere with them. This group of pilots, much like the show itself, never go anywhere, they simply exist.

“Darling in the FranXX” is an extremely flawed show, but it’s far from the worst anime I’ve ever seen. In fact, I can say for myself that there are a few scenes in it that I thoroughly enjoyed, because more than anything this series is brimming with potential. The reason I find this series, quite honestly, tragic is that it was provided more than a few opportunities to diverge from its shaky start. Had “Darling” capitalized on these moments it could have become truly great. But as time went on every new episode seemed to just be an example of that potential being completely squandered. When the series was first introduced it seemed like a perfect combination of Trigger’s edge smoothened out by A-1’s distinct polish, but as time went on the series gave way to foundational issues that led to its downfall.