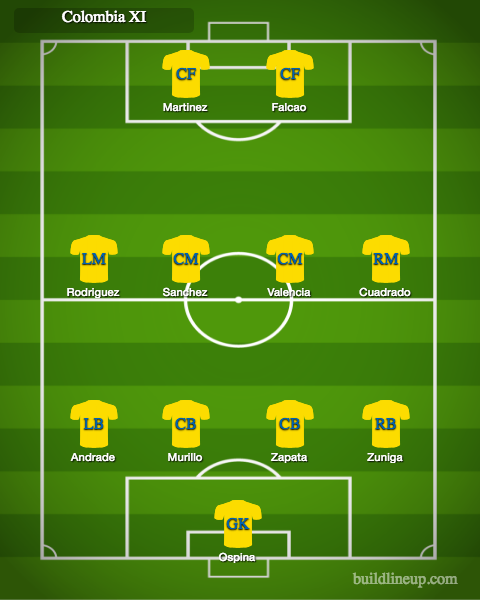 The 26 year-old-midfielder was the breakout star during the 2014 edition of the World Cup, winning the tournament’s Golden Boot Award and earning a move to Spanish powerhouse club Real Madrid.  Since then, however, James endured a tenure at Real Madrid in which he performed well but still struggled to crack the starting 11 on a consistent basis, leading to his loan move to Bayern Munich last summer.  James made the most of his fresh start at Bayern, scoring 7 goals and notching 11 assists in 23 games.  He also boasts a passing percentage of 90% and 2.8 key passes per game, so if all goes according to plan for Colombia, James will be the one pulling the strings for their attack.

The 32 year-old-striker will be heavily relied upon to lead Colombia’s attack in this summer’s edition of the World Cup.  While many would consider him as over the hill after suffering injuries and lukewarm stints at Manchester United and Chelsea, Falcao has found himself in a renaissance of a season for Monaco in 2018, scoring 18 goals and providing 4 assists in 26 games.  He had to miss the 2014 World Cup in Brazil due to injury and this summer he will be hoping to prove that he was the missing piece to a team that made it to the quarter finals..  He still has an immense amount of talent and he seems to have found his feet again, so Colombia will hope he regains the form that has fans calling him El Tigre.

Prediction: 1st in group, Eliminated in round of 16