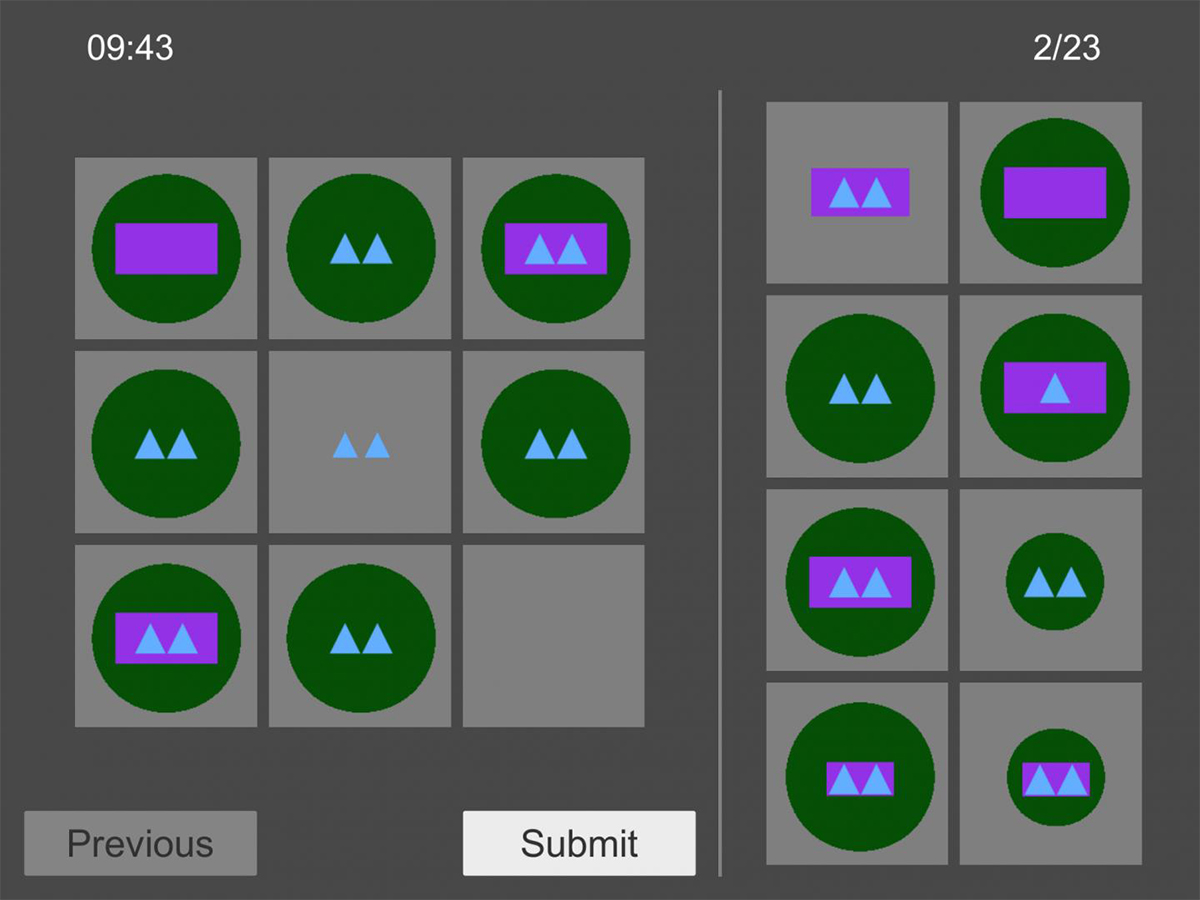 Psychologists at UC Riverside and UC Irvine have developed the University of California Matrix Reasoning Task (UCMRT), which is being touted as an efficient alternative to the Advanced Progressive Matrices (APM), both of which measure fluid intelligence.

The UCMRT is a free test accessible on mobile devices that is highly comparable to APM. Developed by John C. Raven in 1936, APM has been administered for about 82 years. APM is programmed to measure the reasoning ability of those who take the test through a 36 question complete-the-pattern problem set. APM takes roughly an hour to complete and can cost upwards of a $100 for each test. Anja Pahor, a postdoctoral researcher who designed problems for UCMRT and first author of the journal Behavior Research Methods, states “We made UCMRT because we realized that existing measures of reasoning ability were not well suited for the studies we are conducting at the Brain Game Center. As a first step, we used matrices constructed by Sandia Laboratories. Later on we went through multiple cycles of development, testing, data analysis and refinement of test items, which eventually gave rise to UCMRT.”

UCMRT has three different versions, each consisting of 23 questions and taking about 10 minutes to complete, for measurements that are tantamount to those of APM. As Trevor Stavropoulos, lead developer at the Brain Game Center for nearly three years and UCMRT software creator, states “The UCMRT was inspired by preceding Matrix Reasoning tasks, going back almost 100 years to Raven’s original progressive matrices. The basic idea of a matrix reasoning task is that the subject is shown a grid of images (usually one or several geometric shapes), but with one space missing, and they have to figure out what goes in the missing spot by deducing what the rule is that relates them. Much as our task does now, Matrix Reasoning tasks have historically been used to assess a concept called ‘fluid intelligence’, which is generally one’s ability to think outside of the box.”

UCMRT assists the progress in repeated testing of fluid intelligence. Pahor stated, “In the context of UCMRT, we are focusing on fluid intelligence, which is defined as the ability to solve problems without relying on explicit knowledge derived from previous experience.” As such, those who do poorly on the UCMRT are not considered less intelligent than those with high scores. Pahor added that she “would like to stress that UCMRT measures only one aspect of nonverbal fluid intelligence. To accurately assess one’s intelligence, a multitude of different tests needs to be administered.”

High scores on the UCMRT have corresponded with high performances on math tests, college admissions test scores, and college grade point averages which are similar in result to those of APM. As “Behavior Research Methods” states, “In fact, performance on UCMRT correlated significantly with all ACT subtest scores (Math, Science, Reading, and Writing), whereas performance on APM showed significant correlations only with ACT Math.” Pahor explained that, “Of the 713 students who took UCMRT, about 230 students took both tests, UCMRT correlates with APM about as well as APM correlates with itself.”

Going forward, Pahor stated that, “By making the test available to researchers, we hope to help the scientific community.” She later added that she “hope(s) that researchers will recognize that it represents a viable alternative to the original test and will find include it in their studies. Moreover, I hope we can improve the test by generating more alternate versions and versions that are suited for different age and ability groups.”

Regarding future plans, Stavropoulos said, “We also have some projects trying to do the mobile tablet revitalization for other domains entirely.  We’ve have (sic) a grant from NIH where we are working with researchers associated with the V.A. system (Veterans Affairs) to develop robust, iPad-based hearing tests that will eventually be deployed through the VA Hospital system so that general practitioners … can administer state-of-the-art hearing tests for veterans.”

Editor’s note: Anja Pahor was referred to as ‘he’ several times in an earlier version of this article. Corrections have been made.