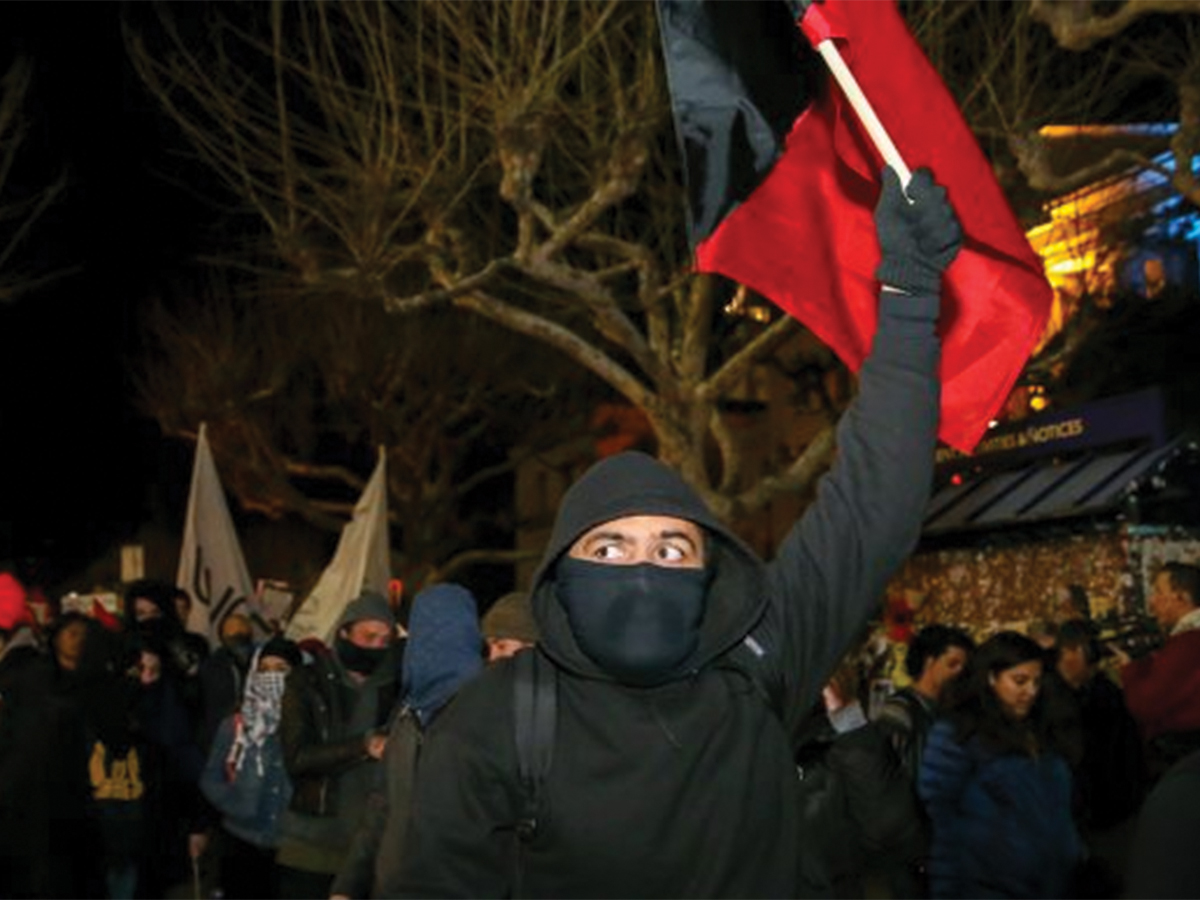 On Wednesday, Nov. 7, a group of “anti-fascist” protesters gathered outside of Tucker Carlson’s home in Northwest Washington D.C. The local anti-fascist organization (ANTIFA)  stayed for roughly 15 minutes until local police officers arrived. In that short time, the organization showed their true colors by threatening Carlson’s family, damaging property and overall straying from the true purpose of a protest.

Tucker Carlson was not home at the time of the incident, but his wife was frightened since she was home alone and heard sudden screaming and pounding at the home’s front door. Also, Carlson has claimed that protesters put Carlson’s home address online and placed posters at the front steps of the house with the addresses of Carlson’s brother and best friend from college. Thus, what began as a protest against Carlson immediately extended to family members and close relatives.

The protest eventually became a threat, and the people that were fighting against fascism ended up utilizing disruptive and disrespectful tactics themselves. Furthermore, this organization proved to be another un-American and uncivil menace to society due to its attack on the fundamental American values of free speech and civil protest.

There is an important distinction between peaceful protests and the events at Carlson’s house. The right to protest is a constitutional right that everyone is more than welcome to practice — regardless of one’s belief, creed, ideology or political agenda. Problems arise, however, once tactics that tear at our social fabric or put people’s safety at risk are wrongly justified in the name of this right.

It is quite true that disruptive tactics are sometimes necessary to shed light on certain subjects, and in more extreme cases, society needs some sort of martyr to be called into action. For example, consider the heavy influence of Rosa Park’s arrest and the Freedom Riders towards the passing of the 1964 Civil Rights Act, or the global social upheaval against South Vietnam’s dictatorship which stemmed from Thich Quang Duc’s self-immolation in the busy streets of Saigon.

These protests, while technically illegal at their time, breached decorum in a constructive and meaningful way. In Carlson’s case by comparison, the term “protest” starts coming into question once we begin to consider the specifics of this instance.

First of all, ANTIFA’s incivility became clear once personal information was leaked and Carlson’s family was put at risk. It is quite true that society often drills into the personal lives of politicians and political pundits, but it becomes rather disturbing when one’s address, personal details or family and relatives are put at risk.

The organization also defaced Tucker’s property by spray painting an anarchy symbol on his driveway and allegedly creating a crack on Tucker’s front door. Hence, on top of unsettling a family, the protesters decided to further disturb Carlson and his family by leaving marks of their physical presence.

As if these two elements weren’t enough, people were heard chanting, “We know where you sleep at night.” Also, in now-deleted video footage, Carlson claimed that a woman can be heard stating that she wanted to “bring a pipe bomb.” Regardless of whether or not the above statement is true, any constructive element of this protest is invalidated in the presence of such tactics.

Anyone that disagrees with Carlson or his political views can quite easily voice their discontent publicly or even protest him in a much less threatening setting. For example, a member of the organization could have asked Carlson to a debate on Fox, or protesters could’ve held a peaceful rally protesting something Carlson said or believed.

The protest gone wrong at Carlson’s house is unfortunately not an isolated case. Local chapters of ANTIFA were also the main culprits behind most of the riots and acts of incivility on various campuses in recent years, most notably at UC Berkeley during the riots in 2017. Milo Yiannopoulos was scheduled to speak at the campus, but the organization ignited fires, threw rocks, fireworks and bricks – which cost Berkeley $100,000 in damage repairs.

Apart from the destruction of property and bystander injuries, the organization attacked the right to free speech by banning Milo and other conservative speakers, indirectly canceling “Free Speech Week” and, at UC Davis, a Republican college group had to cancel an event due to protests and possibilities of violence.

Overall, it is quite worrisome to consider that organizations such as these are discouraging intellectual conversation and forcibly silencing pundits from sharing their opinions. As if attacking free speech wasn’t enough, these organizations further employ incivility to get their points across. Thus, the incident at Carlson’s house shouldn’t be seen as a new phenomenon or outlier event. It is only a drop in an ever-growing sea.

One at UC Riverside might not worry too much considering that the organization’s presence has been heavier on other campuses, but it is important to note that if incivility and violence are not criticized or decried, they may soon become even more commonplace in political protest.

UC Riverside claims to be a decent representative for free speech, and has generally lived up to its promise. As UC Riverside’s “Principles Guiding Speech and Assembly” states, “UC Riverside is committed to the belief that free speech, expression, and peaceful and lawful assembly are rights that must be protected, valued, and encouraged.”

Although UC Riverside usually protects individuals’ right to free speech, this is the exception rather than the norm, as other campuses are struggling due to organizations that blatantly disregard these fundamental liberties. I say usually because just as students have been allowed to protests Trump’s immigration ban or rally at the Republican club, student protests have been disrupted by police forces and campus security (most notably at the UC Regents’ 2012 meeting). Regardless of what campus, however, organizations should only be allowed and supported once they protest peacefully and allow other voices to be heard.

Humanity has gone through dark and troubling times, but it somehow manages to fight through and emerge better than before. We can only hope to share this world by peacefully settling our differences and preserving civility and respect in our dialogue.

Organizations such as ANTIFA are only degrading the political discourse. Although there is still time and hope for everyone to address such a problem as the one we are facing right now, the rise of incivility, on both sides, is an ominous sign. Echoing Helen Keller, “…like the little deaf, dumb, and blind child I once was, mankind is growing out of the darkness of ignorance and hate into the light of a brighter day.” The only way to reach that light is to prevent our political discourse from becoming dangerous, violent and intolerant of those we disagree with.