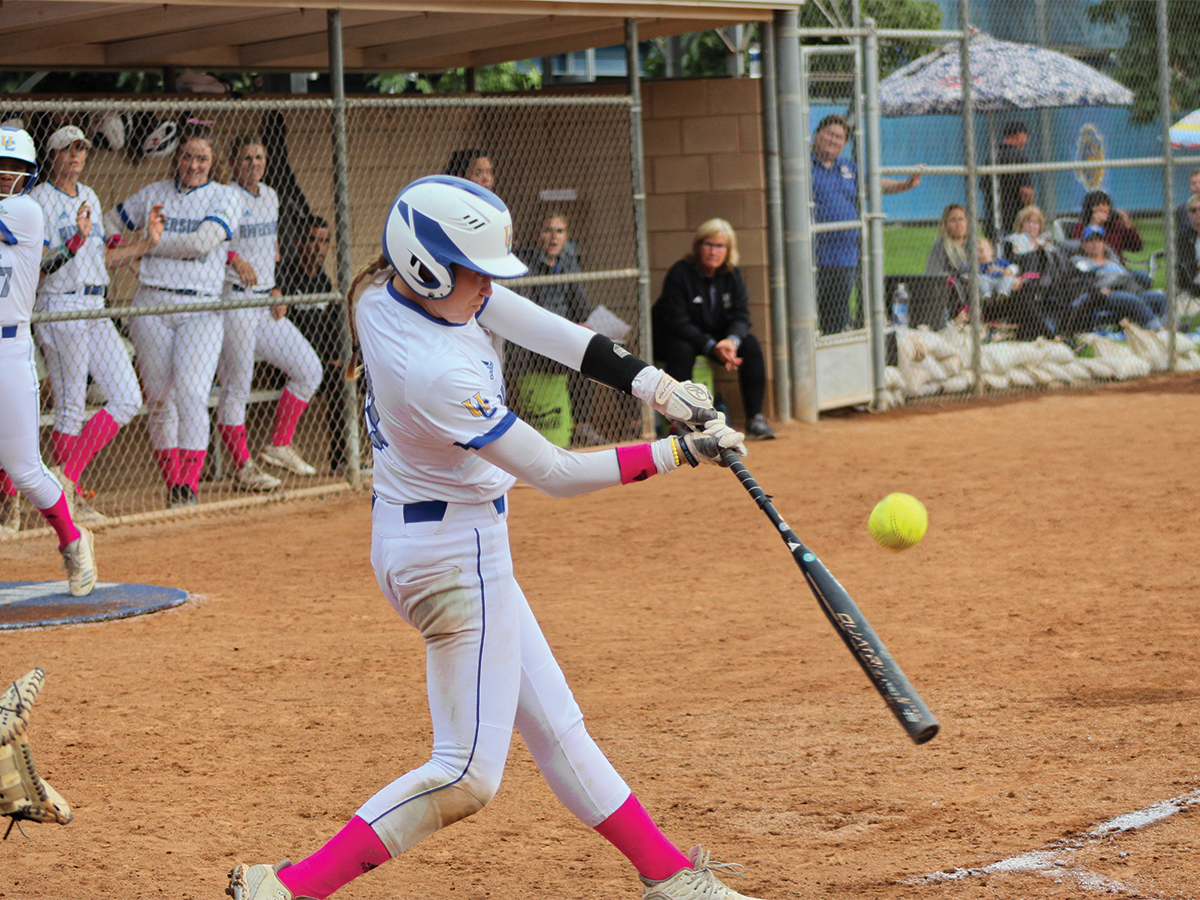 UCR softball (26-25, 8-13) started their final series of the regular season at home on Friday, May 10 against Cal State Fullerton (38-16, 18-3). The Highlanders faced off against the Titans twice on Friday before finishing the series on Saturday, May 11.

In the first game of the Friday doubleheader, Riverside was unable to stop Fullerton’s offense and went down 5-3.

The first run for both teams came in the second inning. The Titans got on the board first when junior catcher Julia Valenzuela hit a double that brought sophomore infielder Sam Kennedy across the plate. For UCR, the run came off of a solo home run from senior first baseman Amanda Lynch. Valenzuela struck again later in the game as she hit an RBI single in the fourth inning and a two-run homerun in the sixth to give Fullerton a 4-1 lead.

The Titans scored again in the seventh inning off of a wild pitch to extend their lead to four runs. The Highlanders made a comeback effort by scoring two runs in the seventh, but it wasn’t quite enough to change the outcome.

Lynch and senior shortstop Hannah Rodriguez each finished with a team-high two hits.

In the second game of the doubleheader, the Highlanders were able to keep it close until the top of the sixth inning, when Fullerton scored seven runs to seal their 14-6 victory.

The Titans started right where they left off in the earlier game, scoring five runs in the first two innings while simultaneously holding UCR scoreless. Riverside was able to have their best offensive showing in the third inning when they responded with four runs and cut the deficit to one. Olmos’ three-run homerun was the highlight of the offensive surge. Fullerton scored one run in each the fifth and sixth innings while also holding the Highlanders scoreless. Titan sophomore Janelle Rodriguez stepped up for her only at-bat of the game in the sixth inning and hit a grand slam to put the game out of reach.

Junior pitcher Jacy Boles started on the mound for Riverside but only pitched 1.1 innings. Boles allowed seven earned runs on her way to her ninth loss of the season.

UCR’s final game of the season took place on Saturday, May 11 and was the series-finale against Cal State Fullerton. This game also marked UCR Softball’s senior day matchup as it was the last regular season game the program’s seniors participate in.

The Titan’s continued their domination over Riverside, winning easily 7-2. The game was scoreless through two innings before Fullerton strung together four runs in the third, and three runs in the fifth inning. Fullerton freshman first baseman Daisy Munoz hit a three-run shot to left field to give the Titans a 7-0 lead. The Highlanders were able to score two runs in the seventh inning, but ultimately came up short.

Riverside finished the regular season in sixth place in the Big West Conference with an 8-13 conference record, and a 26-25 overall record. UCR softball will be losing Hannah Rodriguez, Brittney Garcia, Amanda Lynch, Bayleigh Heineman and Rebecca Faulkner to graduation.